Guest article from an associate of Resisting Hate who wishes to remain anonymous.

Last year I was assaulted and heavily injured, my crime, wearing a Remain button and having a slight accent, luckily my dog who was roaming in the bushes heard me scream and saw the attacker off, which stopped him from doing more damage than “just” a fractured cheekbone and a few long lasting bruises from being kicked while being down.

My attacker was a sturdy white guy, dressed in jeans and a bomber jacket, heavily tattooed and he kept telling me that the EDL would take care of me, because apparently I’m a “benefit thieving foreign cunt”. 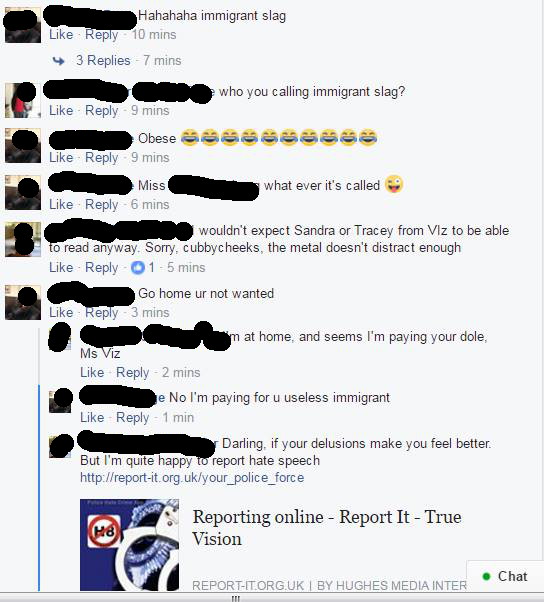 To bore you with some facts, I’ve never been on benefits, I’m an EU citizen who’s married to a British citizen, we own our own company and according to our accountant we are in the top 10% bracket, so yes, I do pay quite a bit of tax.

Another boring fact: I didn’t come here for the “better life” – my quality of life is considerably worse than it was before, I’m not trying to be rude but even after more than 10 years I do have trouble to adjust to the lack of things I took for granted in other EU countries. Timely medical appointments and treatment with an eye on prevention (not the fault of the NHS but due to the lack of funding), houses that are well insulated as standard (not only cheaper also environmentally viable) and have living space, quality public transportation for reasonable prices, a choice of healthy food that isn’t ridiculously expensive…

The reason I came here was my husband and the fact that for me there was no language barrier as there would have been for him, if he would have moved. Due to the nature of my business being international, it was easier for me to relocate so we bought a house together in the UK and from day one I paid tax here.

The first 9 years, it was mainly getting used to the time warp, I used to joke about that this is how my parents or grandparents possibly lived. Estate agents were shocked that I said I absolutely need a kitchen that can accommodate a dish washer, I was told to just do the washing up, I explained politely that we both regularly work 10 to 12 hour days, it is the 21st century and a dish washer is just a regular modern appliance I’m used to. I got some very strange looks. Next hurdle was a hallway, no, I don’t want the front door opening into my living room, several reasons, it’s a lack of privacy and cold in winter. Just to clarify, we weren’t looking in or around London, but in an affluent Northern area. We made clear that space is quite important, the UK concept of space is certainly different than the European one, here a full bedroom means the room is full if you put a bed in it…

I got used to a lot of things (even the weather) a banking system that’s archaic even the lack of customer service (!) I’m a social person and there isn’t a lot of culture available without massive travel. There are pubs but I’m not a big drinker and a bit of a health freak. Ordering a still water in your average UK pub will get you some strange looks, if you’re lucky you can order a tea or coffee. Quite different to the rest of the civilized world.

As an animal lover (we have several rescue cats and dogs) I got involved with local animal charities and then other charities, as I noticed the level of poverty in the UK was quite shocking and has become progressively worse due to massive cuts. I have moved around quite a bit in my life, not just countries but also continents, and always thought wherever I live I should contribute to the society, not just with tax but also with practical help.

You could say I was somewhat settled and had made the UK my home. Work regularly brings me to other European countries and the US, but this was “home”, then the talk about the referendum started and things changed dramatically.

As a responsible dog owner, I clean up after my dogs, if I see somebody’s dog fouling in a park or on the road and they don’t pick up, I politely offer them a “doggie bag”, pretending they must have forgotten them. In the past on occasion they might have told me to mind my own business, now I regularly get yelled at to “Fuck off back where I came from, this is England” – I guess I must look lost?

Not only did I get assaulted, I had people verbally abusing me, spitting in my face, telling me to “get out, we won”, my dogs were called foreign dogs (they’re all English rescues) and I should get “English dogs, this is England!”

On social media I was forced to drop my maiden name from all profiles due to serious abuse and threats (I’ll mention again, I was never on benefits or social housing), I had people tracking me down, posting my address with suggestions they would “visit” me, accusations that I must be a prostitute, a migrant maggot, a foreign slapper, even people telling me they’d like to punch me.

When I mentioned that I was assaulted (chillingly on the same day as Jo Cox was killed) I was told I wasn’t punched hard enough and why was I complaining as I was just “roughed up a bit, not even raped”. I was even accused of making the story up! (Yes, apparently the police and medical records too). 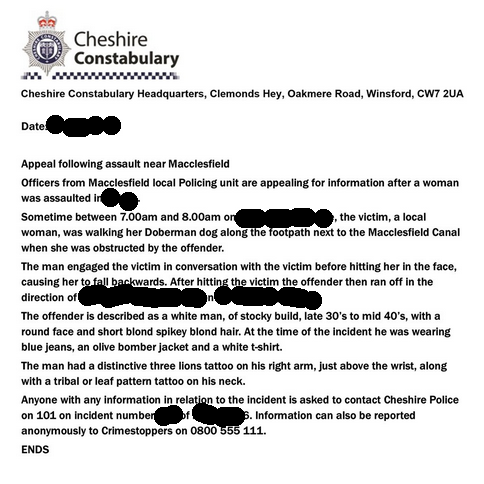 To sum things up, the UK doesn’t feel like my home anymore and hubby and I are looking to move somewhere where racism and xenophobia isn’t as rampant as it is in here. Naturally we’ll take our taxes with us.

To quote Douglas Adams: So long, and thanks for all the Fish.