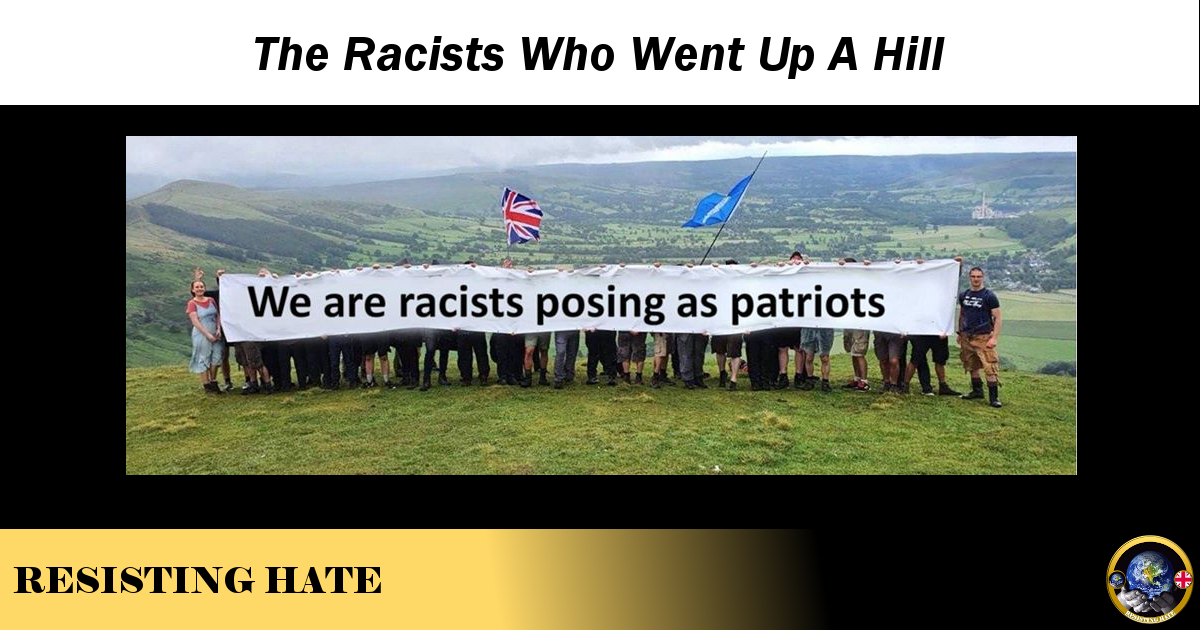 Whichever member of Nazi hate group Patriotic Alternative thought it was a good idea to haul a bunch of racists up a hill in Derbyshire to display a huge (very editable banner) saying “White Lives Matter” to an audience comprised entirely of sheep frankly wants their head testing.

Whether it was full on Nazi Mark Collett or dithering tea obsessed Laura Towler remains to be seen. But our thanks to them anyway as their badly executed, pointless stunt gave Resisting Hate, along with huge sections of social media, the best laugh we have had at fash in ages.

Below is the official Telegram channel for Patriotic Alternative (don’t bother deleting it, we’ve got screenshots of all the racism). It’s a hot bed of white supremacism, hatred, racism and astonishing stupidity.

This is how Patriotic Alternative members saw their banner stunt…

But although they did get a lot of attention on both Twitter and Facebook, the responses were not exactly pro fash. I strongly suspect Mark and Laura haven’t bothered to read any of the comments on their posts as even their naive optimism would struggle to put a positive spin on the huge numbers of people mocking Patriotic Alternative for this racist nonsense.

In fact, after reading all the comments, I’d estimate only about 2% of the social media comments supported these racist prats while everybody else called them out for cowardice, racism and an unusually weird desire to preach far right politics to sheep…

They say all publicity is good publicity but this very public failure will be anything but good for Patriotic Alternative. They have shown themselves up as bunch of idiotic racist cowards, trekking all the way up Mam Tor to tell a load of sheep that white lives matter. There’s an irony in there somewhere though… Baaaaa.

2 thoughts on “The Racists Who Went Up A Hill”