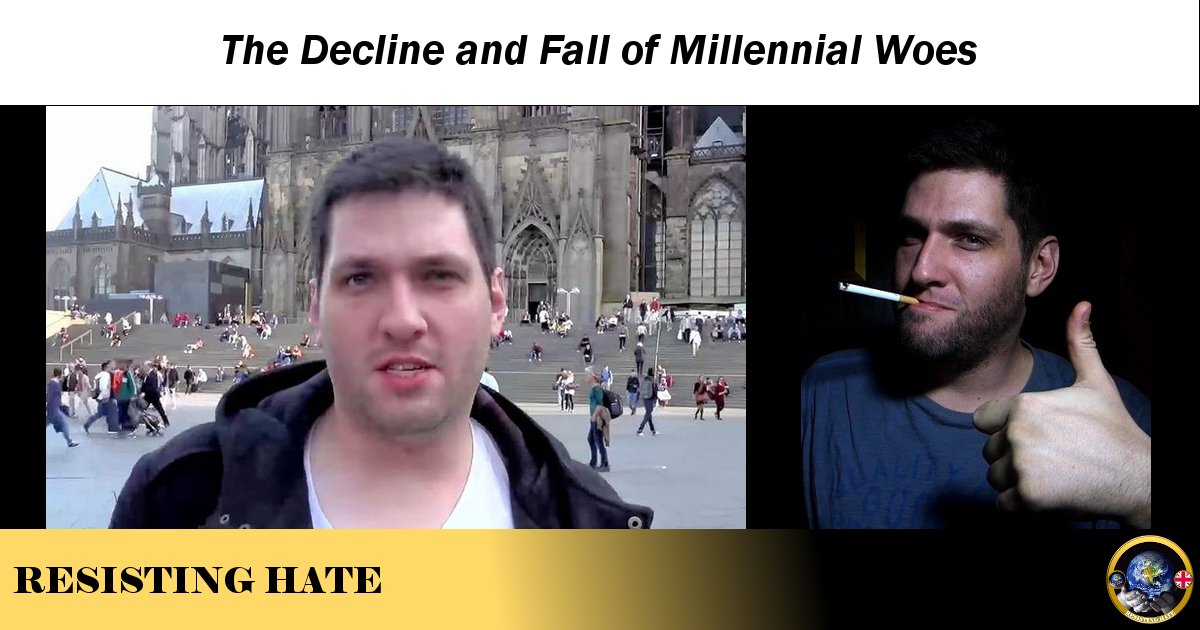 In the past few days Resisting Hate has learned of the “disavowment” by known neo-Nazi, anti-Semite Mark Collett, and leader of Patriotic Alternative, of the 37 year old Youtube personality, white nationalist and anti-Semitic conspiracy theorist Millennial Woes aka Colin Robertson.

These concern serious allegations aimed at Robertson regarding his alleged inappropriate behaviour with a female attendee at the Patriotic Alternative conference, over the weekend of the 14th of March 2020.

Robertson is now banned from any future conferences and involvement of any kind with Patriotic Alternative and has been disavowed from the far right Movement.

It all began when Robertson released a message through Telegram, on the 28th of April, 2020, announcing that he would “be taking a break from the “Britnat” movement”, and he would “no longer be involved in or associated with any organisations” and no longer “be appearing at events nor helping out behind the scenes”. He stated further “I want to be free of the movement and I think the time is right for it to be free of me”.  With his withdrawal from the Movement as a time to ‘focus’ on ‘self-improvement’, Robertson declared “my life is not as under control as it should be”.

Through self-reflection Robertson then goes on to say “I want to look inward, and deal with the character flaws that I have neglected. People look up to me; it is not right for me to allow them to do so, unless I can improve substantially from my flawed state.” ending with “I need some professional therapy – for stress and addiction”.

The following day on the 29th of April, 2020, Collett live streamed through YouTube, together with No White Guilt and Iconoclast, a choreographed damage limitation exercise to distance Patriotic Alternative and its leadership from its disgraced associate, Robertson.

These two events were then discussed at length by Ethan Ralph, host, founder and co-creator of #killstream and owner/editor-in-chief of The Ralph Retort, by himself and guests, together with the screenshots (see below) of text conversations concerning allegations of Robertson’s past inappropriate sexual behaviour.

Ralph was later to claim he had spoken to reliable sources concerning the alleged incident, in what is believed to be a serious sexual or indecent assault perpetrated by Robertson, on a female delegate believed to be 20 years old, at some point over the weekend of the Patriotic Alternative conference.

Ralph later confirmed this information during a broadcast made on the 30th of April 2020 that “I [Ralph] doubled checked, that, that is the, that it was you know, him [Robertson] forcing the oral, doing oral on her against her wishes.”

The overall definition of sexual or indecent assault is an act of physical, psychological and emotional violation in the form of a sexual act, inflicted on someone without their consent.  It can involve forcing or manipulating someone to witness or participate in any sexual acts.

This is not an isolated incident, Robertson has a history of reckless, unsolicited and predatory sexual behaviour, with alleged activities that included, if the text conversations captured in the screens shots above are purported to be true:

Since posting his Telegram message, uploading his last YouTube video on April the 26th, 2020 and deactivating his twitter account @Melvyn_Waters soon after, Robertson has issued no further statements to either collaborate or dispute the claims circulating on social media.

Even though the above allegations are unsubstantiated concerning the alleged assault at the Patriotic Alternative conference, together with accusations of sexual deviance regarding Robertson.  It has been sufficient for Collett, a long term friend of Robertson’s, to disassociate himself and disavow Robertson from the far right Movement.  It would appear too many that the Patriotic Alternative leadership are fully aware of Robertson’s alleged sexual assault and past episodes of indecent behaviour.

Collett contradicts himself, on the one hand he wants to be open about the alleged incident, and on the other, closing down any conversation relating to it, by using Entropy, a chat livestream tool where users can vote up or down questions posed by the audience.  At the same time distancing himself from the human train wreck that is Robertson.

Collett is desperate to keep this covered up, its implications are both embarrassing and detrimental to the leadership of Patriotic Alternative.  In particular, when the above purported rumours have been circulating in far/alt right social circles for some time; why has Collett allowed such a broken, immature, narcissistic, manipulative, misogynistic, degenerate and sexually deviant individual who is undoubtedly a danger to young women influence his organisation?

These revelations will come as a hard blow for many of Robertson’s fans and those positioned on the far and alt-right, for a man once lauded as the saviour of the white civilisation, just like the proverbial shit sandwich, it will be hard to swallow.

As can be clearly seen when trawling through the cult like and disturbing comments left on the Millennial Woes YouTube channel.  Messages of support, condolences and advice for Woes but very few if any messages of condemnation; and none that show any empathy or compassion for the young woman who is Robertson’s alleged sexual assault victim.

One thought on “The Decline and Fall of Millennial Woes”