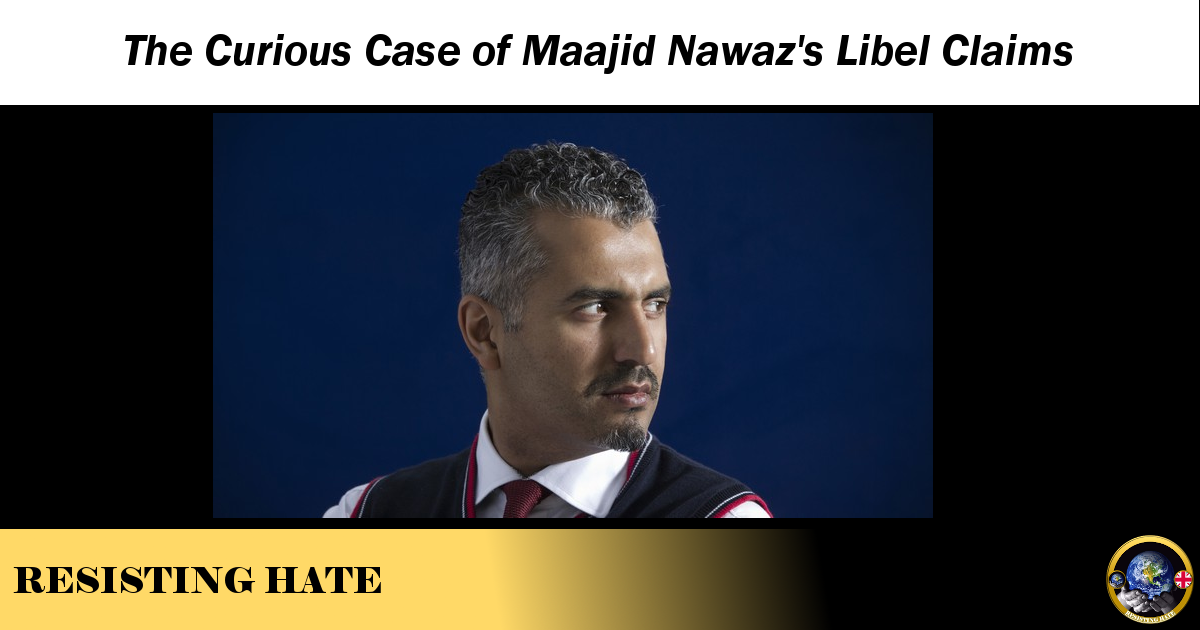 Those familiar with Maajid Nawaz, LBC Radio presenter and founding chairman of Quilliam Foundation (an anti extremist think tank) will be aware of his dogged pursuance of anybody who suggests him to be either a terrorist/former terrorist or an extremist/former extremist due to his previous association with Hizb ut-Tahrir and his subsequent imprisonment in Egypt where the organisation is banned.

This article is not about the intricacies of whether or not Nawaz was a member of a designated terrorist organisation but about who he pursues alleging libel about him in relation to his membership of that organisation.

It is important to clarify that Resisting Hate are offering no personal opinion or speculation as regards the validity of any of the claims or allegations regarding Nawaz. We have seen no evidence to accuse the man of anything untoward or to suggest he is anything other than a law abiding citizen of good character.

So far Nawaz has successfully secured financial remedy and apologies from several individuals and organisations for variously labelling him as an Anti-Muslim Extremist, a former terrorist and an extremist. Most notably from Southern Poverty Law Centre (SPLC).

Nawaz most recent receipt of an apology and a donation to Quilliam Foundation on threat of legal action came from Aaron Bastani of Novaro Media after a tweet Bastani put out stating Nawaz is a former terrorist.

The excellent @zelostreet blog covered the initial outbreak of indignation and legal threats by Nawaz here, prior to Bastani’s capitulation on notice of legal action.

Note the historical reference where Yaxley-Lennon (aka Tommy Robinson) stated in a piece published by the Telegraph on 18 October 2013 that ‘They don’t say that to Maajid Nawaz today. He was in Hizb-ut-Tahrir, he did six years [in prison] in Egypt for terrorism.’

The piece is still up online and when challenged about why Nawaz did not go after both Yaxley Lennon and The Telegraph at the time he claimed he was unaware and has now run out of time. Fair enough, but he still has recourse to try and have that article removed from the internet yet so far he appears to have made no attempt to.

Only 10 days prior to the Telegraph publication, Maajid Nawaz and the Quilliam Foundation held a highly publicised press conference announcing their facilitation of Yaxley Lennon’s extraction from the English Defence League (EDL). So one does have to wonder how Quilliam were unaware of this interview given their newly acquired project of attempting to rehabilitate a far right Islamophobe and leader of a racist street movement into polite society. Surely they must have been keeping a tight watch on what Yaxley-Lennon was giving to the press in case he dropped them and their credibility in it.

Whilst The Telegraph article is out of time for any action other examples are not.

As recently as 2018, online newspaper The Times of Israel published a sympathetic piece on Maajid Nawaz and his journey from radical Islam to staunch Israel ally, yet led the piece by stating he was jailed for ‘espousing extremism.’ Also the New York Post in 2017 covered his impending case with SPLC amongst other things but opened the piece calling him a ‘former Muslim extremist.’

Again, there appears to be no evidence of any proceedings for defamation in either case. That both publications are right leaning, and that is being generous, may be a clue, or not.

So given Nawaz’s aforementioned appetite for threatening legal action against those he claims defame him (which of course he has every right to do) some uncomfortable questions need to be asked about his cherry picking with regard to those he chooses to pursue.

Enter Stephen Yaxley-Lennon aka ‘Tommy Robinson.’ Despite earlier associations with Quilliam Foundation and Yaxley-Lennon there appears to be no love lost between him and Nawaz since they parted ways. In April 2020 Nawaz picked up on a visit Yaxley-Lennon made to Russia in February 2020 to publicise his deeply flawed and controversial documentary about Pakistani grooming gangs with the inflammatory title, The Rape of Britain, and Nawaz decided to express his disapproval on Twitter.

The backlash from the cult of Tommeh was immediate and is all documented on Twitter for those who care to look. Nawaz felt the need to remind everyone that it was he who had spoken out for longer than most about grooming gangs and how dare Tommeh take away his thunder,

This is where things gets interesting … Yaxley-Lennon responded to Nawaz’s criticism of him with a series of videos where he explicity states that he considers Nawaz an ex-extremist who was part of a group proscribed by many countries as a terrorist organisation, thereby implying Nawaz by association was a terrorist. We have retained the footage of Yaxley Lennon making these statements and will be happy to pass to Nawaz or any other interested party. The footage can also be viewed here.

Yaxley- Lennon was particularly miffed as he interpreted Nawaz’s remarks as a comment on him being a traitor to his country and also believed that his (Yaxley Lennon’s) free speech was being denied unless Nawaz would have him on his radio show for a right to reply.

Instead of issuing Yaxley-Lennon with any defamation notice Nawaz amplified the video on his own feed sent to him by another far right prolific Yaxley-Lennon supporter who runs the @DawkinsReturns account and who is closely affiliated with Yaxley Lennon.

Why did Nawaz do this? Why give oxygen to the libellous claim when he has been so quick to sue others who have said exactly the same thing?

Of further interest is the fact that a very close associate of Yaxley-Lennon who runs the account @harvingtonTR (after his previous account was permanently suspended) went one step further and posted two tweets claiming that Nawaz is a ‘coward and former terrorist’ and a ‘so called former Islamic extremist.’

Which is about as libellous as libel gets…

Despite stating Nawaz has him on Twitter block @harvingtonTR tagged him in and also used the hashtag #maajidnawaz on the second tweet to ensure it was seen by Nawaz. The tweet has since been liked and retweeted many times and is still up on the @harvingtonTR account. One responder advised the account it was ‘Time to get yourself a good lawyer. Maajid has a 100% success rate so far…..could be expensive!’

Indeed it could get very expensive. But it hasn’t so far. In fact there has not a peep from Nawaz on the matter as yet. We are interested as to why that is the case…

There are several possible scenarios, Nawaz simply may not have seen the tweets (which seems unlikely given he appears to trawl for any comments levelling the dreaded T word against him), Nawaz has an agenda that only those on the political left wing are worth pursuing (despite the far right being much more prolific in peddling every kind of bigotry and racism known to mankind) or Nawaz only pursues those with a large audience and the means to cough up substantial financial redress.

Given that Yaxley-Lennon has a substantial audience (though we at Resisting Hate are working on that) and an even more substantial bank balance it is unlikely Nawaz chose not to sue him due to inability to afford redress.

As @harvingtonTR is a well known close member of ‘team Tommeh’ this puts Yaxley-Lennon squarely in the spotlight to take responsibility for the comments his team make on his behalf.

So why didn’t you sue the pair of them Maajid?

What is the difference between the tweets below? Why would you choose to take one libellous account through the courts and ignore the other completely?

And more to the point, now it has been brought to your attention, what are you going to do about it?

Helpfully we have captured the unique twitter identifier for the defamatory allegation posted by Stephen Yaxley-Lennon’s associate so, should it get deleted, we can provide details of the owner of that account to lawyer Mark Lewis should you instruct him to act on your behalf again.