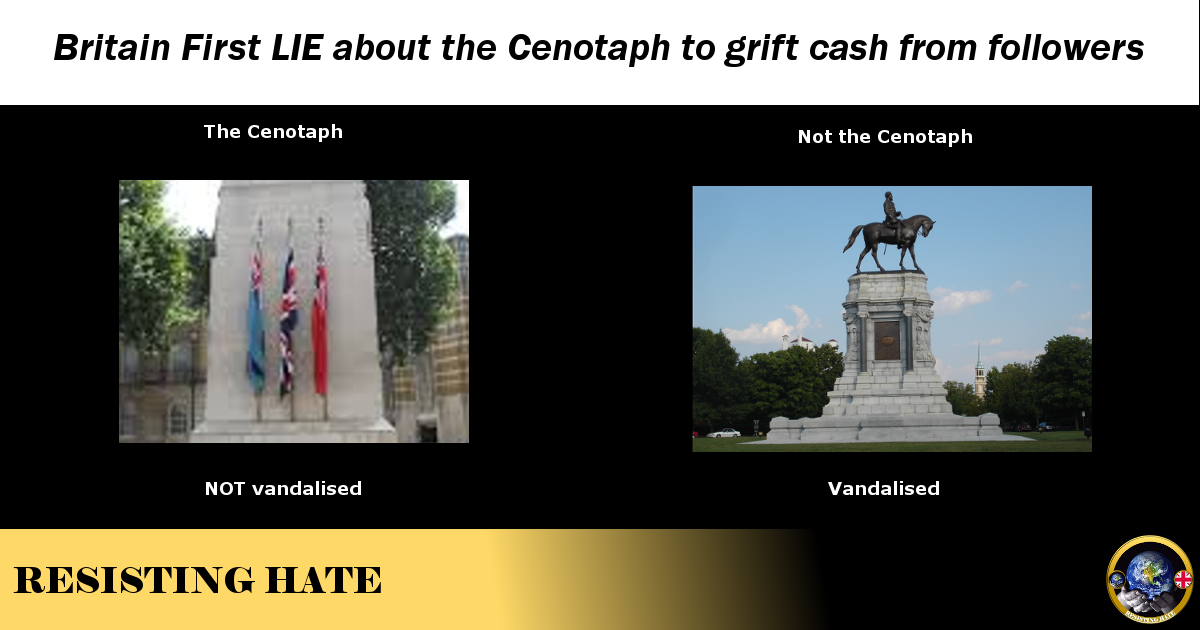 Nothing matters more to the grifting scumsbags at Britain First than leeching money off their gullible and racist followers. They will tell any lie to keep their bank accounts topped up and prevent them from ever having to be in a position where they have to get real jobs rather than just relying on stupid people to hand over their hard earned cash.

But the email Britain First sent out yesterday to their followers was their most blatant lie yet. A total barefaced untruth sent out simply to incite people to hate the Black Lives Matter movement and to scam a few quid off the bigots who subscribe to their newsletter in the process.

This is the email:

The hard hitting headline They VANDALISED the Cenotaph followed by the first picture which is a genuine unvandalised picture of the Cenotaph (taken in 2010 which has NOTHING to do with the BLM protests) is then followed by a picture of a vandalised statue which is NOT the Cenotaph. Which, after 30 seconds of googling, should be apparent to even the stupidest fascist.

The statue that has been vandalised is the Robert E Lee Memorial.

It is a structure in Virginia, USA. So what interest it is to a group that claims to be all about Britain, I don’t know. Also, unlike the cenotaph it is not a tomb, it is a statue. The BLM movement were not defacing a grave or a tomb, they were defacing a statue raised in memory of a military leader who led the Confederate army during the American Civil War in support of slavery of black people.

It is hardly surprising that such a statue would be targeted by people who are the descendents of the unjustly enslaved. Nor, I am glad to say, is it surprising that the memorial is now going to be removed as a result of the protests and in acknowledgement that a pro slavery symbol belongs to our past and not our future.

The Metropolitan police have put out a statement confirming the Cenotaph was NOT vandalised and that malicious rumours have circulated on social media by people trying to defame the BLM.

I highly doubt even Britain First are stupid enough to believe they have got this right. They know full well that the picture they posted is not the defacement of the Cenotaph. They are just hoping the fools who follow them will swallow their lies as usual, open their wallets and trot out the same old racism as always.