convicted fraudster Stephen Yaxley-Lennon billed his May 6 event as a #DayofFreedom. It was intentionally promoted as a day to fight for free speech and the right for people to express their views, no matter how unpalatable. The event organisers went to great lengths to ensure that their speakers appeared to represent a cross section of British society.

Robinson himself, he assured the audience at the start of day of freedom, had done very little to organise the event. The credit was due to his media team, notably Lucy Brown. So when Lucy Brown announced the speaker list included high profile You Tube activist Ali Dawah it would be reasonable to believe that she knew what she was talking about. As according to Robinson himself she had organised the event then it would also be reasonable to assume she was in charge of inviting anyone to speak who she wanted to.

Lucy Brown confirmed Ali Dawah in advance of May 6th. 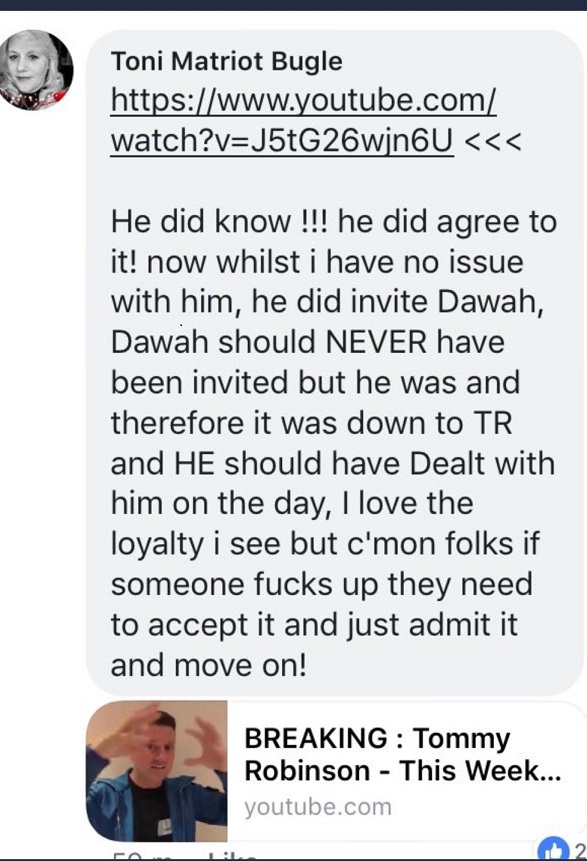 (She thinks Dawah should never have been asked to speak. She’s a full on Islamophobe and evidently yet another far right winger who doesn’t think free speech should apply to Muslims….)

Dawah was on the official running order.

Context: Ali Dawah's was invited to speak on the "freedom of speech 🤥" Day at 3:10 pm on May 6 2018. He was blocked and his team (3 people) were attacked by the group of 50-100 Tommy Robinson and DFLA members. My Theory is that it was a planned attack by the organizers. pic.twitter.com/K118pW5qyN

convicted fraudster Stephen Yaxley-Lennon himself confirmed that Ali Dawah would be speaking:

Dawah turned up to the event along with all the other speakers but was turned away from speaking. The trouble started when members of the FLA (Football Lads Alliance, though we call them Fascist Lads Alliance) decided to heckle Dawah and shout racist abuse at him. Dawah and Mohammed Hijab who attended the event with him were then both physically and verbally abused by the thugs of the FLA.

These are the men who attacked Mohammed hijab. Let’s bring them to justice, help @metpoliceuk find these men punching Mohammed. pic.twitter.com/mg78pJFWSW

Although organisers Caolan Robertson, Lucy Brown and several other speakers at the event (notably Sargon of Akkad and Count Dankula) spoke up for the importance of allowing Dawah the same opportunity of free speech that all the other booked speakers were given, convicted fraudster Stephen Yaxley-Lennon decided to pull the plug on Ali Dawah’s spot.

Then after the event Robinson denied he had ever given permission for Dawah to speak!

He then published a video on his Facebook page saying he would never have asked Ali Dawah to speak.

and then allegedly sacked Lucy Brown for inviting Dawah in the first place. (I say allegedly because although this is all over social media – 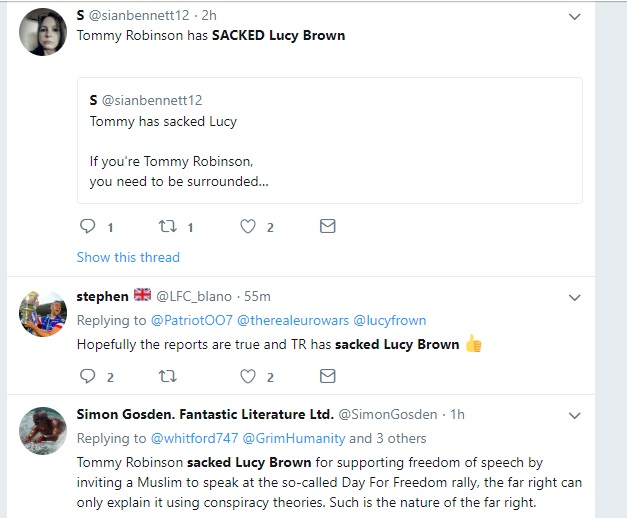 and reported on far right site Redpill Factory it hasn’t been directly confirmed by Robinson or Brown yet).

A source close to Robinson claims the sacking to be genuine though: 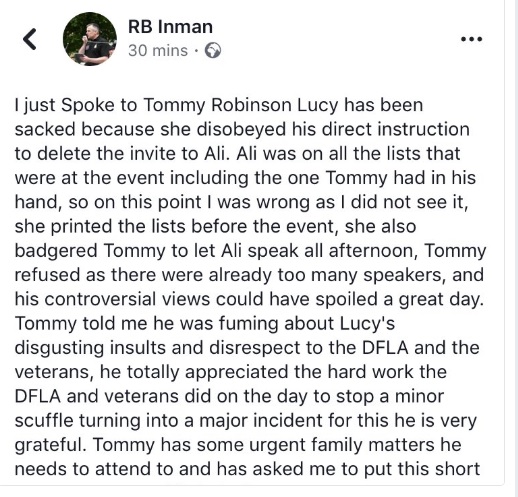 And now Tommy’s cronies are speculating Lucy Brown might be an Antifa mole. I tell you, you couldn’t make this up! 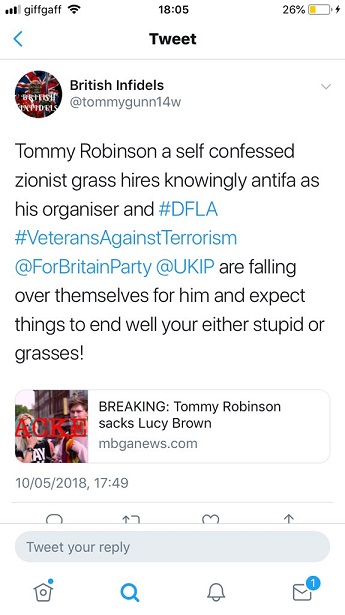 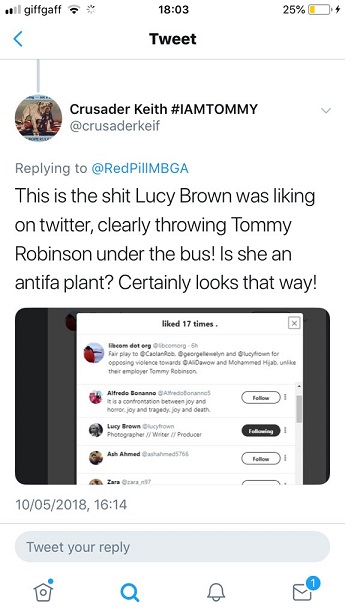 So the day of freedom has rather predictably descended into Tommy looking like a hypocritical prat and the usual fash infighting. We’ll keep you posted…

Leave a Reply to Just another small-brained female. Cancel reply