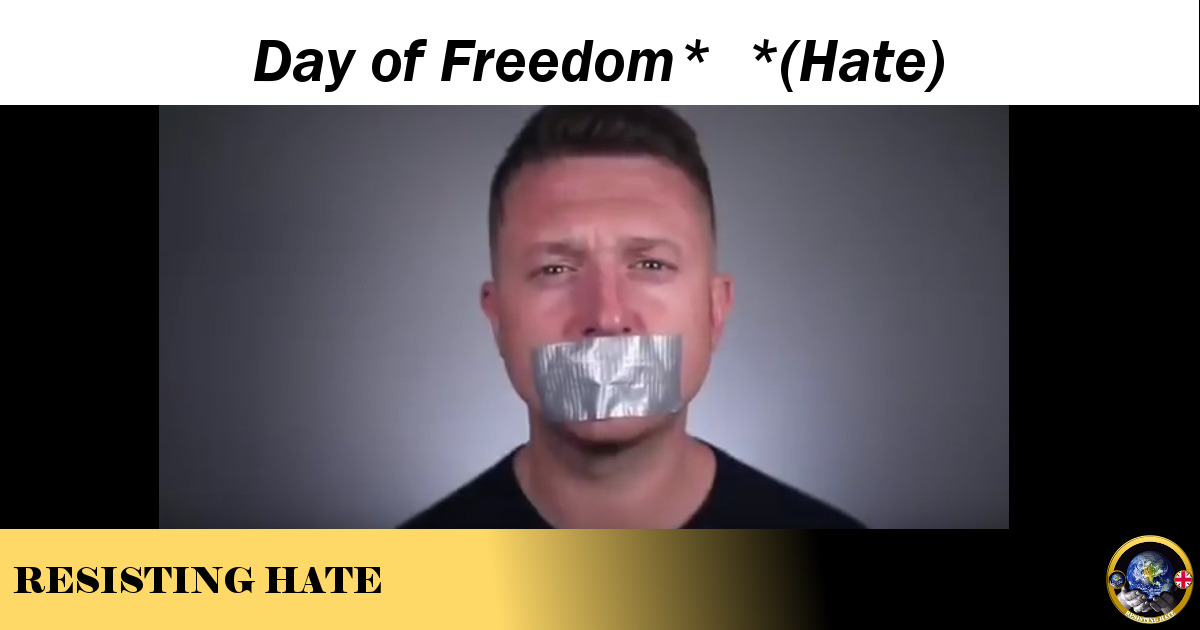 Today convicted fraudster Stephen Yaxley-Lennon and some of his far right friends took to the streets of Whitehall, London in an event billed as a #DayForFreedom. The catalyst for the event was the suspending of Robinson’s Twitter account from the social media platform (an incident that Resisting Hate had a bit of a hand in…). Originally the event was billed as a march to Twitter’s London head office but Tommy eventually twigged that on a Sunday before a Bank Holiday Monday there wouldn’t be many Twitter officials watching through the window so he changed it to a showcase of far right speakers instead.

We wrote about the people taking part in our article here but it is worth a moment to remember some of the people backing Robinson:

Lauren Southern – Banned from the UK for hate speech

When you're really confused. But you turn up to #dayoffreedom anyway. pic.twitter.com/O7PjNLdO8E

The Evening Standard (reporting on the scuffles that broke out during the event) referred to the crowds as in the ‘thousands’. It has been hard to get an accurate estimate on the number of attendees, particularly as the day was very well attended by Antifa and other organised antifascist groups. One of our Resisting Hate members believed the supporters of Robinson to be in the region of around 2000 but other reports have placed the crowds (both supporters and detractors) up to 50,000.

It is hard to understand what Robinson wanted to achieve. He’s a published author with a website, a massive FB following, contacts in the media industry and he is regularly interviewed on mainstream television. Just how much free speech does the man want? Was this ever about the right to speak freely or was it about the right to hate freely?

Tommy’s event may simply have been about nothing more than his ego and petulence. Breitbart published a piece today confirming that Tommy intends to sue Twitter for disallowing him use of their platform. This will be interesting as a private platform has every right to suspend who it wants. There is no entitlement to a Twitter account. Once again Tommy fails to understand the concept of the free speech he goes to such lengths to publicly defend.

I would also be interested to know where the funding for today came from. This was not an amateur attempt to draw a crowd, there was serious money involved in staging this event. Who is funding Robinson? Not Rebel Media, they parted company with him, not Jim Dowson, he’s got enough on his plate after the BBC programme last week. Not UKIP or For Britain as they don’t have a penny between them.

High profile events like this will get the far right noticed and, yes, will drum them up some followers but in raising their profiles like this the individuals involved also bring their behaviour and views to the scrutiny of a wider audience. Reading about Milo’s views on underage sex or Robinson beating up his wife will not gain their campaign the support they so badly want. This is the Catch 22, they need the publicity but the more publicity they get and the more high profile they become the more the public is exposed to the true face of these bigots and the hate that lies behind the rhetoric they spout.

Reading the hashtag on Twitter today there were more people criticising the demands to make hate speech free than there were people promoting it. This publicity may already have started to backfire.