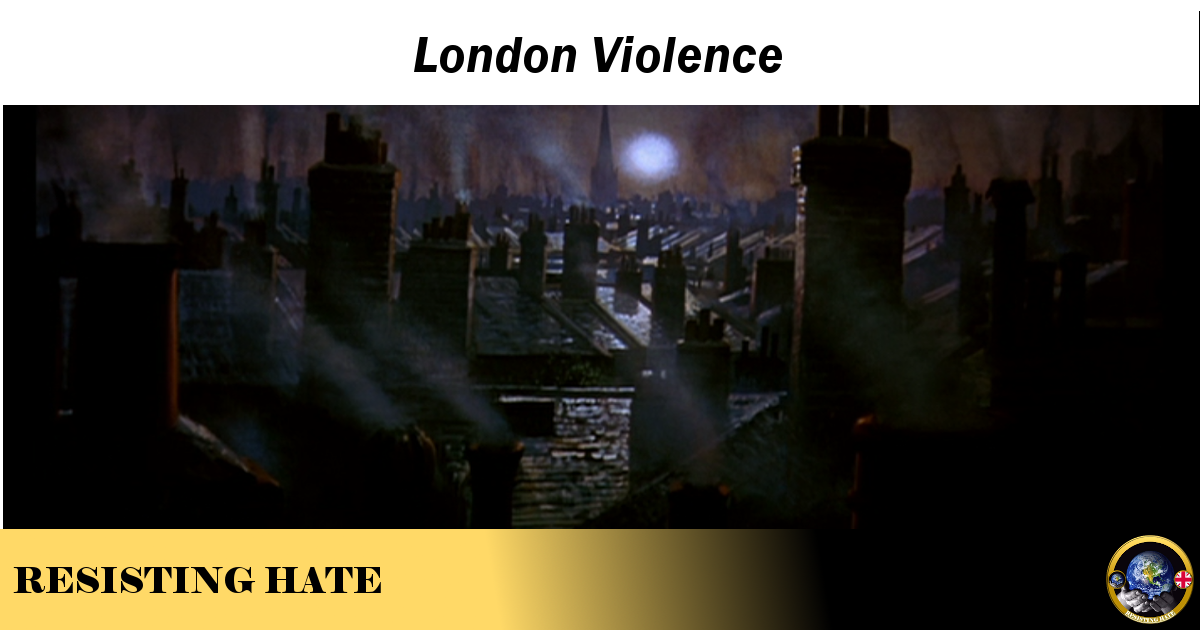 Violence in London has been an ongoing problem for several years; it’s nothing new in England’s capital. It has been happening for years, from the likes of the Kray Twins and the Richardsons to the three drug dealers who were killed in December 1997 in Rettendon, Essex. We have also seen notorious football violence during the heights of football hooliganism. Now, we have gangs killing each other in a so called ‘postcode war’ where innocent people are being wrongly killed. We have far-right groups launching ‘protests’ which are in fact an excuse to spread hatred and incite violence, and this usually is the outcome when they encounter counter-protestors. The counter-protestors do not instigate any hate or violence, they walk peacefully. But the far-right groups start shouting abuse and try to attack the peaceful protestors.

But let’s look at the history of London and where its violent history can be observed and spoken of. Much of this happened long before the Mayor Sadiq Khan came to office, which people seem to forget, but they think just because he’s a proud Muslim that they can pin the blame on him. This is wrong. Very wrong. They’re pinning the blame on him purely because he’s a Muslim. That’s the sole reason.

A spate of murders shocks the capital, occurring in the slums of Whitechapel. Five prostitutes (an act which a lot of women in poverty resorted to just to survive) were brutally murdered. The killer was of course Jack the Ripper. Nobody knows for sure who Jack the Ripper was; while there are many possible suspects, historians cannot agree on the identity of this killer. To this day, it’s a spate of murders that remain unsolved. Some say the crimes were solved and the killer caught, but there is no evidence to prove this.

The world is at war with Nazi Germany, a country held in the dictatorship of the fascist Third Reich leader Adolf Hitler, a man whose invasion of Poland was the catalyst that started the war. Conquering Europe, he launched an invasion of Russia which would ultimately fail. As we all know, this man was ruthlessly and mercilessly killing Jews to enact his vile ‘Final Solution’. This man who launched the attack on London, which we know as the Blitz in which England’s capital was bombed repeatedly. During these bombings many took to using the London Underground as an air raid shelter. Unfortunately, several people died during the Blitz.

The notorious Kray Twins, who are probably Britain’s most infamous gangsters, ruled their empire with a grip of iron and fear. They used violence, intimidation and even murder against anyone who dared cross them. The most famous examples are undoubtedly Jack McVitie, brutally stabbed to death and George Cornell, a rival gangster who was shot and killed by Ronnie Kray in a pub called the Blind Beggar in full and unashamed view of several witnesses.

Although these murders occurred in Essex, which sits just outside London, it’s still worth pointing out. If you don’t know what the Rettendon Murders are then it will be a surprise. It was the murder of drug dealers Pat Tate, Tony Tucker and Craig Wolfe. They used violence and fear to run their drug dealing business; Tate even brutally assaulted a pizza restaurant manager. They smuggled drugs from across the channel, eventually resulting in a botched supply of ecstasy which was 100% pure and resulted in a teenager’s death.

This one is actually an active crime organisation whose name I will not mention. But all I can say is that it’s clear they are a violent organisation that should not be crossed. I cannot give much information away for security reasons, only to protect myself, my family and those within Resisting Hate; but from what I’ve read it’s clear this crime organisation is one of the toughest I’ve heard of.

Notice the different periods in which these acts of violence occurred; very different periods of history which all produced violence of some kind or another. But why is Sadiq Khan still being blamed? We cannot blame him for the violence; if we could, then why don’t we start blaming the Mayors of those periods where violence occurred? It’s easy to pin the blame but pointing the finger at the wrong person – that’s just not cool.

When Boris Johnson was Mayor of London, all I saw on the news was stabbings and teenagers being killed by rival gangs. But, nobody was outraged at Boris for this despite the fact he was paying more attention to his bicycle schemes and having the police waste time and resources on finding his stolen bike. Still, no one was outraged at this. I remember when he was interacting with people, I asked about his plans to reduce the knife crime, he totally ignored the question. Which just shows that he didn’t even care. I’m not from London, but I was concerned about the violence that was occurring there. Boris chose to ignore such questions and instead answered meaningless ones.

But let’s look at another example of violence – football hooliganism, which Stephen Yaxley-Lennon was part of. London football firms going head to head and beating the daylights out of each other, the Northern football hooligan firms travelling down to London and fighting them. Where was the outrage? Grown men fighting each other like a gang of school kids who had a tiff in the classroom. It was and is pathetic, but where were the people blaming the Mayor for it? I don’t think there were any. If not, why? If people can blame Khan for the violence in London today, then why aren’t they blaming other Mayors?

London Riots – The period in August which started off when a black man was shot and killed by police. I’ve seen reports saying that he was holding a gun, I’ve seen reports that he wasn’t. I’m not saying which story is true and which isn’t, it would be wrong of me to say so, and would be disrespectful to the man’s memory and family. But his death resulted in riots across London, which subsequently resulted in arson, looting and members of the police being attacked. Guess who was the Mayor at that time? Boris Johnson. Now, where was the outrage at the London Riots during his time in office? Why wasn’t anyone blaming him for it? Why didn’t he do anything sooner to stop the riots from causing so much destruction? Why didn’t he introduce a curfew of some kind or ask then Prime Minister David Cameron to call the army in to help the police, as they were outnumbered at times? These were particularly dangerous riots which threatened to spread further across the country. But still, nobody was exactly outraged, just outraged at Cameron who didn’t exactly call short his holiday at the time, whist Nick Clegg did.

The fact of the matter is, Boris Johnson oversaw cuts to the police budget when David Cameron came to office. The public services budget was cut under David Cameron, a Conservative Prime Minister, which had to mean consequently that the Metropolitan Police had to cut its budget, which in turn has led to fewer police. And of course, there are only so many resources they can spare to stay within the reduced budget for the year.

This is what so many people are forgetting; this surge of violence is nothing new in London; and the rise is only down to the police not having a big enough budget to fight this influx of violence and bring those responsible to justice. Instead, we have a government that is more interested in cabinet reshuffles than the welfare and safety of the countries citizens and residents. We have a government that cares more about tax cuts for the elite than protecting us, a government that thinks cutting the police budget and NHS Budget is the answer to tackling crime and improving the health and welfare of the country.

London has seen violence, sometimes quite severely, for several years. Truth be told, it always will – and unless the police budget is increased by the Chancellor of the Exchequer, giving the London Mayor more funds to give the Metropolitan Police more resources, then the violence will not decrease. London has a dark, bloody and violent history, but nobody spoke up saying the Mayor brought the violence with them.

People are saying Mayor Sadiq Khan brought the violence as he’s a Muslim, and they’re using hatred and Islamophobia to abuse him. The likes of Tommy Robinson, Katie Hopkins, Anne Marie Waters and For Britain supporters are constantly blaming him. They won’t recognise the violence that occurred many years before Sadiq came to office, and when you try to mention it, they shout you down and throw abuse at you, showing that they hate the truth. They also certainly do not like being corrected. A lot of violence has occurred in London’s history it’s true, but the truth is that every town has violence in the present and a history of it as well, mine included. My town has seen violent murders, but are we blaming the Mayor for it? No, we aren’t. None of us are abusing the Mayor for the crimes happening in our town. We aren’t abusing their religion, we aren’t saying they brought the crime with them. As I said, the only reason people are blaming the London Mayor and abusing him is because he’s a Muslim.

But it’s also because he’s a Labour Politician.

But still, people are outraged at London’s Mayor for an increase in violence in the capital. But why don’t these very people search all towns and cities across the UK and pull out the statistics of the crimes in each city FOR ALL MAYORS?

For the ones with high crime rates, I’d like to see these very people attacking Sadiq Khan start questioning the Mayors of those towns or cities as to why their crime rate is so high. But the truth is, if the Mayor isn’t a Muslim, those people won’t care. They’ll say, ‘Oh he/she is doing a good job. The police are doing all they can.’ But when it comes to Muslim Mayors, these people are like, ‘They’re not doing enough. They’re not giving the police the money they need to reduce the crime rate. The Mayor is a Muslim, it’s their religion to be violent.’

That’s the problem with people now, they’ve ignored the history of London and are choosing to only see the violence because its Sadiq Khan. This is Islamophobic, morally wrong and victimising an innocent man.