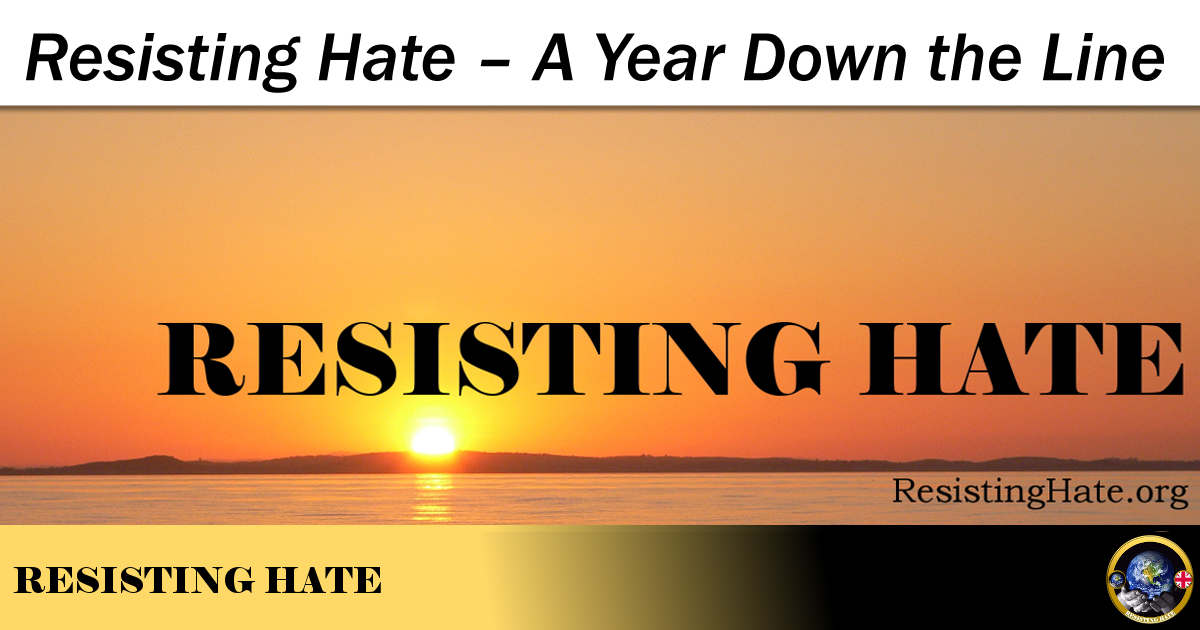 As most of our readers and supporters will know – Resisting Hate started out in 2016 as an online protest group in response to Islamophobic Twitter hate group Bluehand. We began as a parody organisation, intentionally copying the #Bluehand branding to cause confusion and to disrupt the online recruitment of haters to ‘James Bond’s’ clique of Islamophobes. And oh my word did we cause some chaos!

In November 2016, in the wake of the Brexit vote and the election of Donald Trump, the five founder members of, what was then termed ‘New Bluehand,’ decided to rebrand our organisation to oppose hate on a broader scale.  We had seen an increase in hate toward many different communities based on faith, colour, gender, orientation, race and health status and we wanted to use our group as a force for the good to combat these prejudices.

We built a Resisting Hate website (kudos to our tech guy who built and established all our rebranded technology in the space of 48 hours with no sleep) and we now have over 170 articles written by our members and guest writers which discuss and document many aspects of hate crime and its consequences. We also launched our ‘Good, Bad and Ugly’ gallery to highlight key figures in hate speech and hate crime on both sides of the Atlantic. Judging by the angry response we have had from the haters we have featured to date, it is safe to say our website is having an impact…

We launched a presence across several social media channels and have built up a strong following on Facebook, Twitter and Instagram in particular. Recently we added a Tumblr channel to our social media platforms.

We founded a second Facebook page (managed by our infamous founder Halal Kitty) called ‘Mock the Right’ which is set to top 20,000 followers by the end of the year. The reach across our combined social media pages is regularly in excess of 1 million people and we have built up a contacts network of likeminded groups and individuals who also help to share our positive anti hate messages.

In addition to the work we broadcast on our own channels, I was given the opportunity to publish our group articles on Huffington Post which has further helped bring the attention of the public to the necessity of standing up to hate.

We have grown as a group, welcoming new members, both nationally and internationally, on a weekly basis and building a support network for people already working as activists on their own. Our Twitter DM groups have increased, giving all our active members access to shared information and hate fighting techniques. Many of our new members have brought positive energy to the group and given us different ideas and tools to work with. I understand two of our younger members are establishing the RH name further in the gaming world. Watch this space!

We established an email reporting channel where we could send out key information about haters to enable our members to take action. This has been a very positive endeavour and Resisting Hate can be credited with removing numerous haters from social media platforms.  We expanded our website recently to add a Members section where we can update those who support us with the specific results and statistics to show the results we are getting as an organisation.

Resisting Hate had a presence at both the 2016 and the 2017 Annual Anti Hate awards and one of our founders had the honour of a nomination this year. Shaking hands with Nasser Kurdy was probably the highlight of the whole year for me.

We have also had the pleasure of working with other anti-hate organisations and have supplied key information on haters to both these organisations and to several UK police forces. Founder ‘Old Wolf’ in particular has some key projects on the go that may well result in some high profile arrests before the year is out.

High profile Halal Kitty has managed to acquire a bounty on his/her head (we always keep Kitty gender neutral for safety reasons – even most of our members are not sure if Kitty is male or female) – offered by Britain First after one of our many mole accounts leaked rather a lot of sensitive information about Golding, Fransen, Blunn and the rest of the motley crew at Britain First.

We have appeared on the radio – speaking on The Voice of Islam and Beat 103.6 and have also been interviewed by several academics involved in researching the subject of hate crime.

As we go forward into our next year I am expecting further hurdles. Our accounts are being mass reported by far right trolls, myself and our members regularly receive death threats, there has been talk of suing the group for libel… I fully expect us to lose various platforms at various times and I imagine the abuse against those of us who fight hate will only intensify. However we have achieved our key objective of organically growing an anti-hate organisation with no public or government funding and we have inspired hundreds of people to take a stand against hate.

There are two points I particularly want to make as a result of this. Firstly (obviously) we are always interested in expanding Resisting Hate and we welcome enquiries from interested parties. Please do contact us.

An avalanche is just snowflakes with team work

All it takes to make a difference in the world is to believe in yourself and to find others who share those beliefs. We are making a difference because we believed that we could and we gave it our all. If you agree with us that hate has no place in our society then now is the time to stand up and be counted. It may not be our group you join – there are hundreds of reputable organisations dealing with hate and the tragic consequences it leaves in its wake. Take your pick and fight for what you believe in.

Become part of the avalanche and let’s end hate for good.

One thought on “Resisting Hate – A Year Down the Line”