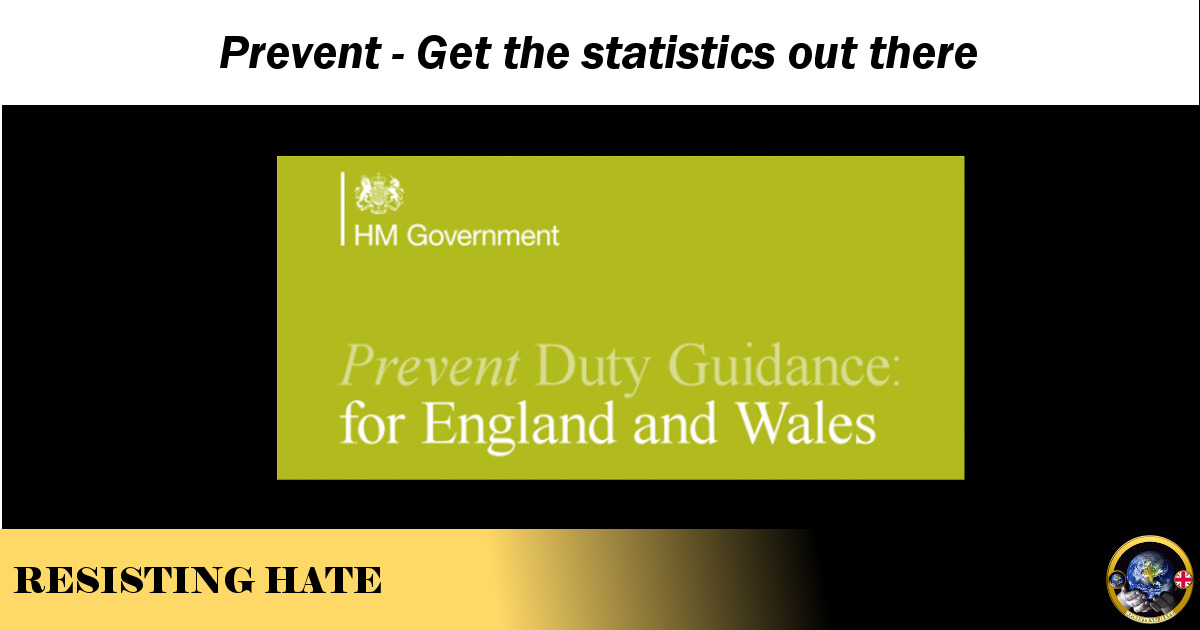 The government’s counter terrorism Prevent strategy has generated a good deal of controversy in the twelve years since it was first launched. Ostensibly a program that aims to target radicalisation and to help people unwittingly drawn into terrorism it has come under a lot of fire both from Muslims and Non Muslims for being focused too specifically on Islamic terrorism at the expense of the other threats faced by the British public.

A few weeks ago I attended a meeting at the City of London Police HQ where among the attendees in the room were two police officers involved with the Prevent program. Although the topic of the meeting was on a different subject, when we came to the free discussion part of the day the conversation, perhaps inevitably, turned to Prevent and several of us present at the meeting challenged the officers on that fundamental question – Is Prevent purely about Islamist radicalisation?

To their credit the officers certainly displayed no anti Islam bias. They talked with genuine passion about the importance of all cultural groups in the UK working together to defeat terrorism. They spoke about the importance of integration and how critical it is for the Prevent program to get all communities to buy into the strategy of supporting people at risk of being influenced by terrorist or extremist influences. They spoke at length about their view that Prevent should be perceived as a holistic counter terrorism program and not one aimed solely at targeting the Islamic community.

The senior officer present went on to talk about the figures for non Islamist referrals and these were impressive. 40 percent of referrals made by Prevent in 2016 were for far right radicalisation. This is an important step forward in tackling the rising challenge of the far right and also gives credence to the claim that Prevent is not a backdoor for legitimising Islamophobia.

However it does also raise the concern that these figures are not widely accessible to the general public. Or at the very least they are accessible but not positively promoted which amounts to much the same thing. In a meeting room of people, all of whom were connected with anti hate crime work those stats should not have come as a surprise to the majority of those present.

I challenged the senior officer on this. I asked him why, knowing Prevent faces the issues it does in terms of being accepted, the program had not made more of an effort to get these figures widely distributed. If they want communities to buy into Prevent then surely hard stats proving the program is being used to combat hate across the board is the best way to do this. No community wants to feel it is being victimised. If there is evidence to the contrary then this needs to be talked about. Some positive PR would work wonders for how Prevent is perceived, surely?

The senior officer explained Prevent had experienced difficulty in getting the newspapers to print their statistics on referral numbers and that this has been a concern for the program since launch. I challenged him on what other attempts the program had made to get their message out to the public and asked what other channels had been attempted to try and get the key numbers circulating. Unfortunately his focus (and by association the Prevent focus) was very much on the problem and not the solution. They had hit a brick wall but instead of attempting to climb it, the Prevent program appeared to have no idea how to navigate this blocker.

The bloke across the table from me (and I do wish I remembered his name. I’d certainly friend him on Twitter) had a much more proactive attitude to solving the problem. He suggested Prevent get their key statistics printed on leaflets and then distribute them to the UK Mosques. His logic was that it is the communities who the program is believed by many to unfairly target who need this information the most. He felt strongly that if UK Muslims were told 40% of Prevent referrals were nothing to do with Islam and were in fact targeting individuals of a right wing ideology that is often associated with Islamophobic crime then this would help present Prevent as a balanced counter terrorism initiative which would allay tensions between communities and improve the credibility of Prevent.

I strongly agreed with my friend across the table and added my own suggestion that the anti hate groups could be of some use here too. Any and all of us would be glad to publish the information if it meant getting the truth to people. Likewise the blogging community could be of some value as could independent journalistic publications.

I have to admit I was frustrated by the response.  It wasn’t that they didn’t see our point, I got the impression it was more an inability to look beyond the red tape. The established channel was to go to the newspapers and if that failed there was no back up plan. As is often the case with public service bureaucracy there was little imagination applied to solving the problem outside the formal structure of the status quo. And it is a real missed opportunity, all that effort put into tackling all forms of extremism but no effort at all to actually get out there and tell people what they are doing.

On the basis of the recent work to address extremism of all types I think Prevent may yet prove to be a program with some value. But it needs to get its act together and sort out its communication problems because until it does its stereotype of being anti Islam is not going away and the good it could do will always be stymied by a lack of confidence from the British public it was set up to serve.

One thought on “Prevent – Get The Statistics Out There”