This particular hater would, under usual circumstances, not have been considered for the Resisting Hate Rogues gallery as he is somewhat of a lonely fantasist as opposed to the hate activists we normally feature. However having given us the laugh of the decade with his recent video threatening members of our group (posted below, watch it now as it won’t be up long…) we thought we’d let him have a spot.

Jonathan Jennings of Swansea is well known to his local police Dyfed Powys.for his far right and anti social views and he has enjoyed the hospitality of police custody on several occasions.

Jennings promotes his hate views at every opportunity he gets including on his You Tube site (his video concerning the promotion of white genocide has recently been removed) on Twitter and on GAB.

These are a selection of the views he likes to express:

Jennings fancies himself as an “Edgelord” Unfortunately his bombastic delusions of grandeur are not well suited to a man who has achieved nothing edgier than posting pro Nazi views from the computer in his local college library (You really do need to do a better job of hiding that IP when you send us threats Jennings).

Pontifical Jennings (Allegedly known to his local police as The Purple Pimpernel) likes to ring up local radio talk shows to share his thoughts on topics of the day. We also like it when he does this as he is entirely oblivious that every person tuning in is laughing at him. He takes himself extremely seriously which results in a hilarious pomposity (although his YT videos are even funnier than the radio shows as they have the benefit of showing him in his trademark 1970s style purple shirt).

Have a laugh on us

Here is the video of Jennings making threats to our group. 6.25 is the timestamp where he really loses his cool. One can only imagine the frustrated and impotent nature of his rage as he filmed his funny little rant.

22.2.2017 Update on Jennings. This are tweets posted today. Will likely cost him his account but also gives a further insight into how extreme his hate views are: 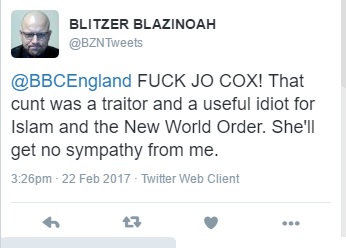 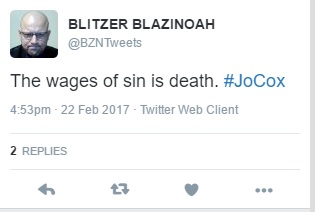