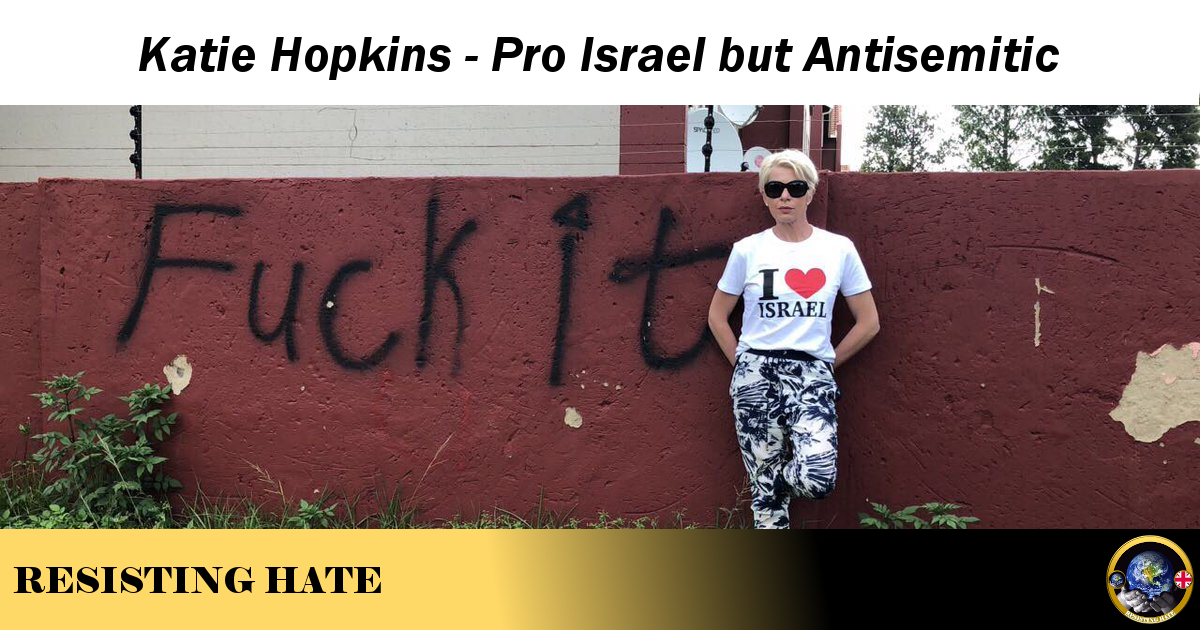 Hatey Katey is infamous for her dislike and derision of pretty much everyone. Muslims, fat people, the ginger haired, residents of Scotland… For years she has thrived on a diet of prejudice and bigotry. The one exception being her recent pro Israel stance and her determination to portray herself as a champion of the Jewish community.

One might almost believe Ms Hopkins had finally found a decent bone in her body and a laudable desire to genuinely support a community group. But a quick glance through the Resisting Hate archives (where we have helpfully saved the tweets that Katie thought it prudent to delete) reveals that her attitude toward Jews used to be as hateful as it is to the other communities she enjoys abusing on social media.

The screenshot below shows Katie making an offensive Holocaust reference about the wife of a Jewish politician.

Katie was exited from her LBC radio show in late 2017 after posting a tweet calling for a ‘final solution’ (another Holocaust reference) in the wake of the Manchester terrorist attack. Her leaving the company was celebrated by all those who worked with her.

In 2017 Katie hit the headlines for being photographed with known Holocaust denier Peter Sweden.

It was through Ezra Levant and Rebel Media that Hopkins was first introduced to the David Horowitz Freedom Centre. The organisation is responsible for funding some of the biggest Islamophobic names in the hate business, including Robert Spencer and Geert Wilders.

Horowitz has openly acknowledged that the funding from his organisation has played a part in raising the profile of several conservative politicians who have reached the White House, including Bannon, Miller, Vice President Pence, Jeff Sessions, Reince Priebus and Kellyanne Conway. The Freedom Centre establishes a link between pro Israel funding, far right journalists on both sides of the Atlantic, anti Islam extremists and the very heart of the American political system.

The picture below shows Hopkins with Robert Spencer of far right extremist website Jihad Watch. Spencer is on the payroll of the David Horowitz Freedom Centre.

And here she is pictured with Geert Wilders, the anti Islam Dutch politician with links to the far right German organisation Pegida. The David Horowitz Freedom Centre has contributed funds to Wilders’ anti Islam party ‘Party of Freedom’ (PVV).

The centre hosts an annual event every November called the ‘Restoration weekend’. It has recently played host to such dubious characters as Anne Marie Waters of racist political party ‘For Britain’ and discredited Islamophobic historian Daniel Pipes.

It was after coming back from the Restoration weekend that Katie changed her online rhetoric to a pro Israel stance, deleting her antisemitic tweets and openly portraying herself as a supporter of Israel.

One of the directors on the board of the David Horowitz Freedom Centre is far right funder Robert Shillman who helped pay the salary of known extremist Tommy Robinson when he worked for Rebel Media. Shillman is on the board of Friends of the Israel Defense Forces and The Jewish Foundation for the Righteous. Interestingly enough Hopkins is also a ‘Shillman Fellow’ and has received funding for her ‘journalism’ from him.

Katie couldn’t help a lapse back to her old antisemitic ways in 2018 in the wake of the Pittsburgh terrorist attack.

But very interesting to see that she very quickly retracted her tweet and apologised for it.

Given that Katie is perfectly happy to post things as vile as this (below) without apology it looks very much like the people who pay her to promote a pro Israel agenda asked her to delete her offensive tweet about Pittsburgh.

Despite her proclaimed support for Israel, many respectable Jewish organisations preferred to keep Hopkins at distance and wanted nothing to do with the extreme far right winger.

Even as she promotes her latest ‘documentary’ The Jewish Chronicle note that Hopkins has been recently seen at an event with Antisemitic speakers. Hopkins has not ditched her antisemitism, merely brushed it under the carpet to gain acceptance.

So in a nutshell, this is what I think. Hatey Katey is a known antisemite who after being fired from several mainstream media outlets sought employment with extremist independent media and agreed to publicly moderate her personal hate views about Jews in exchange for being funded to be openly abhorrent about Muslims. She’s paid to fuel division between the two communities and to create an Islam v Judaism schism in the media.

Adding credence to the theory is the fact that Hopkins is so ignorant of the State of Israel that she didn’t even know ‘Bibi’ is another name for Netanyahu and not a separate individual. It’s impossible to take her seriously as a genuine advocate of Israel when she makes basic factual errors like this.

Katie is doing what she’s always done, renting her loud mouth to the largest bidder. For Katie it’s not about Israel, it’s not about Jews, or Muslims, or Palestine or the conflict in the Middle East. It’s simply about the money.