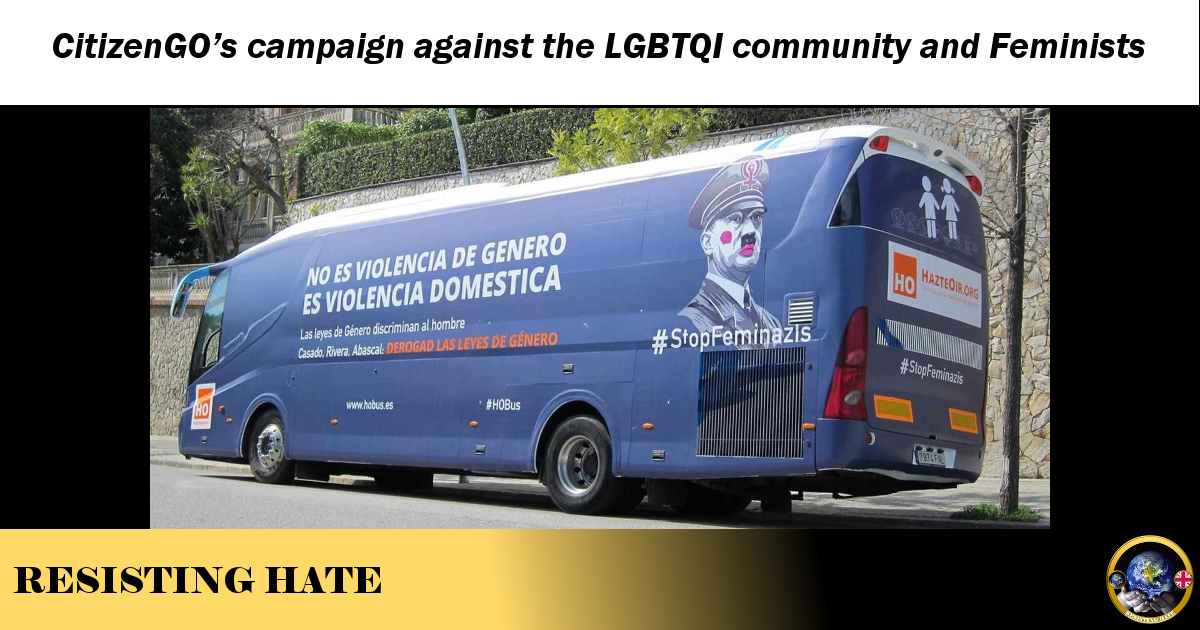 The use of a campaign bus or “battle bus” is nothing new, used by political party candidates, usually a party leader, as a centre of operations as they traverse the country making speeches and other engagements during general election campaigns.  It enables politicians to convey their message more directly to journalists, enabling journalists to get closer to the politician.  It also allows the politician to gain access the public; John Major, Prime Minister and Leader of the Conservative Party from 1990 to 1997, during his 1992 general election campaign famously adopted the old-fashioned practice of addressing the public from a “soap box” erected outside his campaign bus in an effort to converse directly with the public.

What if, however, the bus was used to promote hate and discrimination, travelling through a country to promote a far-right message, a “battle bus” of hate, a “hate bus”.

In 2017, CitizenGO made headlines when it launched a “hate bus” propaganda campaign against the transgender community.  The “hate bus”, or as CitizenGO would have it called, a “Free Speech Bus”, began in Madrid with bright orange bus plastered with the message:

“Boys have penises, girls have vulvas. Don’t let them fool you. If you’re born a man, you’re a man. If you’re a woman, you will continue to be so.”

It was CitizenGO’s response to a public awareness campaign run by the Basque advocacy group Chrysallis Eskual Herria, an association of families with transgender children.

The “hate bus” prompted high-profile protests and counter-protests.  A Madrid judge Jose Juan Escalonilla stated said the bus could not move until the slogans, including “if you are born a man, you are a man”, were removed.  With the judge stating the bus was an “act of contempt” meant to “injure” the dignity of people of a different sexual orientation. [1]

The “hate bus” was eventually forced off the road and banned in Barcelona, Madrid and Pamplona by city authorities.

CitizenGO and several other American conservative Christian organizations then sponsored a “hate bus” in the US, this time with the slogan:

Hopping from city to city to demonstrate against the notion that biological sex is different from gender identity.  Touring the East Coast, visiting Boston City Hall, where Democratic Mayor Marty Walsh, flanked by dozens of supporters, hoisted the transgender rights flag in opposition.

The bus continued New York, stopping at Times Square, Trump Tower and the Stonewall Inn, the site of the 1969 riots by members of the city’s gay community and the birth place of the LGBT movement.  LGBT advocacy groups turned out in protest, condemning it as the “hate bus”.  The following day, the bus parked in front of the United Nations headquarters where protesters vandalized the bus, spray painting it with graffiti reading “trans rights” and smashing its front window.

After spending a couple days being repaired, the bus travelled to New England, Connecticut, skipping a stop in New Haven, before heading south, with stops in New Haven, Philadelphia, and Baltimore, before completing its tour in Washington.

After controversial tours through both Spain and the United States, CitizenGO’s attentions were drawn towards Santiago, Chile; this time the “hate bus” bore the slogan:

“Nicolas has the right to both a mother and a father”

A clear reference to a 2014 campaign by Chile’s Movement for Homosexual Liberation (MOVILH) under the banner “Nicolas has two fathers”.  Understandably emotions ran high, with seven people being arrested during demonstrations that saw police use water cannon against protesters trying to halt the progress of the vehicle at the centre of the controversial campaign.

Despite vocal resistance to CitizenGO in Spain, the U.S. and Chile, the “hate bus” has been seen in cities all over the world.  In September 2017 it was spotted in Germany, in October 2017 it was in France, and in February 2018 a “hate bus” was seen in Italy.  With further reports of the “hate bus” being sighted in Mexico and Colombia.

In April 2018, CitizenGO Africa announced that Nairobi, Kenya would be the first city on the African continent to host its so-called “Free Speech Bus”, this in conjunction with the World Congress of Families’ regional gathering which was scheduled to take place on 15 May 2018.

The Southern Poverty Law Center describes the World Congress of Families as a United States coalition that promotes Christian far right values internationally, with the aim of restricting LGBTQI rights under the guise of the defence of the “natural family”, which they define as, heterosexual married couples with their biological children.

It seems that CitizenGO’s activities are not solely aimed at the LGBTQI community.  Hazte Oir, (Make Yourself Heard), a Spanish far-right association founded in 2001, and the parent group of CitizenGO, launched a bus campaign against feminism, calling women’s rights campaigners “feminazis” using an image of Adolf Hitler in makeup on the side of a “hate bus”.

With the same intentions as its 2017 campaign, another “hate bus” would travel through several Spanish cities, such as Barcelona, Valencia, Seville, Cadiz and Pamplona, until International Women’s Day, which was held on Friday the 8th of March 2019, where a women’s strike and demonstration was planned.

The “hate bus” included an image of Hitler, who was responsible for the mass-murder of six million Jews during the Second World War, wearing makeup and the symbol of feminism on his military cap.  The bus bore the slogan:

“It is not gender violence, it is domestic violence. Gender laws discriminate against men.” #StopFeminazis

CitizenGO also called upon on Spain’s conservative political leaders, Pablo Casado from the Popular Party (PP), Albert Rivera from Ciudadanos (Citizens) and Santiago Abascal from the far-right party Vox, to commit to repealing Spain’s gender violence laws for “violating equality”.  One of Vox’s intentions is to repeal the 2004 gender violence law and legal protections granted by Spanish regions to the LGBTQI community.

CitizenGO claims to have millions of supporters in more than 50 countries.  It is known for coordinating large-scale e-petitions that are anti-LGBTQI and anti-feminist, including petitions against transgender rights and abortion, and has been described as the right-wing counterpart to sites like MoveOn.org and Change.org.

CitizenGO is the international arm of Hazte Oir, a Spanish far-right association founded in 2001.  Hazte Oir was later diluted within CitizenGO, which was launched in Spain in 2010, by a Madrid based lawyer Ignacio Arsuaga, the founder and president of both Hazte Oir and CitizenGO.

The purpose Hazte Oir and CitizenGO is to carrying out campaigns to collect signatures through online petitions on issues mainly related to family and education, with the focus on Catholic and conservative points of view.

Ignacio Arsuaga is also reportedly the great-grandson of an artillery general who served the late dictator General Francisco Franco.

Ignacio Arsuaga, has also participated in sessions of the World Congress of Families a United States coalition that promotes Christian far right values internationally and has been criticised for allegedly unleashing “torrent of destructive anti-choice and anti-LGBT legislation, persecution and violence around the world”.

Santiago Abascal, the leader of the far-right party Vox, is a close friend Ignacio Arsuaga, with Abascal having close links with Hazte Oir.

It is also alleged that Hazte Oir has connections with El Yunque (The Anvil), a metaphor for an anvils ability to be unyielding when struck, a Mexican ultra-catholic far right sectarian organisation created in the early 1950’s as a reaction to anti-Catholic sentiment and the Institutional Revolutionary Party (Partido Revolucionario Institucional (PRI)), which had historically been in conflict with the Mexican Roman Catholic Church.

The Catholic conservatives of the Yunque compose part of a varied Mexican right that has grown, if not in numbers, certainly in strength to influence, over the past few decades, the Catholic Church and politics in Mexico. [9]

El Yunque’s influence in Spain began to grow following the death of Spanish nationalist dictator Francisco Franco, in an attempt to influence the vacuum left by the Spanish far-right.

One of the most prominent critics of El Yunque is Mexican political investigative journalist and author Alvaro Delgado.  In his book, El Yunque – La ultraderecha en el poder (El Yunque – The ultra-right in power) [8], which won the Mexican national prize for journalism in 2003, states that El Yunque was founded to “defend the Catholic religion and fight against the forces of Satan, even by force and murder”.  Alvaro Delgado also describes El Yunque as “ultra-Catholic, anti-communist, anti-Semitic, anti-liberal and with fascist features”.

According to Álvaro Delgado, El Yunque is directly linked to Hazte Oir and Vox, who see Spain as a country that it can influenced.

For Delgado, “the members of El Yunque see political parties as battering rams to achieve their objectives, and Vox responds to that profile.”  The Mexican researcher says that El Yunque “has financed similar associations, such as Hazte Oir.”  Delgado goes on to say, “I’m not saying that Abascal is a member of El Yunque, but I have no doubt that Ignacio Arsuaga is one of the leaders of El Yunque in Spain”.

Gender ideology is a right-wing invention

Campaigns of harassment and hate against the LGBTQI community is nothing new.  Though it’s often portrayed as an isolated element of the Christian right’s standard fare anti-LGBTQI agenda, the CitizenGO and Hazte Oir campaigns are actually part of a much larger, multi-faceted movement against what the right has dubbed “gender ideology.”

As Gillian Kane outlines in The Public Eye magazine, “gender ideology is a right-wing invention that intentionally misrepresents feminist, queer, and gender theory in order to justify discrimination against women and LGBTQI people.”

The phrase “gender ideology” is neither a legitimate academic term, nor a political movement.  It is a theory drummed up by hard-right religious activists, who present it as a gay- and feminist-led movement out to upend the traditional family and the natural order of society. It’s a catchall phrase to sell a false narrative and justify discrimination against women and LGBTQI people.

It is considered that free speech is constitutional and everyone has the right to hold opinions without interference, but language has consequences.  As Jessica Stern of OutRight Action International said in a press release sent to the Huffington Post.  “Trans youth already have an extremely high risk for violence, discrimination, and suicide.  Broadcasting a message that erases and denies the reality that transgender and intersex children and youth exist is irresponsible, factually misleading, disrespectful and dangerous.  This vehicle is part of the reason trans youth are driven to suicide.”

CitizenGO has a presence in the UK, with the name CitizenGO UK Ltd registered at Companies House on the 26th of January 2017, and occupies offices located in Cambridge.  CitizenGO UK Ltd’s current director is the president of the CitizenGO foundation, Ignacio Arsuaga; with Catholic journalist and commentator Caroline Farrow as Campaign Director for the UK & Ireland.

How long will it be before we see a “hate bus” in the cities of Britain, launching a campaign of hate to harass members of the gay and transgender community or intimidate women by calling them “Feminazis” ?

It’s not a matter of If, it is a matter of When until we see a “hate bus” travelling the roads of Britain.