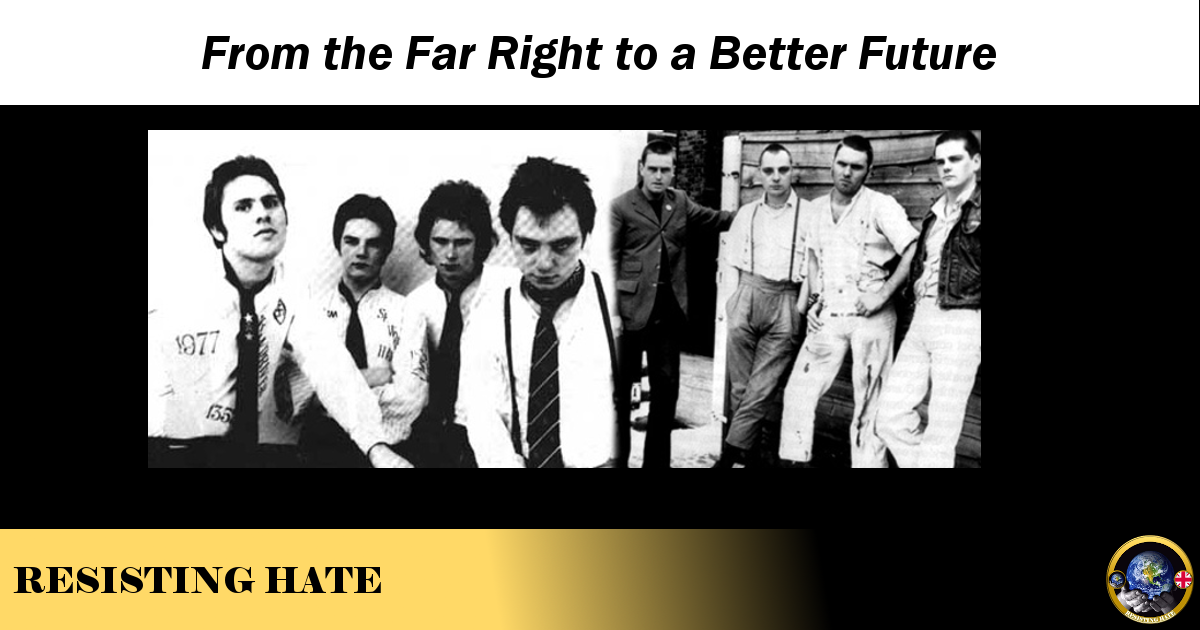 Thank you to our guest writer who has shared below his story of joining and leaving far right extremism.

I was born in the East End of London in 1970 in a working class family times are tough but we always had food on the table and my Dad worked extremely long hours to make ends meet.

Growing up until about the age of 14 I was never racist I listened to Trojan Reggae music and bands like The Specials, The Beat, The Selector and Madness. When I was 14 my dad lost his job his company was bought out by a Chinese farm and they laid all the workers off at the local factory. My dad was very angry and I heard him voice his opinions about foreigners taking over in our country.

When I was 15 I went to Lords cricket ground with a friend to watch England play the West Indies. When we left the ground and made our way to the underground I was attacked. I had a gold chain ripped off my neck and my designer tracksuit taken off me. I was beaten and left in pants and socks by an Afro-Caribbean gang and I was extremely angry as a result.

About a week later I was in London and saw some guy selling the National front newspaper. I went over to him and told him about the violence that had happened to me. They gave me a paper and some leaflets and told me I would look after me. I joined the National Front the following week.

A little while after joining the National Front I went to a Blood and Honour music concert to see the band Skrewdriver. That day Ian Stuart Donaldson became someone I looked up to. From that day on I got more and more involved and ended up becoming a full fledged neo-Nazi. I totally bought 100% into the message of hate. The next 15 years of my life was spent in one hate group or another.

The change in my life happened was when my wife was giving birth to my daughter, our first child She went into labour and I made my way to the hospital from work and all I could think of was I don’t want a non-white doctor to touch my newborn baby. My wife had a long and difficult labour and finally needed an emergency caesarean section. I watched and held my wife’s hand as a doctor from Pakistan and Afro-Caribbean nurse saved my daughter’s life. If it wasn’t for the skill of these two people my daughter would not be here today.

I came out of that room crying and the nurse came into the room and she hugged me and gave me compassion when I least deserved it. That event made me realise that everyone, no matter what race, religion or gender, has value and is important in the world. Only by working together rather than dividing society ca we make our world a better place.

From that day on all those years ago I’ve been fighting against the very hate I once believed in. I’ve given talks to schools and colleges in Canada. Getting away from the hate groups saved my life and it made me realise how brainwashed, angry and toxic I really was. It has made me see that the right wing is built on lies, fear and misinformation.  My views now are the polar opposite to what I once believed in. My views are very left-wing, I’m a Labour voter I have friends from all races religions, and sexual orientations, I have attended Friday prayers at a local mosque building bridges with the local Muslim community and while in Canada I marched on the Vancouver pride as a guest of P flag, the organisation that stands up for the rights of the gay community. I become very active in a group called ‘Inclusion Chilliwack’ where I lived who stand up against anti-LGBT fascists in the town.

What I would say to people out there is don’t judge people without getting to know them. Don’t listen to the lies of the far right, go out and meet people and make your own judgement. You will find you have a lot more in common with people from different races and religions than you actually think.

The only way forward is for everyone to come together to make the world a better place.