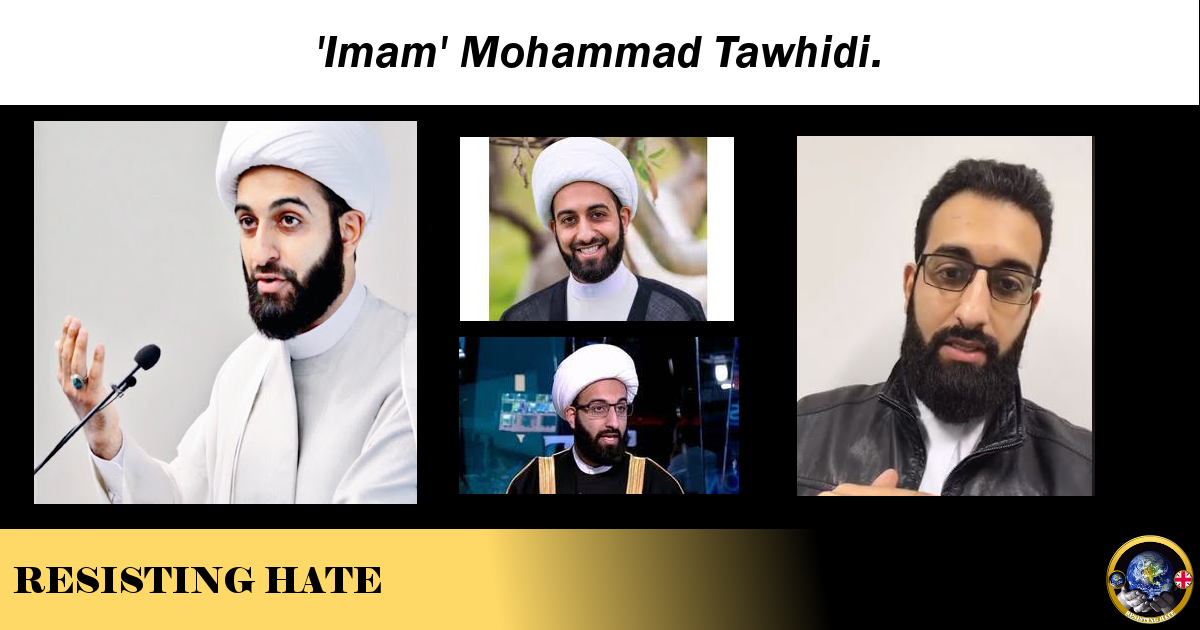 Written by Imad Rostami and republished with his kind permission.

Tawhidi is not a qualified scholar of Islamic theology.
His status was never recognized by the Australian National Imams Council or its South Australian equivalent.

Even extraordinarily liberal Muslims and “reformists” like Zuhdi Jasser have recognised that there are certain unavoidable issues associated with Tawhidi and his ilk that simply cannot be ignored.

An intense investigation by Bronwyn Adcock, a reporter for the Australian public broadcaster ABC, revealed that Tawhidi is beyond fringe, to the point of almost nothingness, with no credentials, no Mosque and essentially 0 followers.

Tawhidi has a very weird history of lying about his qualifications. His career began when he got a call from a reporter who googled “Imam Adelaide”, as he himself puts it here in an interview with Dave Rubin

Tawhidi went on the show, only to spread lies about risings among Muslims to set up a Caliphate in Australia.

Reporters pried further and found that he had lied about his degree from Qom, he ended up becoming a laughing stock in Australian media.

Chloe Patton, a researcher on Muslim understanding explains the appeal of Tawhidi here:

Other people thought the Imam was likely lying too.

On his website, Tawhidi posted this “doctrine of peace” in which he states that he believes the Prophet Muhammad’s government was a myth. Why does he believe this? We are given no clue, instead we are referred to his ‘forthcoming ‘book’.

Tawhidi went to give an interview to Australia’s Ben Fordham, which can be viewed here . In it, he claimed to have received a bachelor’s degree and master’s degree in Islamic theology from the Al-Mustafa University

In response Alumni of Australia published a letter saying that Tawhidi was initially referred to some courses to get a Bachelor’s degree, but was then placed on probation for his insufficient academic record, and finally dropped out on 3/27/2012 with “no educational progress” achieved.

He didn’t even receive a BA, let alone an MA or a doctorate.

Tawhidi published a confirmatory letter (regarding his qualifications) written by two other Imams working for RUSI, an Aussie investigative unit. But both men were good friends with Him, as seen by their social interactions –

(And had the same problems as he had with credentials…)

One other issue that some have pointed out, amongst both the Sunni and Shia communities, is Tawhidi’s usage of the term ‘Imam’.

Tawhidi is Shia, which makes it all the more awkward when you consider that there is only one Imam at a time in Shia theology, the head of the entire community, at least in a spiritual context. There can only be 12 imams according to certain sects of Shia Islam, with the final Imam being Imam Mahdi.
Some sects believe that the only Imam is Imam Mahdi and no one can call themselves an Imam until his arrival.

Going further, the title of Imam is a birthright to the Shia, descending from Ali (RA) and Fatima (RA) themselves. Tawhidi doesn’t even claim lineage and couldnt back it up even if he did.

Returning to the credentials issue, Tawhidi responded to the Al Mustafa University letter by releasing a video where he promises to respond to them personally soon.

(He never did. And even his friends in the RUSI never did.)

Something else Tawhidi has never been able to verify is his ridiculous claim that his publishers have asked him to reword or remove passages in his books for fear of Islamist reprisals.

Back in 2017, Tawhidi was attacked over a ridiculous GoFundMe for his “security”

He responded with a video where he claims to have left the Islamic Association of South Australia and will release their financial reports . He never did… Instead Tawhidi set up the Imam Tawhidi foundation, whose date of establishment and CRN are identical to the IASA. (Which means he didn’t leave them as promised, he just changed the name. ) Which impliesthat he won’t be releasing any reports after all

Tawhidi has made numerous incendiary comments about the Sahaba and Aisha RA on his older accounts, accounts he denies were run by him, but which rather obviously were.

The main account he used for these tweets was @BrotherTawhidi

The original account was deleted but the new one exists to archive those tweets.

Tawhidi complained that he had lost 3000 followers, then later tweeted that they had returned following his complaint.

Pretty much 24 hours after the original account was abandoned by whoever ran it, ImamOfPeace, the verified account currently run by Tawhidi, was set up.

The ‘BrotherTawhidi’ account was reactivated by the user who currently archives his tweets.

Among the very first people to interact with BrotherTawhidi, were users Dia_Hadddad and KhadimQanbar. They interacted with each other friends.

Another user who interacted with him was ShabirMukhtar. Unlike the others, ImamOfPeace and Shabir talked quite often.

The reason you don’t see BrotherTawhidi’s replies, is because when Tawhidi abandoned the account, he went to the trouble of deleting all the tweets to Shabir first.

ImamOfPeace liked a tweet by Shabir in which Shabir tweets a pic of BrotherTawhidi wishing to visit Syria. Shabir asks ImamOfPeace if he is still going to Syria.

Tawhidi released an official apology letter accepting that he was BrotherTawhidi and apologising for the horrible stuff he said when using the account. He posted it on his official facebook.

He later denied having posted this.

A user who claims to be close friend of Tawhidi posted the letter.

The user claimed to have obtained the letter from Tawhidi’s organisation the IASA but when contacted their statement read: “The Imam has not issued any statements prior to the establishment of this association. And his office only came to exist in 2017.”

This is false, Tawhidi was posting letters for years before hand, including the ones below in 2015.

Tawhidi has a history of running imitation and fake accounts.
Here, he uses a sock puppet accounts pretending to be “reformed” Muslims that believe his views –

(Tweet is deleted, but don’t worry, I archived it – see above)

Tawhidi once posted a video of a mob from Bangladesh, claiming it was supporters of the PTI party in Pakistan, A country that Tawhidu really hates. –

In reality, it was a Tabligh Jamaat clash over leadership roles.

Thus ends the thread, thank you for reading, May Allah bless you.

(And thank you from Resisting Hate to the author)

One thought on “‘Imam Mohammad Tawhidi.”