Guest blog from a lady making a welcome return to Twitter

I decided to come back on Twitter recently after taking a couple of years away. I came back on a few days after the Grenfell Tower Tragedy.

Correct me if I am wrong but there were humans in that tower, people like us. People who have a family and a life. Yet somehow due to this ignorance which has manifested itself in some people’s minds it has been deemed acceptable to mock and make disgraceful comments about the people who died in this tragedy.

What I found interesting is that – even when challenged – these bigots always revert to the “Oh they must have been subletting… they were scrounging off the benefit system… they were lying..”  All you have to do is have a casual look through hate preacher Katie Hopkins’ Twitter feed on anything to do with the Grenfell Tower and you can see evidence of the hate being openly displayed.

Talking of hate preachers, I have been blocked from Tommy Robinson’s feed since 2014, mainly because being as stubborn as I was back then – whenever he posted anything involving disgusting lies I would copy and paste the truth under every idiotic persons response ;).

Tommy Robinson (who apparently is not racist and who is trying to “help reform” Islam) claims he speaks the “truth”. But how exactly does Tommy speak this truth? I have known about this man way before he was the leader of EDL and part of BNP (people often forget his BNP links). The man is no better than any other hate preacher like “Abu Humza” etc. He does not “help” Muslims, he helps cause more issues between communities. He enjoys causing racial tensions and reporting on “facts” which in truth are generally just things he makes up.

I can assure you that if you check through any of Tommy’s followers at random you will find profile after profile of people tweeting disgraceful Islamophobic comments.

A few very recent examples are of when a young Asian girl was attacked with acid and Tommy quickly reported it was probably because she was too busy enjoying the western culture. The mind struggles at times to comprehend such idiocy but to see such a disgusting reaction actually made me so so furious. The girl could have been me. Yet somehow Tommy thinks it is acceptable to make that comment about an innocent girl. He didn’t even have the right facts – in the end it turned out it was a white male who was behind the racially motivated attack.

We cannot forget how much Tommy enjoys speaking about any sexual assaults by anyone who is an ethnic minority (mainly anyone who is a Muslim). Recently Tommy thought he would retweet the below: 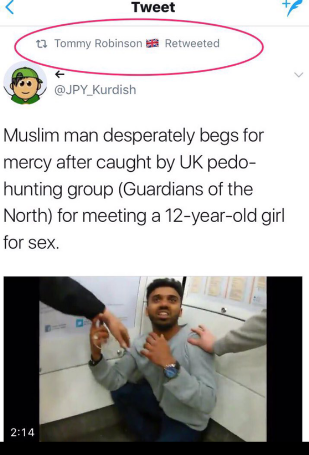 Who turned out wasn’t Muslim after all! Tommy quickly removed it but failed to comment on or apologise for his slander.

The final thing I want to address is a topic which I find very frustrating. Why do these far right people always seem to discuss/march/protest against any abuse committed by ethnic minorities but fail to mention any committed by white male perpetrators? We recently had the Rotherham grooming gang case which was not just upsetting but absolutely a massive failure by the police. These disgusting animals managed to get away with what they were doing for years. Yet we also have the case of Jersey House of Horrors? Year after year children were being abused continuously and yet nobody did anything!

My frustration is why do the far right fail to talk about this? Why do they not talk about the recent case in Austraila of the Senior Vatican George Pell who is facing multiple sex assault charges? Or the issue we have about the sexual abuse of cadets which have been covered up by officials?

In my Twitter words, a nonce is a nonce regardless of the race or religion. The question needs to be asked why we are not discussing all cases?

I will finish with this, I am a 29 years old, sometimes stubborn, independent Muslim chick. I do normal things like shop, eat and sleep. I do not get beaten by men, I probably have more rights then an average chick (mainly because I am the youngest and super spoilt :D) I do not need help from being “oppressed”, bacon will not harm me and I have a great life.

I do not need any fake “do gooders” pretending to help me and the rest of us out there by insulting and “protecting” us in the same breath.