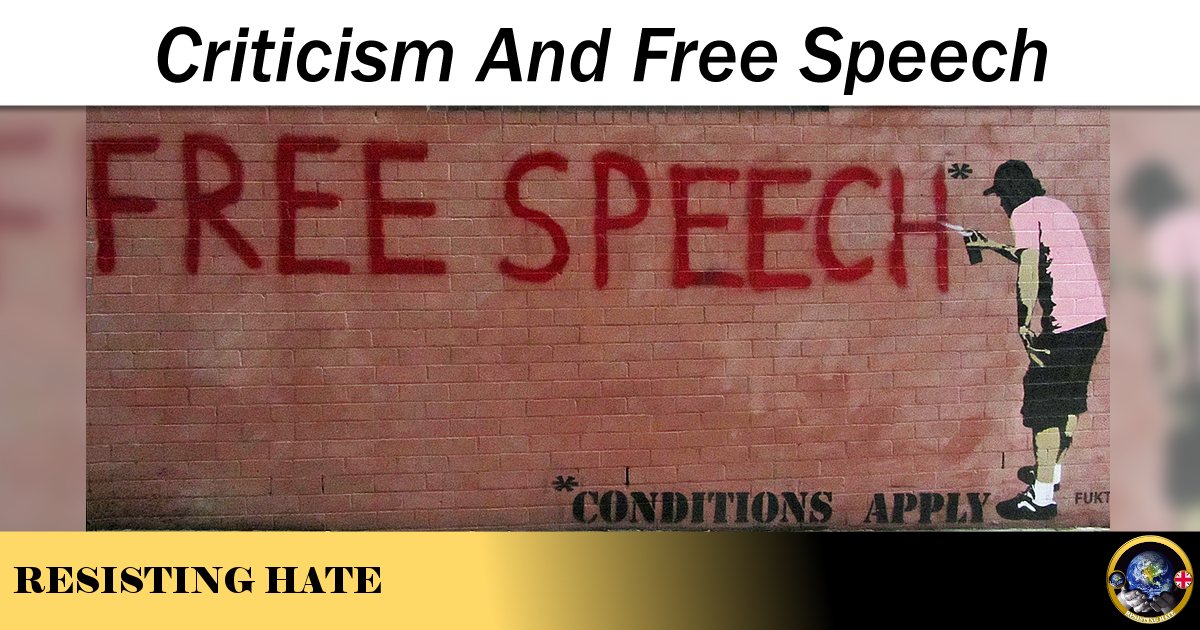 Our group Resisting Hate come under a lot of flak for the stand we take against hate speech. We regularly butt heads with defenders of free speech who feel we have a pro censorship agenda and who believe we want to silence the voices of those with differing views to us and to eliminate all criticism of minority groups.

The answer with which I usually respond when challenged is: Hate speech is not Free speech. But while this statement is certainly true it does not fully explain our position on criticism and the fact we actually believe it to play a valuable part in our society.

Criticism opens dialogue, it gets people thinking, it begins debates and discussions, it facilitates education and by doing this it helps overcome prejudice. The best way to challenge preconceptions about other religions is to get concerns out into the open and talk about them freely. Criticism is not a threat to religious beliefs, it is a tool that will lay the foundations for a deeper understanding of others and a more integrated society.

It is therefore entirely appropriate to hold an opinion on other religions and there is no reason why this opinion cannot be publicly expressed.

What you do not have the right to do is abuse other people when expressing your opinion.

You do not have the right to tell lies about other faiths or spread incorrect information that will skew the views of people encountering your untruths.

You do not have the right to deny historical facts and dates.

You do not have the right to extrapolate from the acts of the minority to make sweeping assumptions about the majority.

You do not have the right to make threats against individuals or community groups.

You do not have the right to desecrate the holy books and artefacts which have sacred meaning to others. This is not expressing criticism, this is expressing hate.

Nor does the right to free speech entail you have any right to be listened to or give you any right to a platform from which to share your views. The far right were up in arms recently when Katie Hopkins parted company with LBC as they perceived it as infringement of her right to free speech. But this was not censorship. Mrs Hopkins has the right to her views but she has no right to a radio show (or a newspaper column for that matter) from which to share those views.

It is important we do make a distinction between the right to free speech and the rights of others not to be abused, threatened or lied to. Constructive criticism and questioning play a positive role in our society. Hate does not.

7 thoughts on “Criticism And Free Speech”