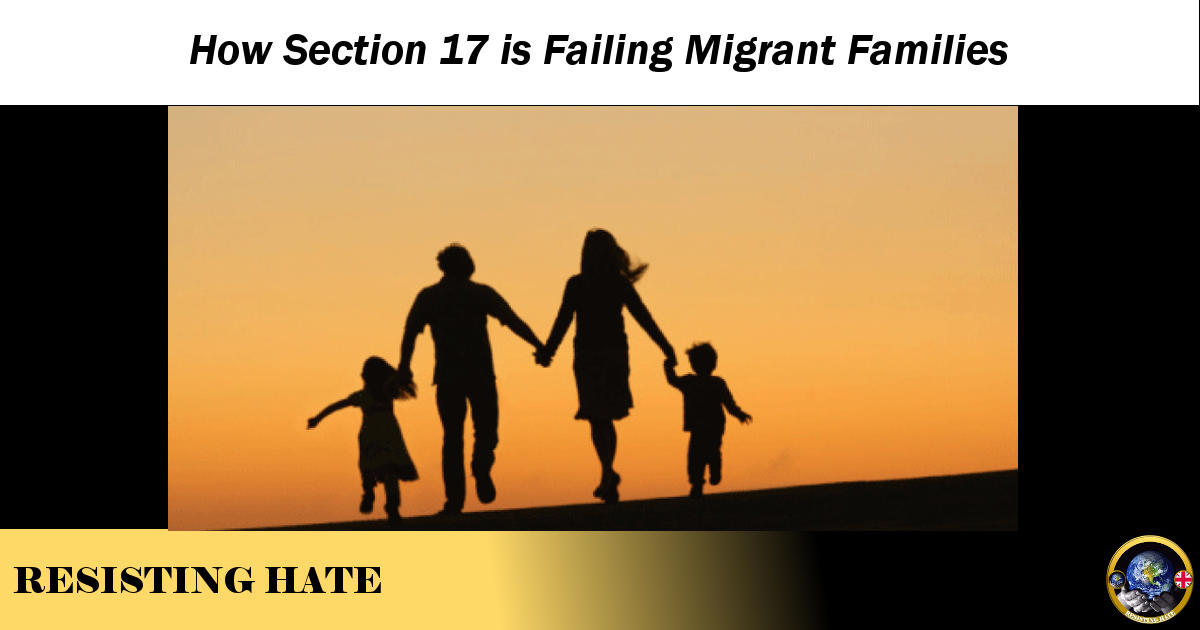 Living in one of the most developed countries in the world you would be forgiven for thinking that every family would be provided for. Sadly, this is far from accurate. Whilst poverty and homelessness hurts broad swathes of the UK’s population across a range of socio-economic groups, migrant families struggle disproportionately, and their children are no exception – even those with British citizenship suffer due to the immigration status of their parents.

Many migrants who enter the United Kingdom do so with the condition of ‘No Recourse to Public Funds’ (NRPF) imposed on them; meaning that they are prevented from accessing the majority of welfare benefits. Migrants are subject to NRPF when they are classified as a ‘Person Subject to Immigration Control’ (PSIC). This classification is applicable to migrants from outside the European Economic Area in several circumstances; for instance, they may have a condition of NRPF attached to their leave to remain, or they may not have leave to remain where it is necessary.

Support for those who have NRPF is minimal, but there is help available. In certain circumstances local authorities can be mandated to provide housing or financial support if it is to prevent destitution or homelessness. Although, this is only available to a select few; those with a disability or illness that necessitates care or aid, young people who have previously been the responsibility of a local authority, and families with a ‘child in need’.  Section 17 of the Children Act of 1989 requires local authorities to take responsibility for the wellbeing of children who are designated as ‘in need’. Local authorities are obliged to grant accommodation and financial support to the families of any children classed as such, regardless of whether they have NRPF. Children are said to be ‘in need’ if they are disabled or will not be able to sustain an adequate level of health and development without intervention. As a result of this, section 17 is often a bulwark against migrant families living in destitution.

Unfortunately, many migrant families still live in destitution despite this supposed lifeline. Whilst the word ‘destitution’ itself creates a powerful image that somewhat accurately portrays the circumstances these families find themselves in, it is important to make note of the official government definition. This regards someone as destitute ‘if they do not have and cannot obtain both (a) adequate accommodation, and (b) food and other essential items’. Migrants living in the UK with NRPF are often reliant on irregular and financially insufficient employment, and undocumented migrants are far and away the single most vulnerable people in the country when it comes to being subjected to forced labour, as in many instances they have no access to legal work. This means that they are left with few options but to rely on Section 17 to provide the basics for their families, so when it falls short it can be disastrous.

The reasons for this destitution are numerous, but the failure of Section 17 plays a prevalent role. Despite the protection that Section 17 is supposed to offer migrant families with NRPF, local authorities make it unreasonably – and often unlawfully – difficult to access. The Children’s Society describes how 60% of their clients have been illegally turned away from accessing Section 17 support on their first attempt, often being refused before an assessment has even been carried out. Migrant families are continually misled by local authorities as to whether they can access support through Section 17; some claim to only provide help to those with leave to remain, whilst others claim the exact opposite. Shockingly, some of The Children’s Society’s clients have even been threatened with having their children removed from them and entered in to care despite the absence of any concerns with regard to safeguarding.

Even when migrants have successfully worked their way through the stressful process of accessing Section 17 support, the provisions can be below par. In London, 64% of the housing provided to children under Section 17 was found to be inadequate in meeting the needs of the family. Almost half of the families that have found themselves in unsuitable accommodation provided by Section 17 have remained in it for over six months, which sadly is more than enough time to leave a lasting impact on a child’s life. The housing provided is often crowded and the living conditions can be unacceptable; reports of rats, cockroaches, and a lack of basic furniture and utilities are not uncommon. As well as this the accommodation provided is often miles away from where support was originally requested, meaning that not only are children torn from their schools and their friends, adults have the support networks they rely on stripped from them.

The financial support that is granted to migrants when they successfully claim under Section 17 is also frequently inadequate, as there is no legal guidance that mandates a base level of assistance. This is understandable on the surface as each child, and each family, will have differing needs which require assessment but without a mandatory minimum level of financial support, the amounts can vary not only from area to area but also within a local authority. Local authorities also seek to cut costs further by providing financial assistance solely for the children of a family through a cruel interpretation of the children ‘in need’ basis of Section 17. As a result, many families being supported through Section 17 rely on foodbanks, and some cannot even access those. Many struggle to provide school uniforms to their children or even get them to school due to a lack of financial assistance.

Local authorities are certainly not blameless and it is often their own implementation that causes the issues that have been reported, but cuts to local government through years of austerity – combined with rising housing costs – has put them under pressure to reduce costs. Section 17 can – and does – help to keep families out of destitution, but unfortunately this is not the norm and it is failing to carry out its purpose on a wide scale.

Jack Yates is a content writer for the Immigration Advice Service, an organisation of immigration solicitors.