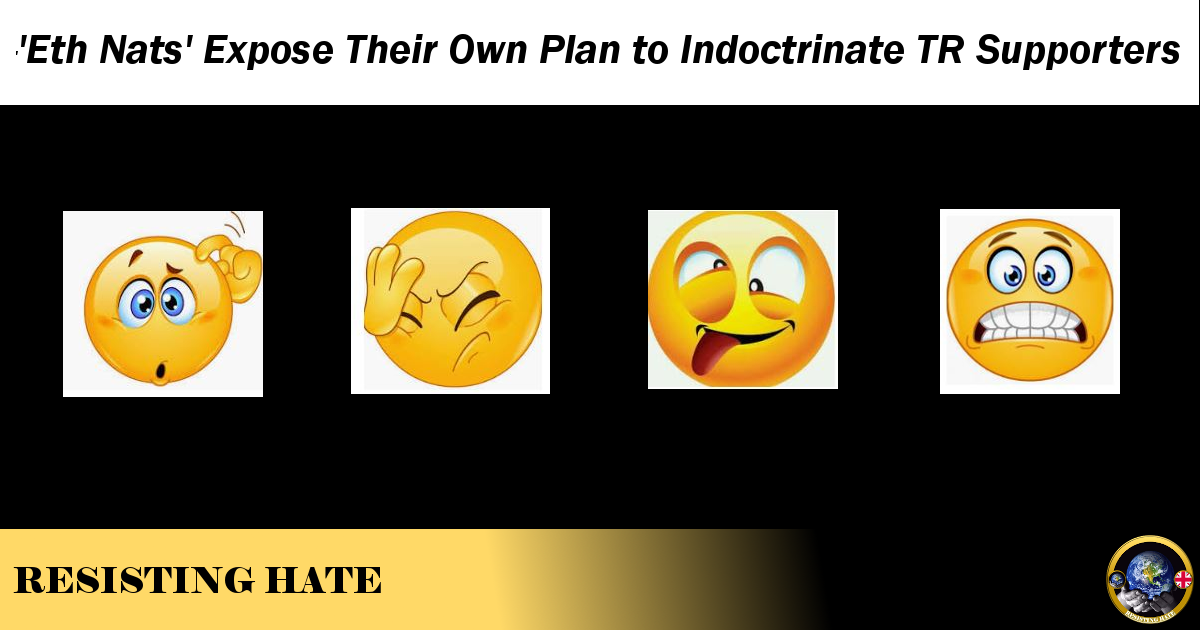 I have written before about the schism on the far right and the animosity between the two primary ideologies, Ethno Nationalism (Nazis) and Civic Nationalism (Robinson supporters). After observing some of the discussions first hand using my sock accounts in private Telegram chats on both sides, I decided to use my quarantine period to join a public Telegram chat open to all views and to force a public conversation on the Nazis plot to indoctrinate the Tommy Supporters into their far right views.

I expected to devote a few weeks to this. But it only took three days for the Nazis to blurt out publicly what they had been saying privately for weeks – that they see the Robinson supporters as gullible targets for brainwashing.

This is a voice note from one of the Nazi lot after they got a bit wound up in the chat room.

To clarify the ‘political’ positions in simple terms. Ethno Nationalists believe that to be English a person needs to be white. They advocate forced repatriation. They are also deeply antisemitic. Civic Nationalists (Robinson supporters) accept that PoC and other ethnicities can be English but argue for repression of specific communities, usually Muslims. They usually support the state of Israel but tend to be islamophobic.

The Nazi lot are led by Mark Collett. However Collett does not get his own hands dirty. He teaches his disposable extremist followers a few statistics and a basic level of rhetoric and sends them out to spread his message. Should Collett ever achieve the mainstream recognition he seeks (and trust me, he won’t) then he would drop the baying bigots bleating their version of ‘muh white England’ like hot potatoes.

And speaking of potatoes… The most vociferous individual on the subject of a 90-95% White Britain is an individual known as Charlie Big Potatoes. Charlie spends a good deal of his time in small Nazi chats telling other people how to indoctrinate others into Nazi views.

Charlie (real name Ronnie Burgess) is a particularly dense individual. Perfect cannon fodder for Collett. He’s ex EDL, ex National Action and currently living in Spain. Yep, our Charlie is such a patriot that he fled the country he professes to love in order to flee the law of that country. He values his views so much that he was too much of a coward to defend them in person. Some patriot!

Charlie fancies himself as a master of manipulation. Unfortunately he is unable to promote his views without being both patronising and insulting to the very people he is trying to motivate.

I am unable to show the screenshots of Charlie telling others how to dupe the Robinson followers. Unfortunately it would give the Nazis a heads up as to which account in their private chats is watching them. But I can tell you that the plan is to pick off the ‘weakest links’ first. The strategy is to engage the targets in public or ‘Tommy focused’ chats and then move all their Nazi accounts in until the chats are swamped with propaganda. Several of the public chats have become echo chambers for the extremists and they have a target list of the ones they plan to take over next.

Other tactics I have seen discussed include trying to cause friction between people in the hope that individuals can be ‘picked off’ (the old divide and conquer), presenting ‘Civ Nat’ as some kind of watered down ‘Eth Nat’ with the suggestion that it is a stepping stone on the path to “Full Patriotism” and publicly smearing the individuals perceived to be influential in the Robinson movement.

There are also plans to d0x leaders of the moderate/centrist right in the hope that once their details are public they will back off and leave their supporters vulnerable to be ‘plucked off’ one by one by the Nazi lot.

Interestingly, after I pointed out to the Nazis that calling the people they are trying to indoctrinate stupid might not be the cleverest way to win support they have now changed this tactic and started buttering up their targets. The blundering u turn in approach is very amusing to watch.

Charlie and the Nazis spend most of their time asking people to debate with them. They hope to use spurious arguments like: “Science can tell races apart so one must be better than another” or “Japan has an ethno state. You calling the Japanese racist?” to radicalise people to their Nazism.

One Nazi asked me the same question 13 times (yes I counted) in the hope that I would fall for their tactic of agreeing to discuss their psychobabble and manipulated statistics. I didn’t. There are three reasons I refuse to debate with Nazis. The first I explained to Charlie:

The second reason is the fact that debates with Nazis do not start from a logical position. They do not assume that all human lives are equal. It is like trying to debate if the grass is green with somebody who has no concept of the colour green. Futile and pointless.

Thirdly, to debate with someone is to consider that they have a view worth debating. Discussion with Nazis gives their views a legitimacy that they do not warrant. This is of course exactly what they want. The more airtime, the more credibility. Sadly there are many both on the left and the moderate right who fall for their incessant demands to ‘debate muh views’.

The people observing… A phrase that gives Mr Potatoes away. I can confirm that this particular chat was being watched by an audience much larger than those participating. And Charlie was well aware of it. He’s not speaking to the handful of people engaged in the chat, he is speaking to the audience. He is uninterested in the ‘honest debate’ he mentions here. He is interested in making sure that all the people sat watching the chat get exposed to his views and his hatred of non whites.

It’s a common tactic. Deny the real agenda. Make it as palatable as possible to appeal to a wide audience and then allow more and more extremism to be drip fed as people go deeper down the rabbit hole.

It will be intriguing to see what happens next. I am unsure how many of the Robinson followers will fall for all this and how many will see the manipulation for what it is. To an extent it is actually irrelevant as, even if they do manage to swell their numbers, the Nazis remain largely deplatformed in echo chambers kept well away from the mainstream.

But I think the penny is starting to drop…

The popular Telegram and Discord platforms (Oh yes I record On the Cobbles…) have such a fast turnover of content that both excellent and purile points are easily lost in the mire of Holocaust memes and general chit chat. This makes it hard to build a movement of ideas. Some of the extremists do have large volume Nazi channels on You Tube but I know for a fact that these are being targeted and mass reported not only by the left but by the moderate right wing too. Once these accounts go they do not just lose their audience, they lose their funding.

Only the other day The Iconoclast account made all his content private due to being on a last warning. It is only a matter of time until Mark Collett, Laura Towler and Unwashed go the same way.

I went into the neutral chat with a well reasoned and polite manner. I will illustrate the response I got from some of the Nazi accounts. I will remind you that these are people who believe they occupy a moral high ground (!) and who believe their views should be accepted by the majority. It goes without saying I need to do very little to discredit these people. They do it all by themselves…

One final point, I would like to thank the chat admin who permits me to stay in the Telegram chat. He is not a lefty, he does not share my world view or my opinions and I doubt he agrees with anything I say but he does have enough conviction in his own personal belief of free speech to listen not only to views he supports but to views he does not. I think that is admirable and I respect him for it.