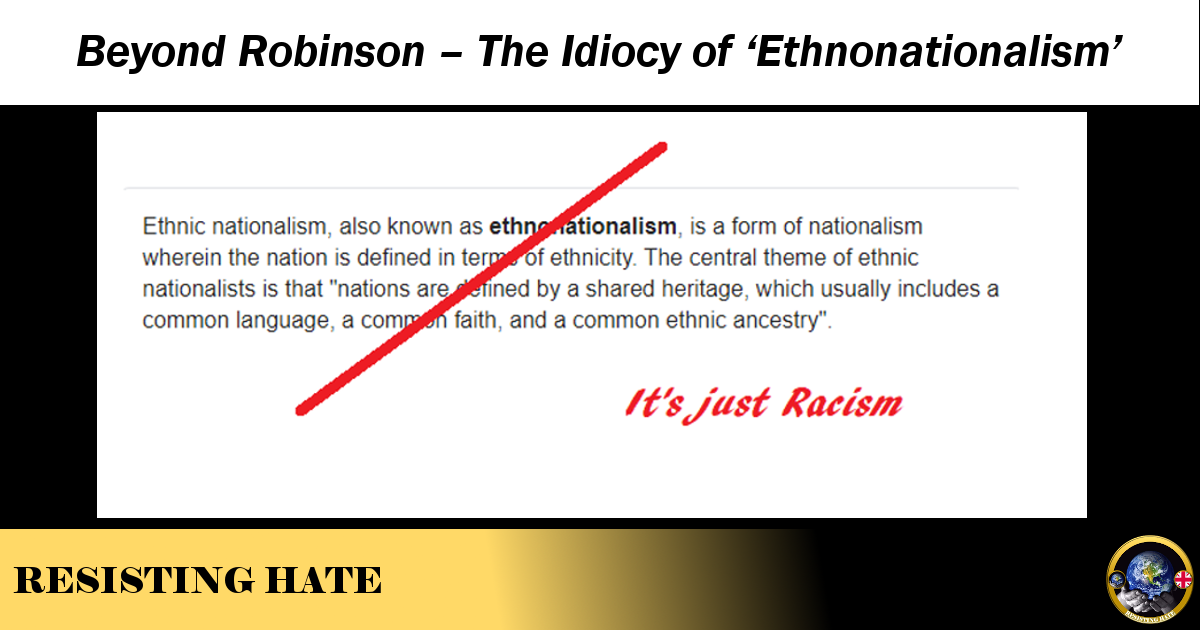 To those following the downward turn of the hapless Tommy Robinson’s fortunes it will come as no surprise that Resisting Hate are predicting 2020 will be the year that brings his status as the most high profile figure on the UK far right to a close.

Even before Robinson managed to get himself involved in a violent fray at the family friendly Center Parcs resort, 2020 was not going well for him. He’s looking at paying high costs in the courts where he is being sued for defamation by Jamal Hijazi after publicising material relating to an incident where Jamal was bullied at school. The last public comment from Robinson suggested he was confident as he’s been ‘talking to dinner ladies’ so not even his most vocal supporters are expecting a win on that one…

At the same time the defamation case against Jamal is going ahead, Tommy is also being sued by historian Mike Stuchbery. This relates to Robinson turning up at Mike’s house (twice) in the middle of the night and shouting abuse at him. Tommy was under the mistaken impression that Mike was involved in sending legal papers to his house (Mike wasn’t involved and RH can confirm that as we filmed the event).

Resisting Hate have successfully fund raised £10k for Mike’s legal case and are currently in the process of raising a further £10k as Mike’s wife also intends to pursue legal action against Tommy.

When these cases have concluded there are a further five individuals who plan to take Robinson to court. Currently we are unable to publish these names but some will be very familiar to our regular readers.

So it is a case of bye bye Mr Robinson. On the one hand a victory for Antifascism but sadly it also represents an opening to something even nastier and more sinister than even Tiny Tears himself.

The vultures are starting to circle around the remaining Tommy supporters and this will be a theme for several future articles as we start to investigate and expose the people involved. There is an orchestrated and organised attempt to pick off the vulnerable, the gullible and the violent Robinson supporters and to move them toward a more extreme rhetoric.

The primary group involved with recruiting the violent supporters is Proud Boys Britannia (remember that part of the induction process for becoming a Proud Boy is being arrested for violence). They are actively sending their members undercover into Tommy chats to identify who would be most open to street violence. Once identified these individuals are groomed and moved to private Telegram groups where they are indoctrinated further into the misguided belief that by being violent thugs they are benefitting their race or country.

The gullible and vulnerable supporters are being picked off by ‘ethnonationalists’ (essentially a sanitised term for modern Nazism). The ethnonationalists identify the Robinson supporters who oppose Islam and take them through a radicalisation process of brainwashing them into hating Jews with the ultimate goal of encouraging them to support an ‘ethnostate’. Basically it’s “England for Whites” rubbish. But who better to fall for it than the people who have been lining Tommy’s pockets for years in his ‘fight against Islam’?

Nature abhors a vacuum and the downfall of Tommy Robinson will leave a void that will see many of the peripheral far right figures clamoring to be the new number one. A lucrative position indeed as extremist far right politics are all about grifting. The real fight is for who can sweep up the most ex Tommy followers and con them into giving all their money away.

This slow shifting of the far right to the extreme right became publicly evident when the admin of the largest pro Tommy chat on Telegram became involved with known Nazi Mark Collett and began to use the TR Talk channel to promote Collett’s antisemitic videos. This was a coup for the ethnonationalists as it gave them a captive audience of 3-4 thousand active racists to whom they could expose their Nazi views. They needed these numbers as Mark Collett is hoping to register his ethnonationalist group ‘Patriotic Alternative’ as a political party.

This is the type of post being published now in Patriotic TR Talk:

Both the right and the left are contacting the Electoral Commission to register opposition to allowing a Nazi to enter politics. So Collett’s chances of following his mentor Nick Griffin into the political arena are looking very doubtful. (You are welcome to send screenshots exposing ‘Patriotic Alternative’ to resistinghate@gmail.com and we will forward to the Commission for you).

Other far right individuals like Vinnie Sullivan and James Goddard have also changed the way they interact with their groups and the messages they put out. Tommy Robinson opened the door to being racist but his successors have become openly racist and proud of it.

These are examples of the content being posted in Sullivan and Goddard’s chat rooms:

Other right wing groups and individuals have also shifted their bigoted attitudes further into Antisemitism and racism. Ashlea Simon of Britain First is a member of many of the extreme and Neo Nazi Telegram chats. Antifa Public Watch members seem to think making jokes about Hitler are funny and earlier in 2019 we saw Tommy’s close associate Lucy Brown go on a camping trip with Mark Collett.

The demand from the extreme right wing for Robinson and his followers to hate Jews in the same way as they hate Muslims has grown to the extent when Robinson had to directly address it. In the video below he argues with Nazi ‘Charlie Big Potatoes’ (an anonymous Nazi internet coward) as racist v racist squabble about who to direct the most hate toward.

To be clear this shift from Islamophobia to Antisemitism and Racism is not an evolution of views. This is a deliberate and well managed campaign from racist extremists to grow a Neo Nazi movement from the embers of the Tommy Robinson movement.

Robinson may be on his way out but the fight against hate goes on.

One thought on “Beyond Robinson – The Idiocy of ‘Ethnonationalism’”