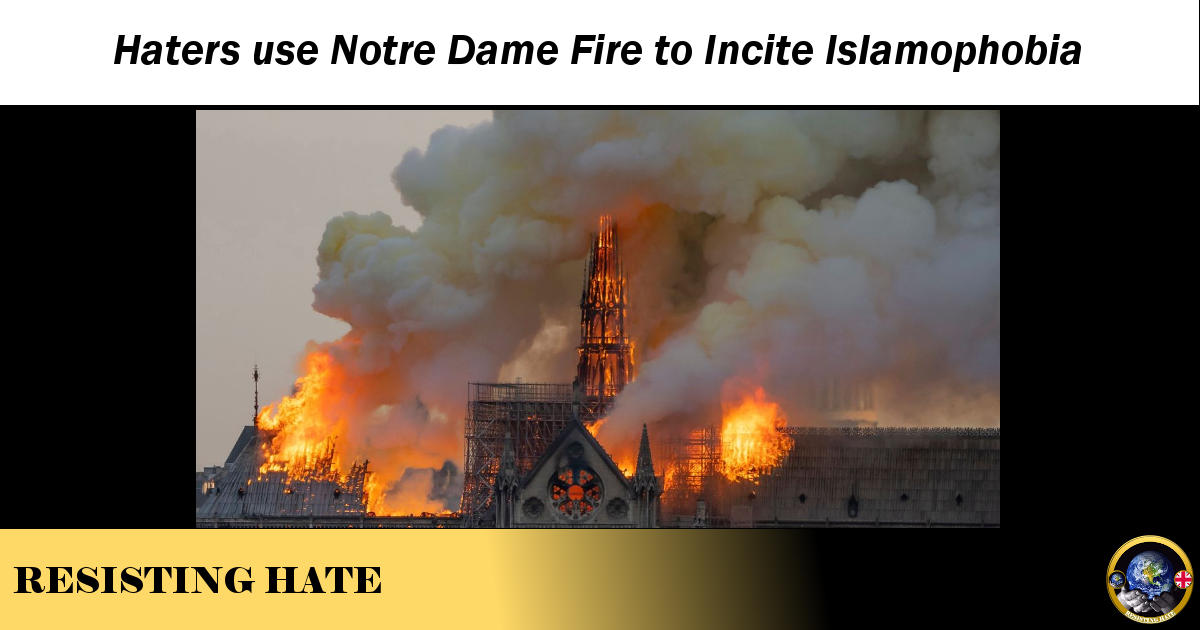 Yesterday the iconic building Notre Dame Cathedral in Paris caught fire. After several hours of heroic fire fighting the fire was finally put out and the damage assessed. The spire had been entirely wrecked, along with most of the roof. with the dawn showing millions of pounds worth of damage to the famous landmark . It was a tragic moment for worshippers at the holy building and a saddening time for anyone who values history and architecture.

However, among the genuine mourners on social media there was a vociferous minority who saw an opportunity to turn tragedy to their advantage. Within minutes of the breaking news that Notre Dame was on fire, haters had taken to Twitter, Facebook and Instagram with their predicable lie of: “It was the Muslims wot dun it.”

The claim that anyone had ‘done it’ was surprising in itself as there was no suggestion that the fire was an act of arson or terrorism. All the early reports suggested the fire was an accident, likely as a result of the renovation works in progress at the Cathedral and which have been ongoing for several months.

Although the French authorities, quite rightly, intend to conduct an extensive and comprehensive investigation into the cause of the fire there was (and is) to cause to suspect that the fire was started intentionally. There is certainly no grounds to suspect that the fire was started deliberately by an individual or community group. Yet within minutes of the blaze taking hold, individuals were speculating, and in some cases even claiming to have evidence, that the fire had been started by Muslims with the intention of destroying an important Christian building during Holy Week.

The lies and misinformation spread through social media quicker than the fire spread across the roof of Notre Dame. Aided by high profile bigots like Katie Hopkins and Paul Watson (who incidentally was exposed by Buzzfeed for his nonsense) the rumours went viral across key platforms. Twitter in particular being a source of concern as Twitter is a platform that many rely on to get up to date news.

The screenshots below were all taken within the first couple of hours of the news of Notre Dame breaking. They are presented in no particular order . They have not been altered or photoshopped. I am presenting these screenshots to illustrate how social media can be used to spread hate and lies. They also expose the agenda of the far right and their dishonesty in exploiting any headline news to further their cause of hatred, Islamophobia and bigotry.

5 thoughts on “Haters use Notre Dame Fire to Incite Islamophobia”