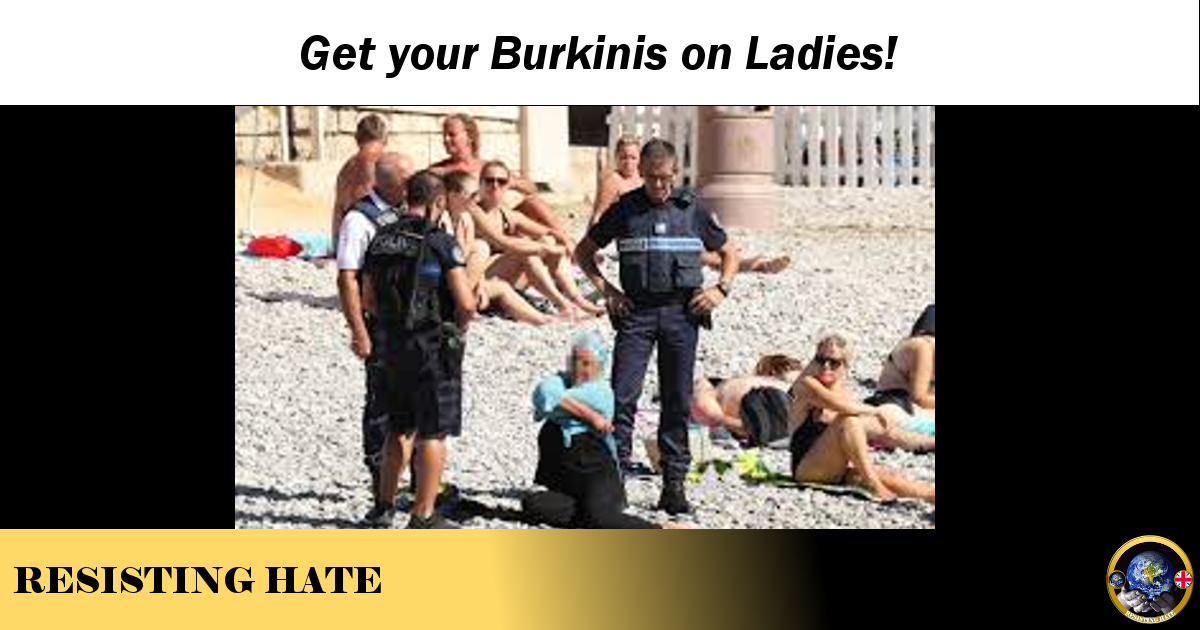 For any individual who hasn’t spent the last week and a half holidaying in a cave, the issue of France and the burkini ban will have turned up at some point in their newspaper or social media feed. The headline image of four armed French policemen forcing a Muslim lady to remove layers of clothing has raised eyebrows and debates all over the world.

After a fraught few days of controversy the French state council has finally ruled that mayors of individual regions do not have the authority to restrict civil liberties without justifiable cause.

It is surprising that mayors in these coastal French towns ever thought they did have the authority to impose such a dictatorial ban. It was an edict with obvious connotations of religious discrimination and far reaching consequences that went beyond the victimisation of the French Muslim communities to encroach on the rights of the female gender as a whole.

Essentially regions of France were saying that it is the job of the state to police what women choose to wear. It is interesting to notice that no such directives were issued on male dress. It is also ironic in that while attempting to “prevent repression of women” the French were doing precisely that and taking away the choices and freedom of women. This is blatant sexism.

As a garment in itself the burkini is pretty innocuous. It is best described as a slightly more stylised wet suit – or swim wear with a greater body coverage than more conventional swim suits. It is precisely this modesty that seemed to raise the blood pressure of the French mayors. Women in their eyes should evidently be uncovering more of their bodies on the beach. This begs the question whether French mayors see women as individuals and decision makers in their own right or whether they seek to objectify them as commodities for sexual gratification.
The rationale for the ban seemed to boil down to two key points:

If the burkini ban is to be justified by the concept of enforced secularism then I would strongly question why only the chosen dress of Muslim ladies was being held to account. Surely Christian crosses, Sikh turbans and Jewish Stars of David are equally prominent symbols of a chosen faith? By targeting one faith community and one faith community alone the French were being deliberately discriminatory and divisive. The intention was obvious, they wished to persecute Muslims.

The French attempted to justify the bias toward banning the burkini by making oblique references to terrorism. To the best extent of my knowledge (and I run an anti hate group, I do a fair bit of reading in this area) not one single act of terrorism has been committed by an individual wearing a burkini. Very few acts of terrorism have been carried out by females. It is tenuous in the extreme to try and link a lady’s swimming costume to a terrorist agenda.

The claim that banning the burkini will reduce social tension is equally laughable. Divide a community and you get a divided community. The ban reinforced the dangerous misconception that the Muslim in the street is associated with hate groups like ISIS. This increases social tension between Muslims and non Muslims and does nothing to promote the value of integration between different faith communities. Divisive tactics like this create a climate of fear and mistrust and actually worsen the social tensions that the ban was (supposedly) meant to reduce.

As to why the ban was put into force in the first place I would suggest that it was a poorly executed spin attempt to assure the public that steps are being taken against terrorism. It is far easier (and more enjoyable) for the French police to stroll the beaches asking ladies to remove their clothing than it is to actually get on with the more challenging job of tackling extremist terrorist groups. This was a sop to the public and an insult to those who expect the law to be using its full resources toward promoting the safety of the public.

The ban, in my opinion at least, was also intended to mobilise the far right voters. It was obvious that such targeted discrimination would achieve mass publicity and that this very public furore could then be used to promote the far right agenda of individual politicians. Only days after #burkinigate broke Nicolas Sarkozy went on record saying that if elected he would support a national ban of the burkini across France (he has actually gone even further since and stated he would also ban the hijab from French universities).

The results of the ban, had France not finally come to its senses, could have been extremely far reaching. The growing civil unrest aside, it would have had local implications for families with some mothers unable to visit the beach to supervise their children, safety and security issues on the beaches and an emerging generation of children confused and upset about why their mothers are being treated differently to others.
Once a legal system is allowed to legislate this kind of petty prohibition it sets a precedent for removing even more human rights. It is only a short step from “You must not wear” to “You must wear,” and before we know it we are back in Nazi Germany. This may have started as a Muslim lady issue but it did not end as one. Every single human being, regardless of gender, race or religion has a personal vested interest in standing up to bureaucrats who want to destroy the rights of the people.

Because if you let them take somebody else’s rights away, you can bet your bottom dollar they will come for yours next.