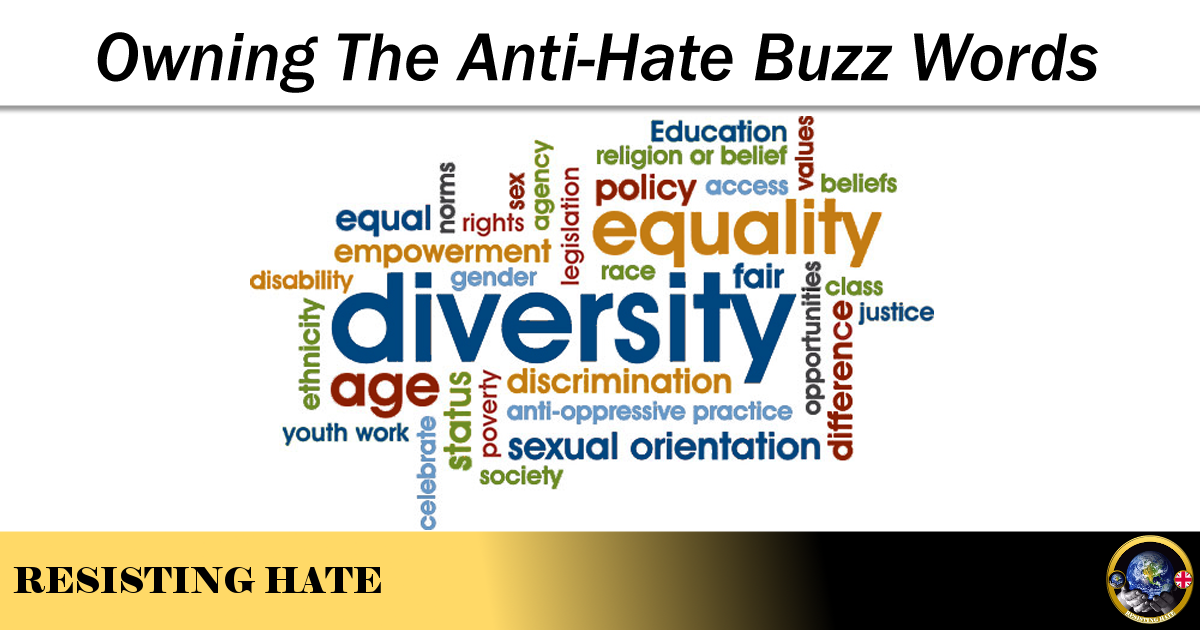 My mobile phone has now got to the stage where if I type the letter d it comes up with the auto suggestion that I want to use the word diversity. Such is perhaps the eventual lexical fate of anyone involved in an anti-hate group. However, although I am gratified my Android device is so culturally aware, this has a deeper implication, namely to highlight the very limited vocabulary associated with anti-hate speech.

The big three words are Diversity, Multiculturalism and Integration. If you ever look at the word cloud of an anti-fascist on Twitter you will see these words crop up again and again. The concern I have is that they have been used to the extent where they have started to lose the power they were originally invested with. They have become overused to the point where they have become disassociated with their original meaning and are now seen merely as the buzzwords of the tolerant left.

The danger with this disassociation is that once the original meaning has been lost the words are vulnerable to new interpretations. I am starting to see these words being claimed by the radical far right with a very different agenda to that suited to the original purpose of the words.

“Diversity,” I have been informed means the eradication of the “white race”. It is the belief of the intolerant far right that the likes of my group and others promote diversity as a means to create a homogenous racial society with one single racial identity. This is obviously inaccurate but it is also very dangerous as, by proclaiming this alternative meaning, the intolerant are further spreading the misconception that diversity is about promoting a single culture or race at the expense of others. Which is incidentally the very opposite of what diversity actually means. Where once we spoke of equality we have now moved toward the more enlightened trend of diverse thinking to embrace cultural and racial differences and to acknowledge the benefit of having different races and cultures within a community. In a nutshell this is diversity – accepting others as different and valuing them for it.

“Multiculturalism,” I have been assured, is a code word for promoting one religion (usually Islam or Judaism) at the expense of others. The intolerant far right use this to suggest that Western cultures are being “attacked” and “taken over” by non Christian faiths. The danger here is that this misuse of the concept of Multiculturalism is being used to establish a Them v Us position with the suggestion being that all faiths seek to subsume the others. As an example of this I recently came across a school that had proposed a series of school trips to a church, mosque and synagogue. A narrow minded minority of parents across all three faiths were outraged that their children were being “forced to worship other Gods” (etc). In protesting this they spectacularly missed the point. The aim of a Multicultural society is not to indoctrinate but to coexist in peace. The basic premise is that religious communities can live side by side in harmony and mutual respect. Where better for this process to start than the education system where we can teach children from a young age that in order to actualise their own beliefs it is not necessary to denigrate the beliefs of others. Kudos to the church, mosque, synagogue and school willing to take part – and shame on the parents who used the cultural development of their children to score a cheap political point.

The intolerant far right make a very big thing of the alleged unwillingness of different communities to integrate. They regularly speak of “No go” areas in the big cities. The implication is that they perceive other cultures as deliberately distancing themselves from others. They take the word integration to mean conformity and they promote the lie that other faiths and races are demanding others conform to their requirements. When as an anti-hate group we speak of integration we do not do so with the belief that any culture should water down the integrity of who they are or adapt to suit anybody else’s world view. Integration is about finding ways for faiths and cultures to work together without compromising the essence of who they are. If this can be managed in war zones where there are many positive stories of Christians and Muslims shielding one another during prayer then surely it can be embraced by first world countries in a state of peace. I would also make two further comments on this cynical interpretation of integration. Firstly there is no place in the UK that as a Western woman I would not feel comfortable visiting on my own. Secondly if indeed there are areas with high populations of individual races or faiths – how much of that is about an unwillingness for others to integrate with them rather than those cultures being unwilling to integrate with the majority? Food for thought?

It is important we hold fast to the true meaning of the words which are our primary weapons in fighting hate. If we allow the words that summarise the true values of a tolerant society to be relegated to the status of meaningless buzzwords then we risk losing them to the usurped definitions of the intolerant far right. Such a defeat would weaken anti hate supporters as we prepare for the battles of Diversity, Multiculturalism and Integration that are yet to be fought.

One thought on “Owning The Anti Hate Buzz Words”