This week it was publicly acknowledged at the highest level of British policing that as a country we have a serious problem with far right radicalisation and the threat of far right terrorism.

There have been four far right terrorist attacks foiled by the police in the UK in 2017 alone.

Most of the extremism is focused around a hatred of either Jews or Muslims. Neo Nazi organisations like National Action have openly called for violence against Jewish communities and there has been a 40% increase in attacks on Muslims in the last year.

In his lecture at the Policy Exchange think tank, current head of Counter Terrorism, Mark Rowley warned of the dangers involved in giving extremists a platform.  He spoke with particular reference to notorious far right hate preacher Tommy Robinson, stating: “Robinson became a regular fixture in our media, giving him the platform to attack the whole religion of Islam by conflating acts of terrorism with the faith, often citing spurious claims, which inevitably stirred up tensions.”

In my work with anti-hate organisation Resisting Hate I regularly encounter hate across a wide range of social media platforms. Our group have been instrumental in getting hundreds of these haters removed. But hate is the Hydra of the internet – get one hater down and another ten pop up to take its place. The only way to stem the flow of extremism and abuse on social media is to tackle the problem at source. And by that I mean to remove the high profile hate preachers from their platforms and consign them to the oblivion in which they belong.

We have reported him for racism

We have reported him for supporting death threats from his followers

We have reported him for inciting hate against an entire religion 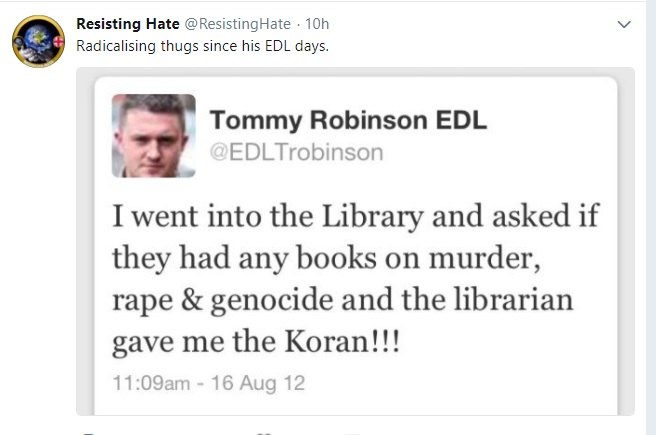 We have supplied hundreds of links and screenshots to Twitter, Facebook and You Tube. The social media giants have taken no action at all. His accounts are still active.

Robinson was one of several hate preachers named as promoters of the material that radicalised Darren Osbourne to drive a van into a crowd of people at a mosque in Finsbury Park. In sentencing the judge stated:  “[Osbourne] rapidly radicalised over the internet, encountering and consuming material put out … from those determined to spread hatred of Muslims on the basis of their religion.”

We know the material published by Tommy Robinson warps and twists the minds of the vulnerable. We know the 394,000 followers of his Twitter account are being exposed to a daily diet of lies and hatred that is indoctrinating those who follow him to hate Muslims. This man is publicly breaking the hate speech laws of the UK and yet again I am asking why nothing is being done about this?

Why are we allowing the people of our country to be put at risk by the bile spread by hatemongering idiots like Robinson?

And it isn’t just Tommy Robinson either. Twitter have decided Katie Hopkins doesn’t break their terms of service despite her posting tweets like this on a regular basis.

You Tube are happy to host videos where White Supremacists howl for race wars. Facebook have denied that Britain First contravene their community standards despite eliciting death threats and violence from their followers. Anne Marie Waters posts blatant racism to her followers and (since disbanded but members still active on social media) Liberty GB threaten to blow up mosques.

All these haters attempt to legitimise their views, some even having the audacity to try to stand for political office! They claim to stand for free speech and to represent the views of the British public. But the truth is that these people represent nothing but a threat to our country and the people who live in it.

Fortunately, without exception, all these hate preachers have a very limited offline following – Britain First has a FB audience of over 2 million but rarely manage to summon more than thirty knuckle draggers to their public meetings. ‘For Britain’ have actually had to stop holding meetings as no respectable venue in the UK is willing to host them. Most of the individuals on social media who support these high profile haters are unwilling to put their name to their views and certainly unwilling to face the consequences of openly promoting hate in their local communities.

Once the likes of Robinson have their Twitter and You Tube accounts closed they will be effectively cut off from their audience and unable to radicalise vulnerable young people with their brand of division and vitriol.

The problem begins online and it needs to end online. Get these far right extremists off their online platforms.