Matthew Wilkinson, a senior administrator close to leader John Meighan has revealed via Twitter that the Football Lads Alliance (or FLA) are “building up the numbers peacefully” before engaging in what supporter Stipple calls “action”.  Many already believe this to be the case, the massed-ranks of the united football hooligan organisation quietly developing a significant fighting force which will be unleashed at a suitable time to wreak havoc upon society while seeking the right moment to turn their mob deliberately violent.  With attendees already outnumbering police, the sudden change in tactics will catch police unaware, ensuring full-scale rioting ensues. 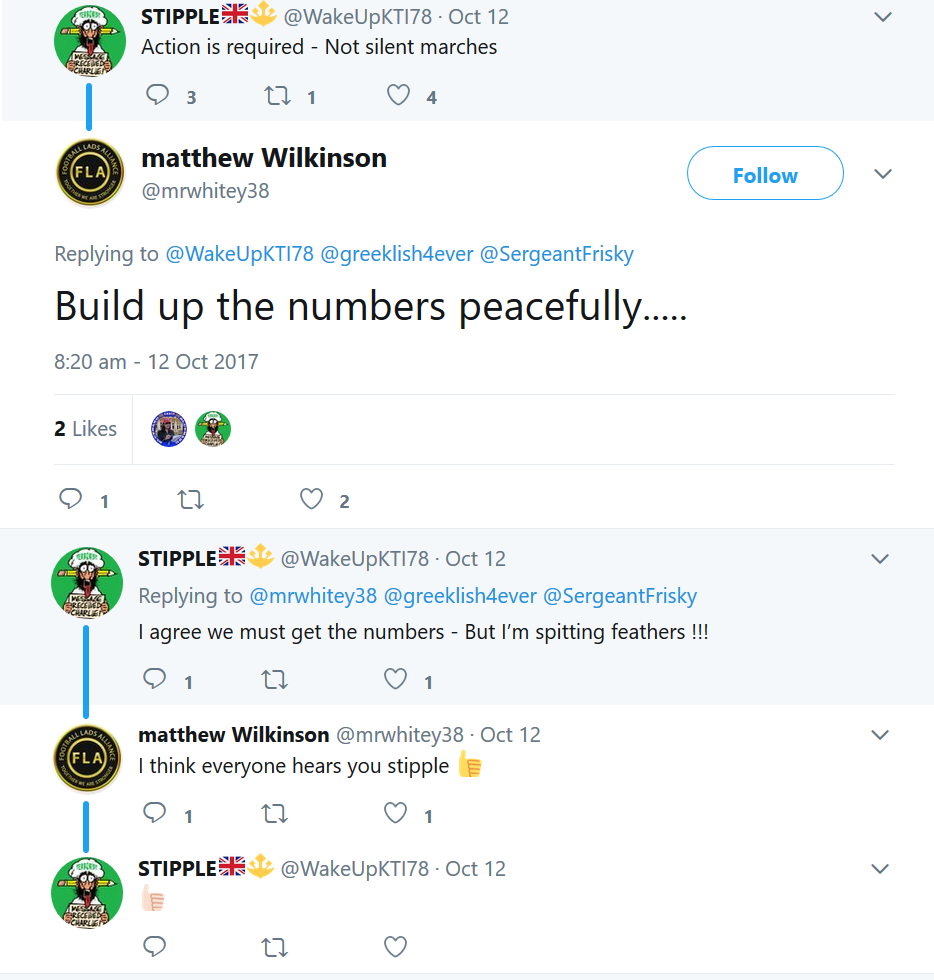 Stipple then adds: “I agree that we must get numbers, but I’m spitting feathers”.

Matthew Wilkinson then replies, in agreement: “I think everyone hears you, Stipple”, giving him the thumbs up of approval icon.

The implication is clear: – Once the numbers of hooligans marching are great enough, the restraint will vanish, and violent action will become the norm.

On another thread, Matthew admits he admins the secret FLA Facebook group, a group which the authorities will no-doubt be keeping a very firm eye on, especially having been informed by this article of their extremist plot.

When this eventually happens, and 40-50,000 angry white men are weaponised to unleash extreme violence upon the streets of the capital (or elsewhere) the government and the Metropolitan Police must be prepared to act to stop people from being seriously injured or killed.  All it would take is a stand-off against non-white passers-by to escalate into an angry episode and the nod to be given by FLA organisers to break through police lines and all hell will break loose.

Rightwing football hooligans are ready-made fighting units.  Differences set aside to oppose “their common enemy”, the consequences of an organised group running free through city streets are easy to understand.  When a future FLA demo becomes a large-scale riot, the government must be prepared to act with the necessary swiftness to protect society and come down hard on the FLA leadership utilising the full force of the law.

A deliberate plot to build up a private army of boots and fists peacefully, linking rival hooligan firms to engage in future acts of organised racial disorder in massed-numbers when the time is right, amounts to both terrorism and even the offence of treason. The Home Office will be compelled to act to ensure all plotters receive lengthy prison sentences for such actions, when they finally happen.

Years spent in solitary confinement likely await the conspirators with all football hooligans involved in the movement more than likely receiving life-bans from stadiums. Whenever Matthew Wilkinson and cohorts intend to unleash ultra-violence, society must be ready to act firmly and swiftly to protect minorities and punish guilty parties severely.

A mere glance at the FLA’s Facebook page reveals the regular presence of Frank Portinari, the convicted gun-runner who tried to sell deadly weapons to the Unionist terrorist group the UDA.  A week before the previous FLA demo, a Hope Not Hate photographer pictured him in a Central London pub chatting to supporters of the FLA.

Portinari was a member of neo-Nazi Hitleresque organisation Combat 18, siding with Charlie Sergeant in the split which occurred, Sergeant later exposed as a police informer spying on loyalist terrorists in England.

After what happened at Charlottesville, USA, police and government security forces throughout Europe are keeping a keen look-out for far right terror plots. They are fully aware of the ramifications of allowing such groups to develop unchecked.  A common theme of fascist groups operating on social media is the promise of racial warfare, the premise that battalions of angry white men will rise up in a deadly battle against non-whites (and their liberal “defenders”), actioning a revolution and a dictatorship by Adolf Hitler-type genocidal extremists.  Although this is almost certainly not going to happen, any episodes of unchecked violent outrage against Muslims and other minorities will have catastrophic implications for community relations. The deceitful haters are more than aware that it is the minority groups who will bear the brunt of this chaos.

Right-wing trolls continually mutter “Islam is not a race” whilst hardcore neo-Nazis and white supremacists continue to switch (albeit temporarily) from anti-Semitism to Islamophobia, viewing anti-Muslim hate as their best chance for success in an increasingly paranoid pro Brexit, pro Trump world. Bearing in mind that 95% of British Muslims are non-white and a visible ethnic minority regularly vilified by the British gutter press, it is easy to understand how latching onto public unease over Islamic extremist groups and sailing with the extreme right-wing agenda of Katie Hopkins and the Daily Mail offers far more promise than selling copies of Mein Kampf to small handfuls of National Socialists outside Blood and Honour concerts.

Openly neo-Nazi organisations such as the Pie and Mash squad are already taking part in FLA demonstrations. They are expecting something violent to happen in the not too distant future, or frankly, they wouldn’t be there.

Now the FLA’s true intent has been well and truly exposed, there is little that convicted hooligan John Meighan can do to sweep this damning admittance of violent intent under the carpet, other than pretending Wilkinson is not a key member of his dangerous street protest organisation, which he most certainly is. Just as Diane Abbott and the trade unionists feared all along, the presently peaceful FLA are a Trojan horse for future, organised mayhem.

It doesn’t matter how many Gurkhas the FLA get on their marches as window-dressing, now they have come clean about dropping their sanitised front and acknowledged they are ready and willing to unleash violence when protest numbers reach critical mass, Meighan’s Blackshirts are ready and waiting for trouble…