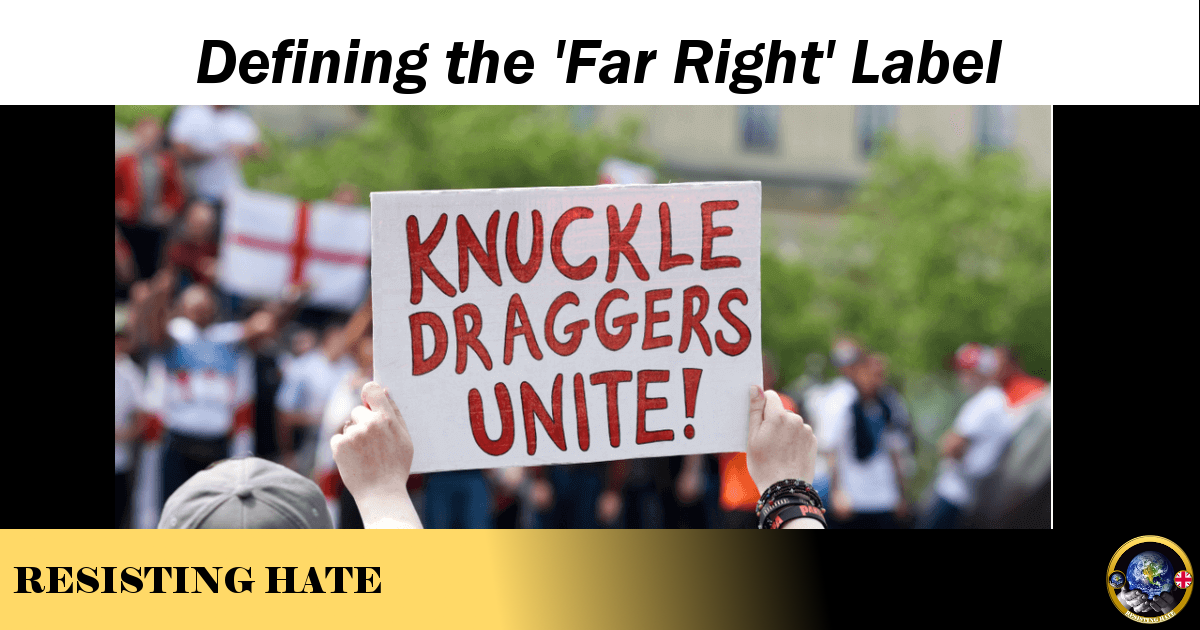 Guest article, originally published here and reproduced with permission of the author.

With the resurgence of far right groups across the globe, and their encroachment into mainstream politics, you will often see supporters or members of such groups attempting to question their Far Right label.

Perhaps they truly do not believe the group they are associated with is Far Right, and feel that the negative association with their movement is unfair.  Given the Overton Window has shunted to the right in recent years, this could be a plausible explanation – for example, some of the ideas these people have, are now considered acceptable on the hard right of the Conservative Party in the UK.  Or perhaps they know they are Far Right but willfully want to confuse potential recruits.

In both cases the little public understanding of how this is actually defined often allows these groups to throw doubt on the label.  They will suggest that the Far Right label is incorrect and will ask “what makes them far right?” hoping that the question cannot be comprehensively answered, essentially making the the label meaningless, and enticing those who agree with some of their ideas but do not want the negative association.

So how do we define this political position?  The most succinct definition is that far right ideologies discriminate against or promote hatred of one or more groups of people based on their race, ethnicity or religion to achieve an unequal outcome.

In a recent appearance on BBC Big Questions, Anne Marie Waters insisted she and her For Britain party were not far right, and looking through their manifesto would prove this.  As detailed in my earlier “Bigots For Britain” article, the manifesto actually conclusively proves that Anne Marie’s party is indeed Far Right by specifically having policies which target Muslims –  denying citizenship, monitoring mosques, closing down the madrassas which teach groups of children how to read the Quran and banning face veils. On top of this, the manifesto proposes measures designed to isolate Muslims and turn the rest of society against them.  They make it clear that they believe that Islam is a violent ideology, incompatible with British society and they want this belief to be communicated to the public in order to turn them against their Muslim neighbours, colleagues, friends and even family.

Assessing whether a political or pressure group with clearly defined policies is Far Right, is therefore often fairly straight forward.

But what about individuals unaffiliated to a Far Right group?  Can an individual such as Tommy Robinson or Katie Hopkins be proven to be Far Right?

In this case, we can only take into account views they have publicly expressed on the various media platforms.  Do they concentrate on expressing negative opinions on particular racial, ethnic or religious groups? Do they attempt to “other” another group by making them appear to be alien and culturally incompatible?  Do they suggest measures to target a particular group, which they would not expect to apply to the general population?

An excellent Twitter thread by @ZaeemAnger shows a number of clips from Tommy Robinson videos which show he meets the Far Right definition.  https://twitter.com/Zaeem_Anger/status/1092885677040119808

Tommy rarely suggests solutions or policies but has proposed an end to specifically Muslim immigration and the establishment of Mosques. However, what he does do is regularly unleash divisive rhetoric to stir up hatred and anger towards Muslim populations, suggesting they are invaders with an alien culture completely at odds with western values.  He will often claim that he is anti Islam and not anti Muslim, but then goes on to specifically attack Muslims such as British-born London mayor Sadiq Khan who he said was part of an “invasion” or smear the entire group by not differentiating between mainstream and radical Muslims.

As for Katie Hopkins, her infamous tweet following the horrific Manchester Arena terror attack where she called for a “final solution” was bad enough.  Even if she did not intend for this to be interpreted as a call for genocide, the subtext was to hold all Muslims accountable. In other tweets she has dehumanised groups, calling migrants “cockroaches” and “feral humans”, while referring to Palestinians as “filthy rodents”.  In a speech to an American audience, she launched scathing attacks on Muslims and advised the audience to arm themselves and fight for their country. More so than Tommy Robinson, Katie does not offer any policies, but does her utmost to promote hatred against target groups.

It is the actions and rhetoric of both Tommy Robinson and Katie Hopkins  which places them on the Far Right. It is not, like they and their supporters claim, “the left” labelling anyone they disagree with to be “far right”.  There are clear indicators based on what they themselves have allowed to be released on the public domain.

Perhaps anyone who disapproves of being considered Far Right just needs to take an honest detailed look at their own public interactions and determine what has given people that impression.