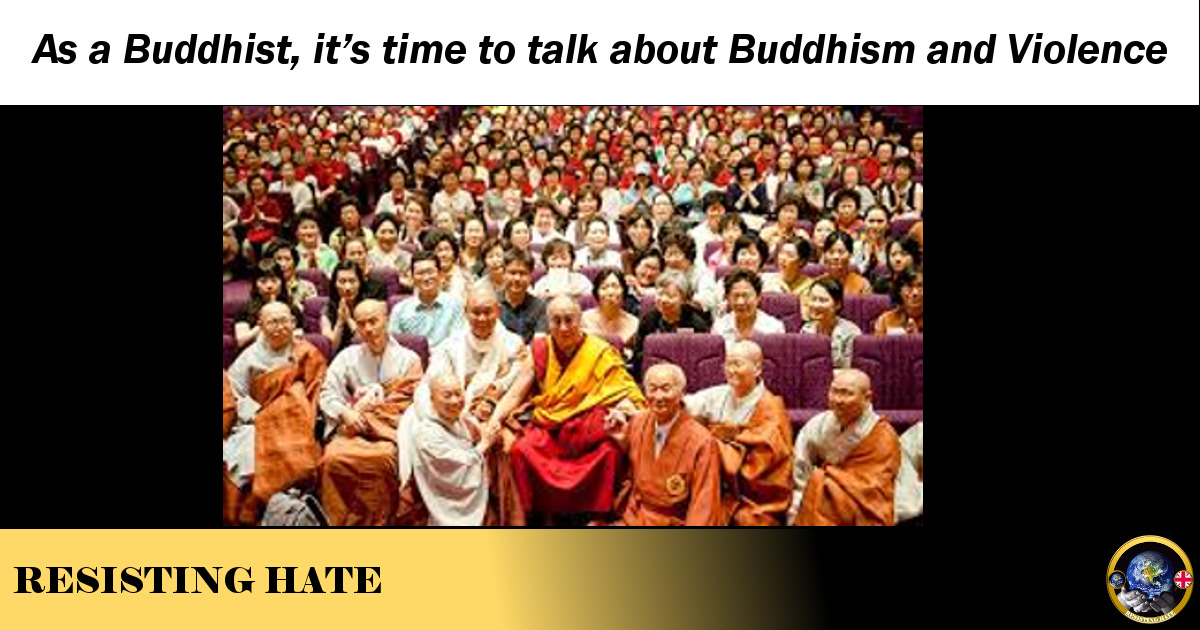 A guest article by Lee Clarke

Many readers seeing the title of this article may question the premise of putting the words “Buddhism” and “Violence” together in the same sentence unless it is talking about non-violence. Surprisingly for some, this article will be about the total opposite because, contrary to popular belief, Buddhism has been involved in violence many times throughout its history and it is something that many either simply don’t know about or choose to overlook.

Do I have something against Buddhism? No. I am a Buddhist and consider myself quite religious in this respect.

So why am I writing this article at all and speaking ill of my own beliefs? My answer is because most people think the only “violent” religions are the monotheistic ones, mainly Christianity and especially these days, Islam too. Many people, especially Westerners, tend to place Buddhism within a kind of ‘bubble’. It is a faith that has never and can never do any wrong in terms of violence.

I agree that non-violence and pacifism is at the heart of Buddhist doctrine and philosophy and this can easily be seen in the teachings of the Buddha but that doesn’t mean that this aspect has always been fully adhered to. My purpose is to show that there isn’t a single religion or belief system that has not at some point been twisted and used to justify violence or killing. This has been an unfortunate rule of human history and Buddhism is no exception to it.

These are the teachings of the Buddha:

“That one I call a Brahmin who has put aside all weapons and renounced violence toward all creatures. Such a one neither kills nor helps others to kill”.

“They are not following dharma who resort to violence to achieve their purpose. But those who lead others through non-violent means, knowing right and wrong may be called guardians of the dharma.[1]

““Monks, even if bandits were to sever you savagely limb by limb with a two-handled saw, he who gave rise to a mind of hate towards them would not be carrying out my teaching”.[2]

Japan offers prime examples of Buddhists who have rejected these teachings as its wonderful culture has been heavily influenced by Buddhist philosophy and tradition. It has for centuries had a very strong warrior and military culture, the most well-known feature of which here in the West is the Samurai. The Samurai were mainly driven by their Bushido code which was also influenced partly by Zen Buddhist doctrine. As Ben Hubbard writes:

“Buddhism taught a warrior not to fear death as he would be reincarnated in the next life. Zen helped a warrior to ‘empty his mind’ and maintain clarity in battle”.[3]

Whilst Zen Buddhism was not the only influence upon the Samurai, they still followed Buddhist beliefs to a large extent to help them become better fighters and to cope better in battle. Although the Samurai fought mainly to protect clan leaders and Shoguns rather than for any religious purpose, they are still example of Buddhism being used to aid acts of violence.

As well as the Samurai, the Sohei who were also warriors, the main difference between the two being that the Sohei were actually Buddhist Warrior-Monks, not unlike the Christian military orders during the crusades who combined the monastic life with that of a soldier. They were formed when different sects and subsects of Buddhism fought each other for political dominance and at times were very powerful. Though they also fought for manly political purposes, the fact that they were actual practicing monks shows that even Buddhist clergy sometimes took up arms.[1]

In 1997, Brian Victoria wrote the brilliant book ‘Zen at War’ which sent shockwaves through the Buddhist world and reveals how both during and before the Second World War, the doctrines and teachings of Zen Buddhism were ruthlessly twisted to support Japanese nationalism and imperialism. Combining Zen with the previously mentioned Bushido, war was said to be a vital step towards enlightenment and killing became religiously justified.

Zen views on life death were used to make soldiers and airman believe that their lives as individuals were worthless and without meaning unless sacrificed for the emperor who became regarded as divine. The Bodhisattva of compassion, Avalokiteśvara, known in Japan as Kanzeon was entreated to bring Japan victory over its enemies with monks in temples raising huge amounts money to buy military equipment for the army.

Surprisingly, many Japanese Buddhists, including very high-ranking Zen teachers supported the war willingly because to them it wasn’t just a secular war, it was a Buddhist holy war, fighting against the ‘heathen’ enemies of the Buddha. To kill and conquer became a religious duty.[2] Indeed, many Zen leaders and sects in the years after the 9/11 attacks have issued formal apologies for their actions in the war. Japan is not the only country where Buddhists have engaged in violence due to nationalism either. In Sri Lanka recently, violent Sinhala Buddhist nationalists have been targeting Muslims in deadly attacks. The root of this conflict have its roots in politics and spring back to the Sri Lankan Civil War which was fought between Tamil rebels and the Sinhala government which composes the majority ethnic group in the country. The reasons for the civil war go back to the Sri Lankan Independence Movement and the fact that in its first constitution, the Government said that the state would admire Buddhism above other faiths on the island.[3] On top of this, an ultra-nationalist Buddhist group known as Bodu Bala Sena (BBS) has been making inroads into Sri Lankan politics and its general secretary and pubic mascot, Galagoda Aththe Gnanasara gave an incendiary speech in 2014 threatening genocide against the Muslim minority should they touch a Sinhalese.

In Myanmar recently, the Rohingya Muslim community have been suffering massive violent attacks that have sent hundreds of thousands fleeing to neighbouring Bangladesh and which the UN has called ‘a textbook example of ethnic cleansing.’[2] Many of the soldiers and others who are killing people and forcing them out of their country claim to be Buddhists. Many are doing in it the name of Buddhism and view the Rohingya as ‘illegal immigrants’ who follow a ‘violent and dangerous’ Islam that wishes to conquer Buddhism. The reasons for this conflict as usual have their roots in history and the British colonial period but these people who are doing this still call themselves Buddhists.[3] Indeed the influential fundamentalist 969 movement in Burma is lead by an ordained Buddhist monk named Wirathu who disgustingly once called himself ‘The Burmese Bin Laden’. This group tells Buddhists to shun interfaith marriages, boycott Muslim places of work and worship and refers to the Rohingya and Muslims as ‘the enemy’.[4]

As a sidenote, despite what many may believe from these and other historical events, there have been many examples of religious tolerance and cooperation between Buddhists and Muslims. Buddhists and Muslims have interacted for centuries, lived together and more importantly have learned from each other. For example, a book exists called ‘Kitab Al-Bud’ or ‘The Book of the Buddha’ which is an Arabic account of the Buddha’s past lives. Buddhist medical and religious texts were studied by Muslim intellectuals and vice-versa. Buddhist scholars were invited to the famous ‘Bayat al-hikma’ or House of Wisdom in Baghdad which was the centre of Muslim intellectual culture and one of the main Buddhist monasteries in Central Asia, Nava Vihara functioned for a century after the region was conquered by Muslim armies. Lastly, despite their destruction by the Taliban it should be noted that the famous Buddhas of Baiyan were left standing for over a thousand years in Muslim lands when they could have just destroyed them. This is a story and a history that the extremists in Sri Lanka and Myanmar would do well to learn from. [5]

Many may point out that the majority of all of these conflicts stem from political, rather than religious extremism and it would be a fair comment but the point is that many conflicts that are seen as ‘religious’ including extremism within the Abrahamic traditions are indeed to do with politics with religion being brought into them to either justify it or further it. Some conflicts are of course based more on religion but most are a mixture of both and I believe that this is the case in many of the ones I have cited. Many may also say that the teachings of Buddhism are non-violent and therefore these extremists can’t be Buddhist. I’d agree, but then Christianity and Islam have many non-violent teachings too and no religion teaches the murder of innocents, yet these are still frequently disobeyed, and innocents are killed in the name of those religions. Unfortunately, Buddhism has not been shielded from this aspect of human religious culture.

My purpose in this article has been to demonstrate a truth that I have discovered in my studies of religions. There is not a single religion or belief system that has not at some point been taken out of its context and twisted in order to justify violence and intolerance. We must remember that no matter how holy or enlightened a religion’s founders were, the followers are humans and human beings are imperfect and fallible. Pretending that Buddhism and Buddhists haven’t ever been involved in violence, nationalism or the spread of hatred does a disservice I feel not only to the faith itself but also to the victims of that violence. There is no doubt that the Buddha and all the great Buddhist philosophers, poets and monks would be horrified and heartbroken by the events I have described, as would their Christian, Muslim and Jewish counterparts when seeing their own examples of religious fundamentalism.

Putting Buddhism on a pedestal and pretending that this violence has not happened means that we cannot learn from it and thus makes it bound to occur again. What I hope has been shown is that Buddhism, like all other religious traditions has had great highs and extraordinary lows and has shown both the best and worst of humanity.

Buddhism teaches one to seek the ultimate truth and therefore I have a religious obligation to tell it.

For further background information on the path of Buddhism and the beliefs, practises and history we strongly recommend this excellent article by Dallen:

Buddhism: A Look Into the Beliefs, Practices & History

[9] Dan Arnold and Alicia Taylor. Why are we surprised when Buddhists are violent? (2018). Available at: https://www.nytimes.com/2018/03/05/opinion/buddhists-violence-tolerance.html [Accessed 10th February 2019]