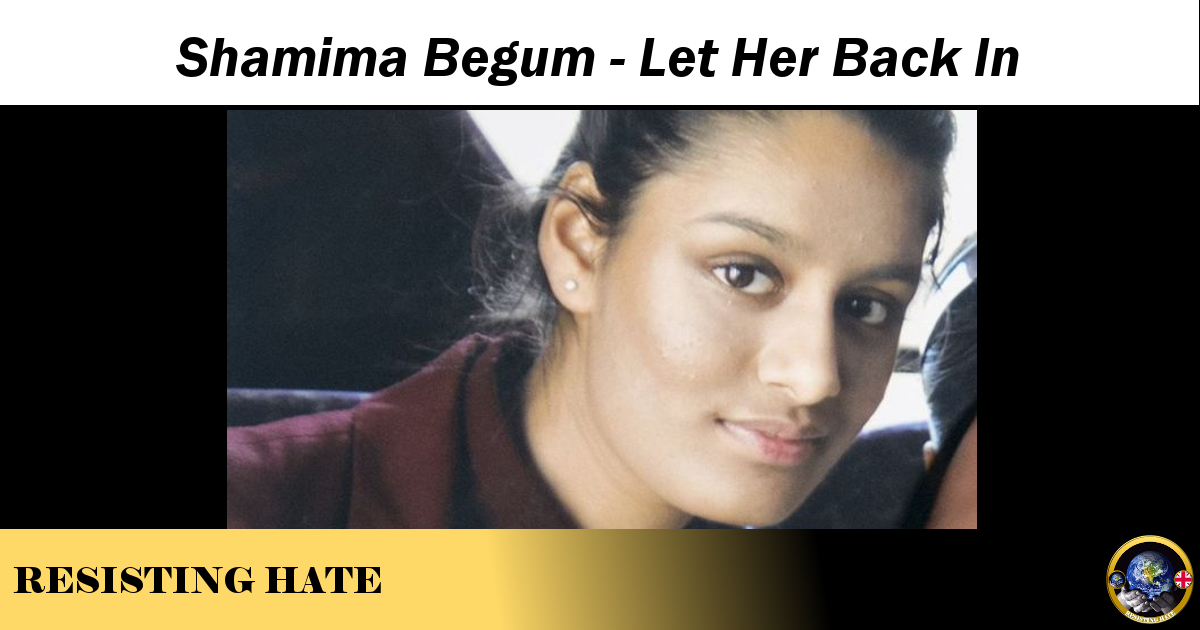 Few issues have been more divisive recently in the politically progressive community than the question of whether Shamima Begum should be allowed to return back to the UK after leaving the country to join IS. It is an emotive subject that raises both human rights and safety questions. However it has a clear answer, and an answer that I would argue is the only conclusion that a fair and humane society can reach.

Shamima left the UK in 2015 with two fellow schoolgirls Amira Abase and Kadiza Sultana. The three girls enacted plans to fly to Istanbul where they would cross the Turkish border and join up with the fighters of Islamic State (IS). According to the limited information that has filtered back to the UK, all three girls married IS fighters. It is believed that Amira and Kadiza lost their lives in the conflict zone. In early 2019 Shamima made contact with a journalist and asked for help returning to the UK. When she first expressed this wish she was heavily pregnant and seeking to return home for the sake of her child. She has since given birth to a healthy baby boy.

The primary argument in favour of not allowing Shamima back into the UK is that she poses a threat to the British people. I agree this does need to be taken seriously. She will undoubtedly have established contacts in her time with IS that potentially could have harmful implications. However she will be watched if she is to return to the UK. Nobody is advocating that we allow the lady to return without strict supervision. The level of monitoring she will be subject to would make any anti UK action impossible.

It may be naive to assume Shamima as an individual is a threat to the UK but it is plausible that she may be seen by other IS supporters as a central figure, a leader who they could rally around. It is argued that her experiences could be used as propaganda for radicalising others. However I would point out that the very fact Shamima wants to return to the UK would invalidate any attempt she might make to portray joining IS in a positive light. It would be very hard to be convincing that the grass over there is greener, given the efforts she has made to return to this particular pasture. If anything, her experiences serve as a warning to other young girls who may be considering similar action.

It is also important to consider the fact that there will be some level of consequence, possibly even a detention sentence for Shamima. This will act as a further deterrence for anyone considering similar action. Our judicial system is based on the principles of both retribution and rehabilitation. Appropriate rehabilitation for Shamima, who acknowledges she has strong religious beliefs, would be spending time in the Islamic community (the genuine Islam that unlike the extremist IS allows millions of people to contribute to our society without attempting to overthrow it) with a view to understanding why British Muslims as a whole reject IS and Islamic extremism.

Shamima’s family have never shown any signs of radicalisation or supporting IS. In returning to the UK Shamima would be returning to a British family with no extremist sympathies. This would help support positive rehabilitation.

The lack of regret Shamima has expressed has been a sticking point for many who would otherwise have supported her return to the UK. But they are missing the crucial point here. Shamima has been honest. She could have squeezed out a few crocodile tears and played to the sympathy of the British public but instead she has chosen to be honest about how she views her experience. This honesty gives credence to the fact that her motives for returning to the UK are genuine.

Shamima’s time with IS also led to the birth of a child and no mother can be expected to regret the circumstances that produced her baby.

It is important to consider that since giving birth the discussion is no longer solely should Shamima be allowed back into the UK but should Shamima and her innocent child be allowed back to the UK. No arguments relating to Shamima’s conduct apply to her child. We have a moral obligation to allow this British child to enter the UK. We also have a legal obligation not to leave Shamima (who is a British citizen) or her baby stateless.

In permitting Shamima to return to the UK we give ourselves a unique opportunity to understand not only the process by how UK teenagers are radicalised but also the psychology of how young people are groomed into accepting extremist ideologies. This is an invaluable tool in the fight against extremism and radicalisation. If we can understand why young people are attracted to extremism we can learn how to prevent it. Shamima can help us to gain that understanding.

But the most important argument in favour of allowing Shamima to return to the UK is the fact that she was fifteen years old when she was radicalised and influenced to leave her home country. In my view the radicalisation of a child is nothing less than child abuse. And in this as in ALL cases of child abuse it is the abuser and not the victim who should bear the blame.

Bring her back, watch her, rehabilitate her, learn from her and prove that in this country we do not hold children accountable for those who commit acts of evil against them.

12 thoughts on “Shamima Begum – Let Her Back In”