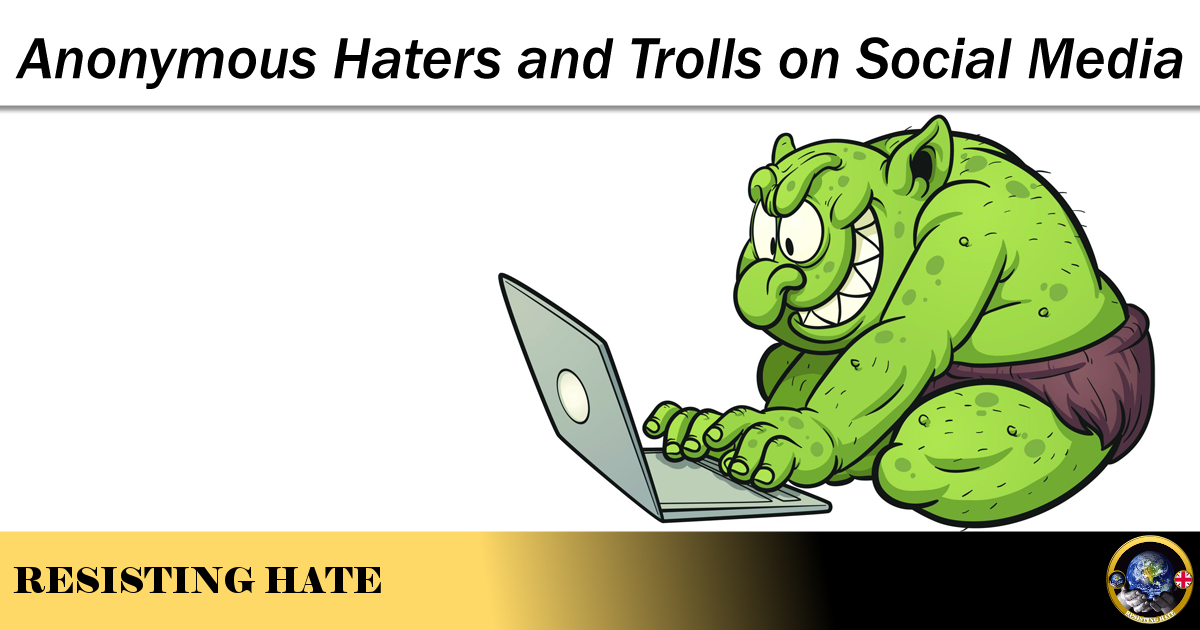 In a heated exchange with the leader of an online hate group several years ago I scorned his comment that “The wars of the future would be fought on social media.” But these days I am not so certain he wasn’t being uncharacteristically prophetic. Social media is proving to be a fertile ground for anonymous haters, trolls and abusers to spread their vitriol without fear of censure. Facebook and Twitter in particular attract a highly undesirable element who conduct themselves on the internet in a manner they would very likely not dare to in a face to face environment.

The first group of problem social media accounts genuinely believe what they are saying. They are willing to involve themselves in discussion and make some attempt to offer evidence to back up their assertions. The trouble is that they are ignorant in the sense that they cannot discern genuine facts from fake news and bias.  They quote from secondary sources, blog sites and tabloid newspapers and frequently mistake opinion for fact.

In this category I would place the people who have no particular convictions but who are responsible for sharing and liking a lot of the hate that becomes popular on social media. A prime example of the Easily Led would be the people who share click bait pictures and memes from Britain First and, thus unwittingly, give more oxygen to organised hate groups.

For some individuals online hate is a method to propel them to notoriety. We have seen this with extremist characters like Katie Hopkins and Tommy Robinson who put out more and more extreme posts in an attempt to build a platform for their hate. Their overriding objective is personal fame. This can also be seen with a lot of accounts who use hate speech to gain followers and, therefore, popularity on social media platforms.

In the modern world of the internet – racists, homophobes, Islamophobes and Anti Semites no longer need to lurk in the dark shadows of their local pub sharing views with a handful of people. Social media is the perfect tool for this category to spread their genuine hate and prejudicial views.

This category absolutely believe in what they are saying and actively attempt to convert others to their way of thinking. Unlike the Ignorant these people are not being swayed by propaganda – this lot are the ones creating the propaganda.

Trolls basically just like causing trouble. They will take the most contentious side of any online debate but have little interest in anything other than the reaction they will cause. They will throw insults, harass and target people in the hope of causing distress. They are usually pretty thick.

In order to combat the rising tide of hate on social media it is important that all these different categories of people are tackled. Each category needs to be approached with different tactics.

In the case of the Ignorant it is important to educate them. Link to quality news articles, statistics, and fact based media to encourage them to challenge their views.  It is also important to humanise the victims they are dehumanising. Share personal accounts from individuals in minority groups who have experienced hate and discrimination so the Ignorant can understand the very real impact their hate has on others.

Don’t get downhearted if they openly reject the information you provide. It is more important to get them thinking than it is to emerge the victor in a Twitter row.

Education is also the best tool against the Easily Led. Don’t be afraid to tell friends and family why you found that meme or picture that they shared offensive. In some cases they may genuinely not know that “Like and share if you think this puppy is cute” is actually a cynical marketing ploy for hate pages to acquire more likes and followers.

The best way to react to the Fame Hungry is not to respond at all. Any reaction will give them the result they want which is increased exposure for their views. Sharing their posts or retweeting them – even with a view to shaming them – will just enable their hate to be seen by more people. There are exceptions to this, Resisting Hate and other anti hate groups will sometimes share hate posts in the full knowledge that our followers will report the accounts where they breach social media Terms of Service. (Be careful however not to openly ask people to report as this can get your own account suspended. We usually just highlight the offensive post and then trust our followers to make their own judgement about reporting.)

Prejudice Promoters clearly need stopping. There are a great many places where the perpetrators of online hate can be reported. Reporting these accounts can help to limit the spread of their influence and will also deter them from making new accounts to spread their bile.  Not only can hate be reported to the social media platforms themselves but in cases where a post on social media is breaching the laws of the country it is often worth bringing it to the attention of law enforcement too.

Resisting Hate often contact the employers of radical haters with screenshots of the views they are promoting and this has tactic been very successful in establishing clear consequences for the publication of discrimination and prejudice using social media accounts.

Most social media platforms also have the function where problem accounts can be muted or blocked. Take full advantage of these tools. You have every right to engage online without being subject to abuse.

One thought on “Anonymous Haters and Trolls on Social Media”