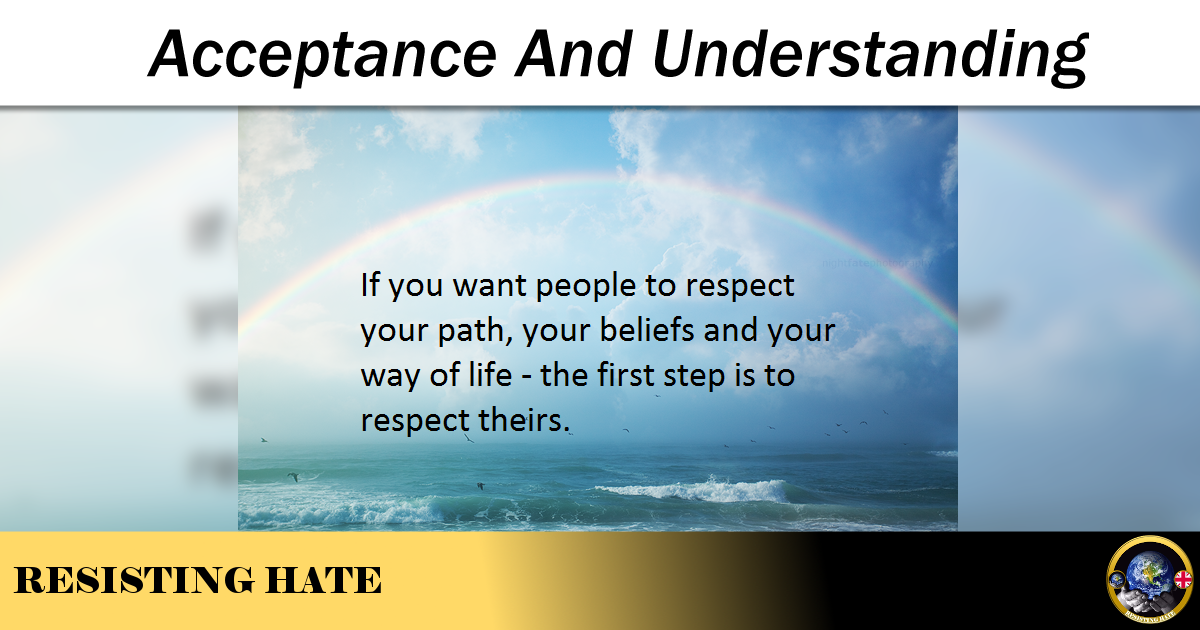 As a co founder of anti hate group Resisting Hate I encounter prejudice every day. Social media is rife with bigotry toward Muslims, Jews, the LGBT community, People of colour, women and indeed just about every demographic and community in the country.

It is important to be clear that the peaceable majority of people, both on and off social media, do not endorse prejudice and hate. The voices of the vociferous minority can be and are tackled regularly by those of us who stand up for the values of equality and diversity and who reject the idea that anybody should be persecuted for being true to who they are as an individual.

However it is important that we combat prejudice in the right way. I am concerned that the criteria for acceptance is all too often intertwined with the need for personal understanding. The rationale is – If you can make me understand why you need to do something then I will defend your right to do it. But this is narrow minded because what it is actually saying is that in order for your actions to be acceptable they must be validated by my values, not yours.

To give a specific example of this, I witnessed a discussion on Twitter the other day between a practitioner of the Jewish faith and a (rather belligerent) individual who objected to the practise of ritual animal slaughter under Kosher laws. The objector was asking a string of questions demanding the Jewish person explain the belief itself, why he felt it necessary to follow the practise in his personal life and whether he thought religious slaughter was in keeping with British cultural values. The expectation was that in order for the objector to accept the right to religious slaughter he must first have it explained to him in such a way that made it compatible with his own personal world view.

I encountered something very similar after publishing my article on the rights of Muslim ladies to wear the niqab. A lot of the comments I received were directed at the perceived need for Muslim ladies to explain why they felt the need to cover their faces. The implication was that if they could justify this need to the satisfaction of the niqab detractors then that would make the practise more acceptable.

The trouble with this way of thinking is that is bases the concept of acceptance on the personal views and ability to understand of those questioning the practises of other faiths and cultures. This is effectively prejudice in itself because it is denying the rights of others to self validate. It is my view that accepting the practises of other faiths and cultures should not be based on their ability to explain themselves in such a way that makes them palatable to Western values. We need to respect the rights of others to determine what is right for them based on their own values and beliefs.

To return to the example of the niqab, it is not necessary for me to understand why a Muslim lady would want to wear it or to have any desire to wear it myself in order to respect her right to make the choice that covering her face is appropriate for her. If I make this issue about my understanding and my cultural values then I am essentially saying that my values are more important than hers which is, of course, just reinforcing discrimination and prejudice.

Defending a person’s right to practise their faith or culture is not about understanding why it is they do what they do. It is about appreciating that people have the right to act in accordance with their own cultural values even if they cannot easily be understood by others. What we as battlers of prejudice should be doing is defending people’s rights. It was not necessary for our Kosher law objector to understand why it was important to the Jewish practitioner that their food be kosher. It should have been enough that it mattered to the Jewish individual, that it worked for him and that he was acting in accordance with his own world view. It was his right to act as he deemed fit, regardless of anybody else’s inability to understand why Kosher slaughter was important to him.

This isn’t to say that we shouldn’t ask questions about other faiths and cultures. To the contrary I am very positive about the fact that a greater level of knowledge of other cultures will help break down barriers and tackle prejudice. But it is important that we do not underpin our acceptance of others on our ability to understand them.

True acceptance and true respect must be based on the principle that even if you do not understand what is necessary for someone to actualise themselves as an individual, you support their right to make the choice and you defend their right to it.