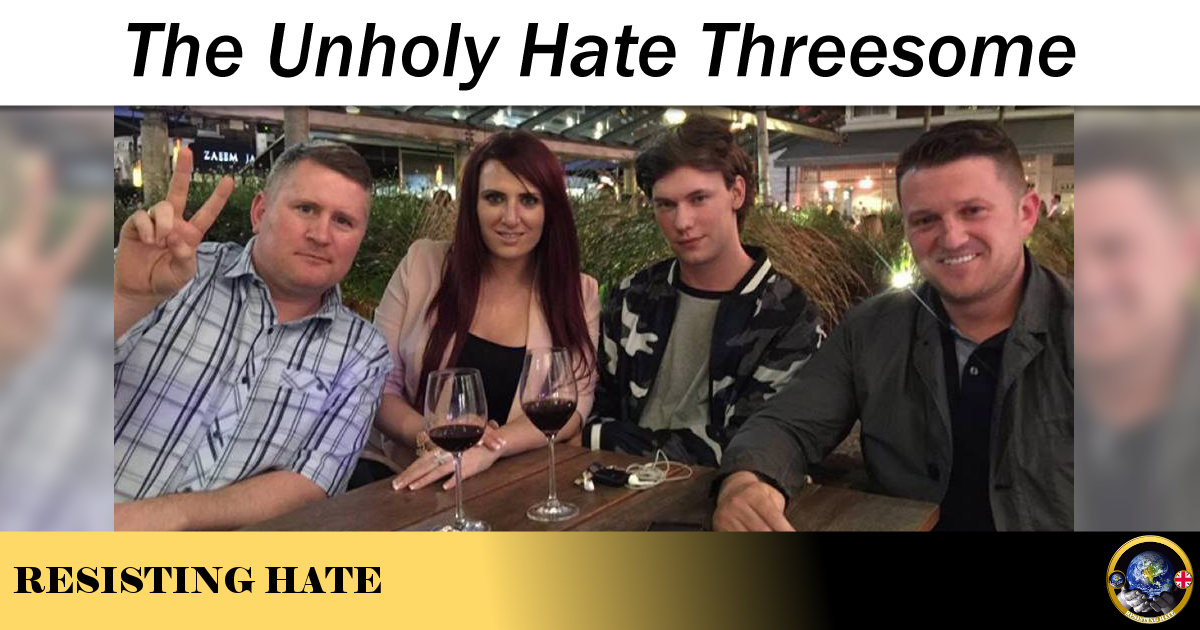 It probably won’t have slipped your notice that Tommy Robinson recently got arrested following his “interview” outside Canterbury Crown Court, in which he tried to interview individuals who were on trial there. The same thing has happened following Jayda doing the same thing, and she also went further by going to a property where the defendants supposedly lived (they didn’t) where she proceeded to screech through the letter box after banging on the door.

I then started to think of the relationship between Britain First and Tommy Robinson, as they seem to be very cosy with each other.

Now, back in April, the EDL and Britain First got together to form a laughable demonstration against Muslims in London. Prior to this, a photo of them planning the demos was put out on social media, showing Tommy Robinson together with Jayda Fransen and Paul Golding at a trendy London wine bar. The Independent then ran with this report on the day, with the headline “Police make 14 Arrests as rival groups clash at joint Britain First – EDL protest in London” (here) – note the use of the word “joint” in this, which with the photo of them together gives the idea that they were in it together. Considering Tommy is apparently nothing to do with the EDL any more and isn’t even a member of PEGIDA, why did he go there to be part of the demonstrations, necessitating the use of a police “bodyguard” as he got harassed through the streets.

Jayda was quick to use one of Donald Trump’s favourite sayings and put out a tweet that it was all “#FakeNews on steroids”. She maintained that there were 30 EDL supporters and 300 Britain First supporters who turned up for “SEPARATE” demonstrations and they were nothing to do with each other. This all sounds like Screechy is protesting about it a little too much.

Following that demonstration, there seems to have been a fair amount of “crossing paths” of the two sets of people. Too many instances in fact to suggest it to be a coincidence.

As the Huff Post showed, both Britain First’s infamous duo plus Tommy Robinson went to Birmingham and did one of their usual traipsing through the streets with their big white crosses while handing out abuse to locals. Following an exchange with one of the local Muslims, they ended up scarpering to their vehicle and sped away from the scene on camera. I have to add that personally, I find these escapades laughable – their panting, breathless commentary and descriptions make it sound like they had just driven into the middle of a war zone and got shot at and barely left with their lives. As it is, Britain First have been condemned by the church for being unchristian though they dispute this saying the church is morally bankrupt.

We come to the latest debacle. Tommy Robinson went to the Canterbury Crown Court with his latest incarnation as “roving reporter/idiot/halfwit” for Rebel Media. (If you aren’t aware of what Rebel Media is, imagine either watching a combination of Alex Jones/Infowars and Paul Joseph Watson, or imagine having your brains smashed in by a slice of lemon wrapped round a large gold brick – a bit of HHGTTG there for you). He had been warned by the police for doing what he did, leading to his arrest.

The full details relating to the arrests of Paul and Jayda are still to be made clear as nothing has been confirmed at the moment. Apparently they aren’t allowed to say anything about it, which is leading some people to question if it actually happened at all, as Tommy was able to say why he got arrested.

As the police have said in their statement to the press, the people involved are on bail, they have not been convicted of anything at the moment as they are on trial. I do wonder what would have happened if “lefty media” had done the same to them when on trial? Would that have opted to give an interview and thought that having a camera shoved in their face was acceptable, or would they have said that they were being unfairly treated because “we aven’t done nuffink, this is are country after all”  In addition to this, as showing in the email from Kent Police, they are already short of staff without having to deal with bigoted halfwits who are wanting to “expose” something that doesn’t need to be exposed.

I just hope that the three of them are dealt with in a way which stops them acting as they do. By getting basic cautions or just a few weeks inside they get their followers to pay via their “help our poor Paul and Jayda who are being victimised by the police” fund, and they come out of prison and get treated as celebrities by the following they have.

This needs to stop, and stop soon.