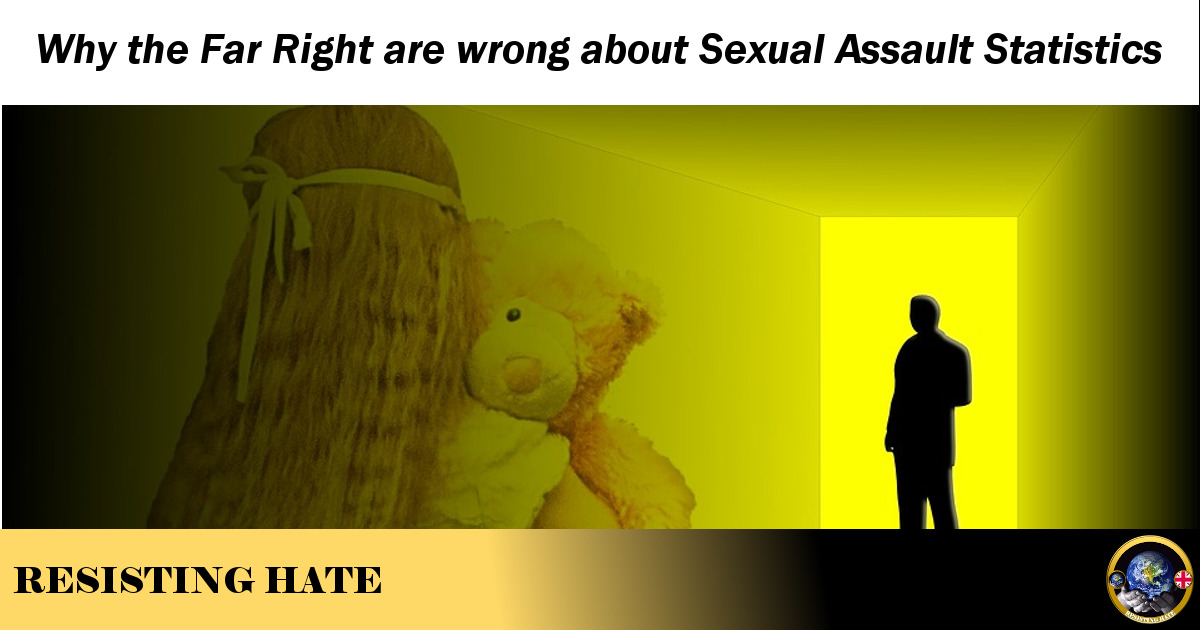 This is probably the toughest and most hard hitting article I have ever or ever will write. But it needs to be written.

There is a lot of exposure within the media, not just over here in the UK, but also across the ocean in the USA regarding the inhuman crimes of rape, child grooming and sexual abuse.

There isn’t a word to justifiably describe how sickening these crimes are. When I hear about incidents that involve the abuse, harm and sexual exploitation of children it tests my blood pressure beyond measure. It gets me angry to the point where I’d actually like to collide my fist in the mouth of the vile disgusting specimens who prey on innocent children.

We all feel the same about it, it disgusts us all (and just writing about it is getting me wound up) But it is an issue that really needs to be spoken about. We can’t brush it under the carpet any longer and we cannot go on pretending crimes against children are not becoming an increasingly worrying problem in modern society.

I recognise there is paedophilia in every race and religion. I don’t view any religion or race as having a monopoly on paedophiles or rapists. Doing so would make me a racist and a xenophobic moron. Anyone who fails to see it occurs in all religions and races seriously needs to take their blinkers off.

I will be mentioning real names of convicted criminals for sexual assault crimes, alive or dead – they are being named to substantiate my points, but also to highlight the issue that the far right consistently and incorrectly claim Muslims are the main offenders when it comes to sexual assaults and paedophilia.

Firstly, let’s talk about US Serial killers Ted Bundy and John Wayne Gacy. These murderers rose to notoriety for their crimes of sexually assaulting their victims and killing them. Both were white men of no religious persuasion. (Both eventually got their just desserts, when Bundy was electrocuted by the state and Gacy was sentenced to death by lethal injection.)

Then we turn to Fred and Rose West, killers on the UK side of the Atlantic. They raped and killed young females in their care, including members of their own family.

Again, both white and I couldn’t find any evidence to suggest that they were followers of any religion. (Fred West committed suicide in prison and Rose West is currently serving a life sentence for her crimes.)

All these evil figures were white, all carried out sexual assaults and all killed their victims. Do we see the Far Right mentioning these creatures? No we do not. The far right only publicise sex crimes and crimes against children when the perpetrators are Asian, Muslim or Black. They only discuss these obscene acts when it serves to push their biased agenda toward minority groups.

Even respected British institution the BBC has not escaped evil in its midst. Jimmy Saville was a notorious paedophile who used his fame to molest his victims and used his fame to cover his tracks. It was said that people were aware of his crimes, but nothing could be proven at the time. There was also supposition that he was part of a paedophile ring which included others who were employed by the BBC at the time.

Even Westminster had a paedophile ring, which was covered up at the highest level during that time. The exposure in Westminster was the reason I have lost all trust for political parties. I do not support any party as a result of the cover up of Westminster.

Prior to me writing this article, I carried out extensive research to make sure this piece is as accurate as possible. Several sources of information who kindly assisted me have asked me to keep their names confidential. I will respect this.

One source of information informed me:

“Many people from various religious and ethnic backgrounds have been caught. It was not all one sided, it’s very clear it [child abuse] is happening in every ethnic background. There isn’t an ethnic group where more child groomers have been caught than any other. Nor has there been a huge statistic for a person or persons, who identifies as religious being caught for child grooming.”

I have seen very few people on the far right refer to or quote these statistics. The truth is convieniently forgotten in favour of pushing a hate agenda to claim that the majority of sex crimes and cases of child abuse are the fault of Muslims or ethnic minority groups.

The statistics I have seen (publicly accessible information) show it is white prisoners who make up the highest number of convicted sexual offenders. These statistics do not take into account religion so it would be wrong to make assumptions based on the primary faith of the offenders. However the statistics do take into account ethnic groups, gender and type of offense so they help to establish a picture that contradicts the far right claims that the majority of child abuse is conducted by ‘Pakistani Muslim grooming gangs’

I would like to share three personal accounts – people I have known personally – who have been convicted for paedophilia related crimes. Three people I thoroughly despise as a result for what they did, three people I never want to see again. To protect their family and victims who are innocent, I will not be naming their names. But for peace of mind I will confirm that the first two are both behind bars and the third is banned from the teaching profession.

Person A: This man was a white male, a few years older than myself. We both went to the same school and lived in the same street. At the time, we were friends. We went over each other’s houses and played video games together. He was not a religious person and he didn’t have any personal religious beliefs.

He had an older brother and a younger brother. During my later years in school, I found out this person who I saw as a friend was… raping their youngest brother. It horrified me when I found out, I was disgusted I was friends with something so evil. I had never suspected that this person, whom I saw as a friend, would be capable of something as atrocious as this crime they were finally convicted for. They didn’t meet the profile of someone I would ever have suspected of being a paedophile.

Last I heard, the youngest brother was taken into care as a result of what their brother done to them. No doubt scarred for life by the trauma of the abuse he suffered.

Person B: This person I was never friends with. I just knew who she was. This one was so sickening I refused to believe it at first. This person was a scruffy cow with a face like a ferret. A benefit scrounger (as opposed to a genuine benefit claimant) who was simply too lazy to work.

She was convicted of child abuse. The worst of it being that her abuse was toward her own biological children. From what I read in the papers, she and her boyfriend were involved in making indecent images. The images involved were all Category A – the most serious category.

Person C: This person was my Science teacher in school. An individual in a position of trust and authority. They were caught having an inappropriate relationship with another student. They abused their position of trust to prey on a person of school age. Legal age or not, the teacher had a responsibility to ensure no kind of relationship should happen. They had a duty of care. In my eyes and the eyes of the law the teacher was nothing more than a sex offender. They lost their job and were banned from teaching as a result.

All three cases I have described included white people who were not of a religious character. Sexual assault and child grooming is happening in every religion and race. The far right won’t acknowledge this, but I sure as hell will.

If the far right want to try combat child grooming then fair enough, we need to recognise it is a problem and we need to do everything we can to combat it. I support this. What I do not support is the refusal to believe sexual abuse is a universal problem and not one related to a specific group or community.

The far right obsession with using sexual abuse to besmirch and smear the faith of Islam is exploiting innocent victims to further religious hatred and intolerance. Underpinning this is racism – the far right deny they are racists but their preoccupation with the crimes of young Asian men clearly indicates that this is a race issue.

Islam bears the brunt of most of the far right prejudice. But all the research I have done shows the far right are wrong about their claims saying Islam promotes rape and paedophilia. They take isolated verses from the Qur’an out of context to build up a disjointed argument but fail to take into account the most important source of reference they have access to – Muslims themselves. I have never met a practising Muslim who believes sex crime is endorsed by his/her faith.

The curve ball often thrown to those who point to the incidents of child abuse within Islam is the number of Catholic priests who have hit the headlines for their abuse of young boys. From 2001-2010, the Holy See (governing body of the Catholic church) had allegations which involved around 3,000 priests suspected of child sex abuse, the youngest children supposedly being only three years old. It is as ridiculous to use this example to suggest Christianity endorses sex crime as it is to point to the Rotherham and Rochdale grooming gangs as ‘evidence’ that Islam endorses sex crimes.

We cannot use the acts of the minority to make generalisations about the beliefs of the majority.

The truth is, rape, paedophilia, sex crimes are happening in all religions and ethnic groups. It happens to men, women and children. Equally Men, women and even children can be guilty of these crimes themselves. Until the far right accept sex crimes are not the responsibility of one group but every group we will never be able to effectively track and tackle such sickening crimes.

If there any abuse victims out there reading this, I hope you find the strength and courage to overcome the terrible things that have happened to you. Never be ashamed for what happened, if anyone tries to say it’s your fault – they’re wrong. You didn’t ask for it to happen, you didn’t deserve it and I hope you get the closure you need to overcome what happened and put it behind you. If you need support or help, there are organisations out there who devote their time to help you. I have linked some key support groups below.

Don’t be a victim and please don’t suffer in silence.