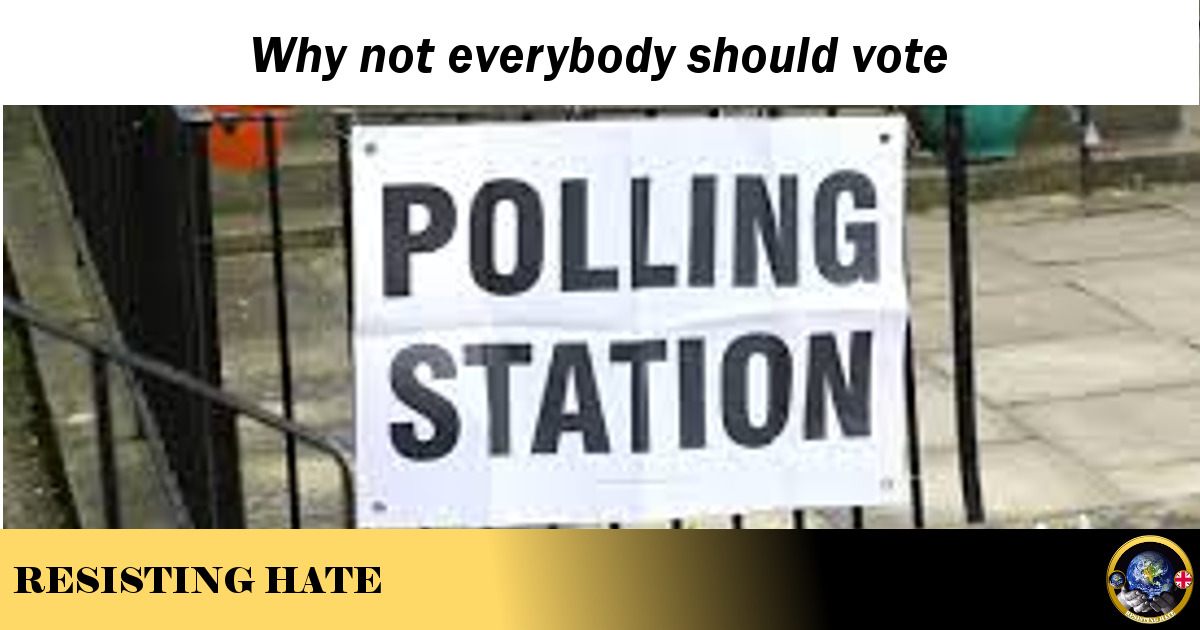 It has been my custom for several years to encourage people to use their vote at local and general elections. I have always believed that the right to express an opinion at the ballot box is the cornerstone of a working democracy and a responsibility that should be taken seriously. Voter apathy frustrated me and the message I always tried to put out was that it didn’t matter who you voted for as long as you were taking part in the democratic process.

In the post referendum political landscape my belief in the value of democracy has not changed but my views as to how democratic decisions should be reached have altered radically. As we approach the 2017 General Election I will no longer be encouraging people to vote, indeed I will be attempting to dissuade some people from actually doing so.

My primary concern is that a proportion of the electorate simply do not have enough political knowledge to express an informed choice in the ballot box. I remember being asked on the run up to the last General Election by a potential voter whether she should vote for “Labour, The Conservatives or the Tory Party…” Another friend on social media could name neither the leader of the Opposition nor the current Chancellor. In the week prior to the EU referendum I was asked repeatedly whether I thought Britain should “leave Europe.”

Ignorance is not the same as lack of intelligence. These are not stupid people, they are simply people who do not take an interest in politics and as a result have not sought out the information needed to make an informed vote. But I would argue that if you cannot find or make the time to gain a rudimentary understanding of the political parties and the policies they are promoting then casting a vote is irresponsible as it skews the outcome based on lack of facts and not informed opinion.

I don’t want it to sound like I am entirely blaming those people who remain politically unaware. The media should also shoulder some of the blame. The tabloids who publish sensationalist headlines encourage knee jerk reactions rather than views formed by research and reasoned opinion. Social media and the spread of suspect information is also having an impact. But the same point applies – if you cannot make the time to sift through this information and discern political fact from tabloid intrigue then you should be asking yourself honestly if you are in a position to do your vote justice.

I am concerned that in previous votes, particularly the EU referendum, we saw voters disproportionately prioritising some issues above others. Brexit came about on the back of the anti immigration agenda which was only one of a number of key issues that would affect Britain and the people of the country. Heavily prioritising one issue at the expense of considering a holistic picture of what impact the different parties will have on all the key political areas is dangerous. The NHS, the welfare state, foreign aid, nuclear armament, taxation, legislation and the environment (to name but a few) may be neglected in favour of a popularist vote based on a biased agenda.

I am deeply concerned at some of the ridiculous priorities that lie behind the motivation for some votes. You may have a right to vote on the basis of the colour of your passport but just because you can doesn’t mean you should. I was particularly alarmed at the priorities of one bright spark who told me (and I am being serious here) that she was voting to leave the EU because she was worried future EU regulation might limit the maximum power of hairdryers on sale.

I don’t have much patience for protest votes and spoiled ballot papers either. If you have bothered to make the time to attend the polling booth then in my view spoiling your paper is both a waste of your time and a two finger salute to the concept of democracy. If none of the parties work for you then campaign for change, start your own, stand as an Independent or write to your MP and tell them what changes you want to see. But don’t scribble the name of a dead gorilla on your ballot paper and congratulate yourself for challenging the system. Because you aren’t.

Under British democracy voting is a right. A lot of people will consider my view that not everybody should exercise this right as undemocratic and an affront to the people whom I am suggesting abstain. But I believe voting is not just a right it is also a responsibility. You do have the right to a vote but with that is also an implied obligation to understand what exactly it is you are voting for and why you are voting for it.

You have a responsibility to cast your vote based on an informed, considered opinion. In my view anybody unable or unwilling to do this should stay at home on polling day.

One thought on “Why Not Everybody Should Vote”