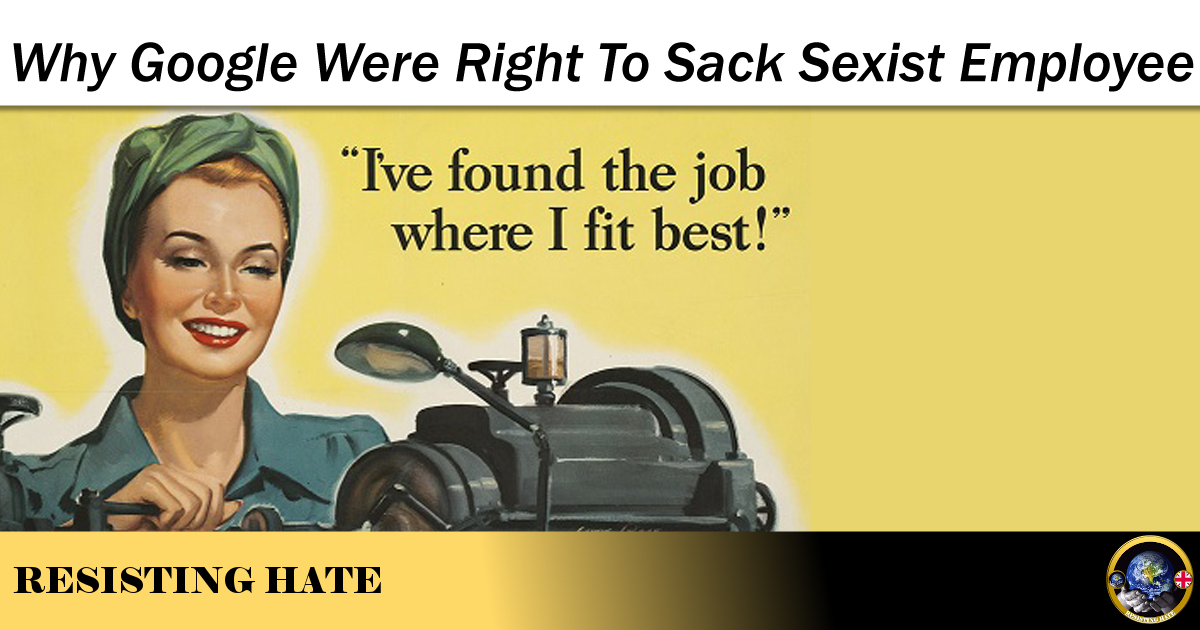 After the debacle of the leaked Google memo on diversity the individual responsible for sharing his somewhat sexist views to the rest of his company has now been dismissed. But the gender debate lingers on in his wake and continues to encourage people to discuss the issue of gender based abilities and predispositions.

In a nutshell our hapless Google employee made the suggestion that “the distribution of preferences and abilities of men and women differ in part due to biological causes and that these differences may explain why we don’t see equal representation of women in tech and leadership.”

It has been the natural reaction of many to express anger at these words and the view they put forward but it is important to understand why the Google employee was wrong and why Google did the right thing in terminating his employment.

The primary concern I have is that the employee was trying to use a stereotype to promote an argument. Stereotypes are problematic. They are a generalisation which means they are not safe to rely upon as evidence. You could for example tell me that men are stronger than women but if you did I would immediately go and find you ten women who can throw a shot put a decent distance and ten men who can barely lift a coffee cup. The generalisation achieves nothing but to create a false expectation of the sexes which can then be used as a foundation for targeted discrimination.

Gender generalisation may play a part in sociological theory but when taken into the workplace it opens the door to discriminating against anybody who does not conform to the rigidly defined behaviour of gender stereotypes.

When we allow this kind of blinkered thinking to enter the workplace it actually turns into a self-fulfilling prophecy. Fewer women are recruited into a given industry because of a false belief that said industry is a skill set better suited to men therefore fewer women apply. Fewer women undertake the education paths relevant to that industry which leads to the industry slowly becoming more and more male dominated. The erroneous assumption is then made that men enter the field because they are better suited to it – and so the vicious circle continues. The net result is that the industry is disadvantaged because of a much reduced talent pool, albeit an artificially constructed disadvantage which is, ironically, entirely of their own making.

Stereotyping is also dangerous because it reduces individuals to be no more than a product of type. This is essentially why sexism (and racism) are so offensive. It is the implication that an individual is not a unique being but a sum of the parts of what it is to be a woman/man/white person/person of colour etc. It denies the right of a person to be taken on their own merits.

The Google employee based his argument on the biological differences between men and women which is a limited view as it fails to take into account the ‘nurture’ aspects of personal development. Women have been conditioned throughout history to accept a subordinate role to men. This may be anathema to a progressive modern society but we need to remember that it was actually less than 100 years ago when women gained the right to vote in the UK. The weight of oppression still lies heavily on the shoulders of many and it is unsurprising that gender based social expectations still play a part in directing the educational and career aspirations of women. If there are more men than women in technology this cannot be blithely attributed to biology with no consideration for the social environment and the role it has played in shaping attitudes and expectations.

The leaked Google memo was anachronistic in the sense that it only recognised two genders. This polarisation leads to further discrimination – discrimination toward the transgender community, the non binary community and to any individual who does not wish to pigeon hole themselves into a single gender. We live in supposedly enlightened times where gender is (hopefully) becoming acknowledged as more complex than the mere possession of a penis or vagina. The rigid delineation expressed in the Google memo does not acknowledge this evolution of thought and regresses us back to the narrow definitions that no longer serve our society well.

It is important to remember why we hold the principle of diversity as aspirational in a progressive society. Diversity is not about being politically correct. Diversity is needed because it is a rational principle that works best for a society.  It promotes a genuine meritocracy where the best people for the job are hired to do the job. When we start to discriminate based on race, gender, faith etc. we effectively disadvantage ourselves and our own progress as a society. Objecting to diversity could not be a more irrational position to take.
Yes, Google sacked their sexist employee because he was offensively patronising and gained the company much unneeded negative publicity. But they also sacked him because, as any global corporation knows, the best way to grow and succeed is to recruit high calibre candidates. Anybody discouraging a whopping 50% of the potential Google talent pool is effectively wrecking corporate growth and future profits. It is hardly surprising they unceremoniously kicked his backside off the Google premises.