Inured as we all are to the lime light seeking idiocy spewed by Katie Hopkins with regard to any trending news topic, her comments in relation to sexual abuse toward women this month have hit a new low.

In the wake of the #MeToo campaign many brave women have come forward to tell their own personal stories about sexual harassment, sexual abuse, rape and sexist victimisation. These frank and honest accounts have helped educate the public at large as to the scale of the problem we still face with the abuse of women in our society.

This bravery has been met with the typical bull in a china shop belligerence by Hopkins (and others) who have spectacularly failed to grasp the point of the #MeToo campaign and who have derided the women courageous enough to take part as capitalising on their abuse to seek attention.

Hopkins goes on to imply that in some cases women have not been abused but have used sex as a bartering tool for personal gain.

However the comment that showed a particular lack of empathy and understanding toward this sensitive discussion was the tweet where Mrs Hopkins suggested women should ‘man up’ with the clear implication that if women behaved differently they would be less likely to suffer abuse. 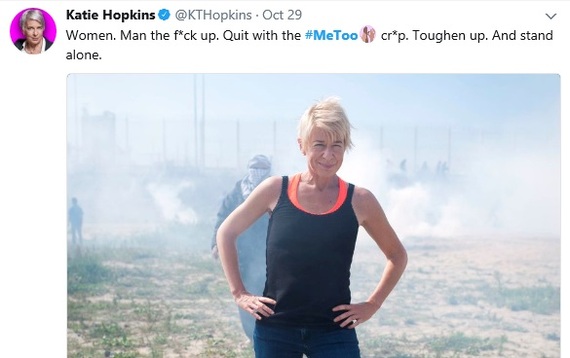 This is victim blaming at its worst. It is no different from claiming women who wear a mini skirt are asking for it. Our society has gradually evolved to understand that the blame of rape must always lie at the feet of the rapist and not the victim. Katie Hopkins seems hell bent on dragging us back fifty years into the past with her unhelpful and anachronistic attitude that with the right behaviours a woman can stop herself from being violated.

This negative attitude toward victims of sexual abuse was further perpetuated in the media by Anne Robinson who jumped on the band wagon to call modern women ‘fragile’ and commented: “In the early days, 40 years ago, there were very few of us women in power and I have to say we had a much more robust attitude to men behaving badly.”

This victim blaming attitude was further endorsed by Caroline Santos of UKIP who went further even than Hopkins and Robinson to suggest not only could women stop abuse if they want to, but some actively welcome it.

When women in the media speak out with such little understanding of the issues involved there is a very real danger that it will once again silence those women who did speak out and who did shine a light on the unacceptable behaviour of the small number of men who do use sex to try and obtain power over their female colleagues.

The fundamental mistake that Hopkins and co are making is to assume that women are all the same. They assume all women have the same levels of confidence that they do and that all women are able to fight off sexual harassment in the same way that they believe they would be.

But this is a very naïve point of view. Women differ greatly in their personal circumstances, their background and abilities. What one woman may find easy to shrug off may traumatise another. This is not because one of the women is weaker than the other but because one may have more emotional issues and trauma in their past.

Speaking personally I am extremely lucky in the fact that I have never been abused or raped, I have never had an abusive partner, I have never had personal or working relationships where my gender or sexuality have been exploited and I was fortunate enough to be brought up by parents who cared enough about me to instil me with the confidence to speak up if anything inappropriate was said or done to me. This is privilege. My confidence is not my achievement, I just got lucky.

Other women have not been so lucky. Other woman have suffered abuse, discrimination and sexual harassment. Other women have been so in fear for their jobs that they would endure unwanted attention for the sake of feeding their children.

What Hopkins doesn’t understand is that women do not all start off on a level playing field. There are those of us who would be confident enough to (in her words) “Toughen up and stand alone” but this is not because we are stronger or better in any way, it is because we have been luckier than others.

Hopkins and Robinson make a virtue of their confidence and their ability to stand up for themselves but these are powerful women in the public eye. They have no concept of the vulnerabilities of others.

I did see a flasher once and gave him a round of applause and marks out of ten which entirely killed the rather uninspiring erection he had. But I do not consider my confidence to be something to brag about. I have been fortunate, very fortunate. Many women are not. We must own our own privilege when we have not been subjected to the trials that others have. It is too easy to claim to be strong when you have never been tested.

The point of the #MeToo campaign was to give a voice to women who have been abused and to give them a platform where they can speak out. When people of our own gender like Hopkins and Robinson mock these women they are not just letting down the sisterhood they are undermining the whole principle that those who harm others should be held responsible for their actions.

Keep on speaking up with the #MeToo ladies. Your courage does you all credit.