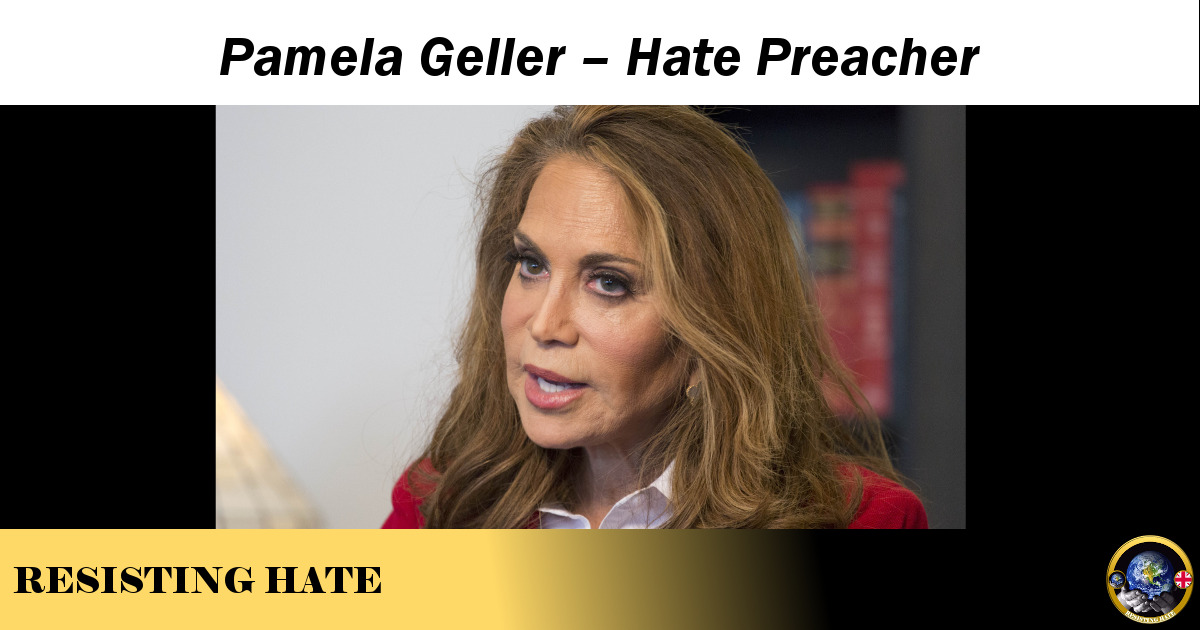 We have our fair share of unpleasant characters here in Britain, but Americans always like to be the biggest and best, so that’s why, if you want to find the real bigots, you have to cross the Atlantic. One of the most influential and disturbing of these characters is Pam Geller, who uses the old excuse of Free Speech to spread hatred and bigotry. A former journalist and publisher, she was influenced by the September 11th terrorist attacks and became a radical anti-Islam protester, or counter-Jihad, as she styles herself.

She is a supporter of the racist EDL, and was invited to speak at one of their rallies in London in 2013, but her entry into the uk was blocked by the government, along with her friend Robert Spencer (not to be confused with alt-right leader Richard Spencer).

Geller and Spencer co-founded a group called American Freedom Defense Initiative in 2010. AFDI seems to be yet another right wing money making sham. Articles and the homepage of their website cry out for donations, with a PayPal subscription option, though rather incongrously there is also an article detailing how Pamela’s PayPal account was suspended for supporting discrimination.

Following the Benghazi attack in Libya in 2012 Geller and AFDI purchased advertising in the New York subway system. Their campaign stated

The ads were initially rejected by the Metropolitan Transportation Authority. AFDI sued, and a judge ruled that the ad was protected speech under the First Amendment.

In 2015 AFDI organised an competition for cartoons of the prophet Mohammed in Garland, Texas. The event was criticised by none other than Donald Trump as being intended to deliberately provoke violence. Two men attacked the event and were killed by police.

Geller has recently published a book entitled Fatwa – Hunted In America, with a foreword written by none other than the repulsive Geert Wilders. She promotes this book heavily on her own website, again with plenty of pleas for cash.