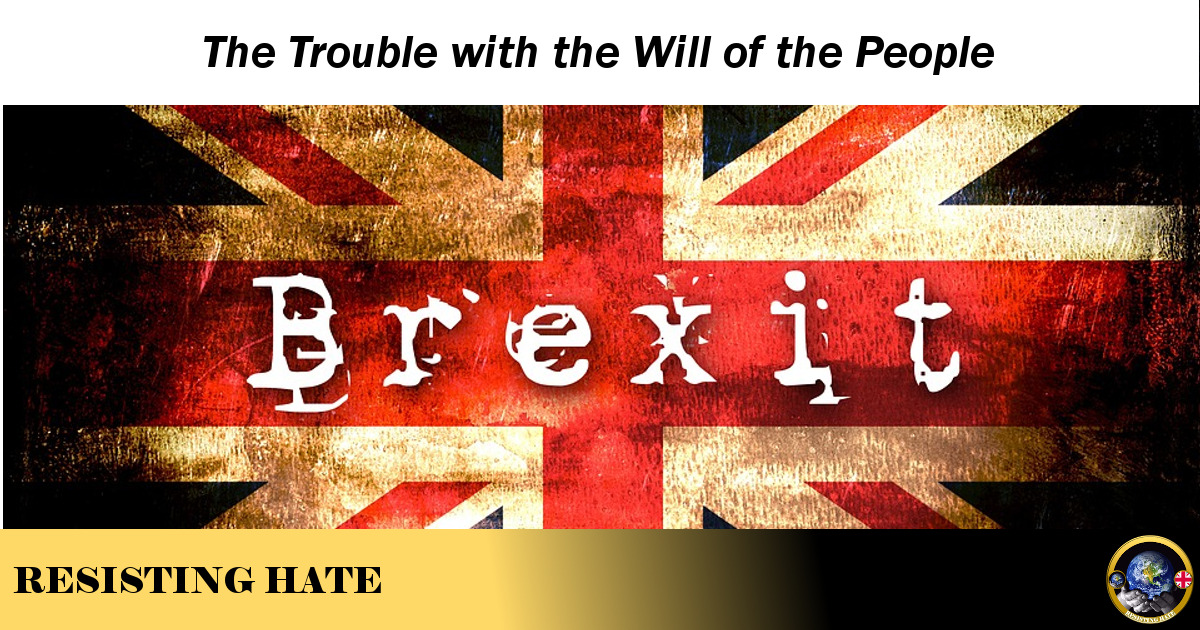 Possibly the most oft quoted catchphrase of the post Brexit referendum world is the statement ‘The Will of the People.’ It is hard to find a single article on the EU referendum that doesn’t make reference to the words that have become synonymous with the concept of democracy.

However when discussing democracy it is important to acknowledge that there are two definitions of the concept. In a Direct Democracy there is a focus on the people being directly consulted on matters pertaining to the state. In an Indirect Democracy decisions are taken by elected representatives of the people. The UK with a two tier Parliament comprised of an elected chamber and a chamber of peers is an Indirect Democracy. This definition gives every eligible individual a vote of equal worth to cast in favour of who they think will best represent them at Parliamentary level.

The problem with the EU referendum was the confusion it caused in relation as to how it would sit within an Indirect Democracy. As an advisory referendum it would seek to clarify public feeling which would help the elected representatives make an informed decision. As a binding referendum the people would vote directly to establish policy themselves. In the specific case of the EU referendum it was an advisory referendum. This meant that although it had value in establishing public opinion it had no legal status in itself. The will of the people would be a factor in decision making but not the final arbiter of judgement.

In the case of Brexit much has been written both fairly and unfairly about the motives and abilities of those voting in the EU referendum. Some of these points have been over generalised but there are five concerns that come out of this dialogue which certainly in my view strongly support why adopting ‘the will of the people’ as our governing principle of democracy puts us in a difficult position.

The referendum was at odds with our political system

Referendums do not work well in an Indirect Democracy. They confuse the role of the MPs we have elected to make policy for us and cause conflict between two competing concepts of democracy. The role of the will of the people in our democracy is to elect members of Parliament. In consulting the people directly on issues we are bypassing our own democratic system.

The EU referendum would have been less problematic if it had been clearer that the referendum was advisory and not binding. Due to the lack of clarity a good many people went to the polls believing that a majority verdict would result in binding legislation.

In a country where we are not regularly involved in the Parliamentary decision making process it is unsurprising that much of the electorate are not politically engaged. It may not be popular to say that there are many people in Britain who know very little of either our own political system or the wider political and economic considerations of leaving the EU bloc but it is also the truth. It is equally fair to say that as even our seasoned and experienced politicians seem completely confused as to the ramifications of Brexit, the man in the street cannot be expected to have more of a clue.

Members of all political parties and the media have shied away from criticising the knowledge of the electorate as they believe in doing so they will be perceived as being elitist and seen as implying that the opinions of the working man are less valid than his or her professional contemporaries. That would be justifiable criticism if they were crass enough to call the voters stupid but there is a clear difference between saying sections of the electorate are ignorant and saying sections of the electorate simply did not have enough understanding of political and economic conditions to understand the potential consequences of their vote.

I think we are all perhaps a little bored of the big red bus by now but it still serves to make the important point that misinformation was abundant in the weeks leading up to the referendum.

Some of this was due to media bias with most of the big newspapers having strong bias toward one of the campaign sides.

Downright lies and clever rhetoric helped create a situation where people were ticking boxes in the booths based on policies that would never manifest themselves.

I would argue that there is probably no worse time in modern history than this to be consulting the people about their opinions. We sit in a technological gap where information flows more freely than it ever has but we have not yet taken that next step to regulate and verify the information that is being so readily consumed. The hyperbole surrounding ‘Fake News’ may have gathered momentum with its loudest (and orangeist) critic tweeting on the matter but as seen in a 2016 Pew Research study 62% of people get their news via social media. Although action is now being taken to ensure veracity, back in June 2016 there was little governance relating to what could be published and termed news. The ‘will of the people’ only has value if it is a will established through giving the electorate the true facts prior to asking them to form an opinion.

Some voters were influenced by social bias and cultural pressure

In a similar way that news entering a FB or Twitter feed cannot be confirmed to be truth it can also not be confirmed to be unbiased. Think tank Demos published a study of how social media channels essentially become an echo chamber where an individual’s political convictions are further strengthened by the fact that all the information they receive reinforces their initial belief. Culturally people are more likely to seek out and friend those who will share their views and who are likely to share similar material that will support those views. The algorithms that drive social media are also programmed to identify what material a user finds interesting and provide more of the same of it.

It is not derogatory to question the impartiality of an electorate who are only exposed to information that reinforces rather than challenges their preconceptions.

Some individuals had an agenda of prejudice

It would be ridiculous to assume that every one of the seventeen million people voting Leave were racists or xenophobes and any Remainers who push this view do the rest of us no favours.

However it is certainly fair to say that the Leave campaign was hijacked by a minority of those who want to push a divisive agenda in the country. The Leave voters were not all politically far right inclined but it could be argued that there were enough right wing Nationalists voting to swing the balance in favour of the EU exit. The concern here is that in a referendum some people may be swayed to act irrationally (in the academic sense of the word – broadly speaking to act against their own economic interests) in favour of supporting ideological principles or, in the case of Brexit, an agenda of prejudice.

Anybody questioning the validity of the will of the people has experienced a backlash pointing out that in a democracy all votes are equal and every individual has the right to a vote. However what is often overlooked is the fact that along with the right to vote comes the implied responsibility to understand what you are voting for. Agreed that in our political system every vote carries equal weight. But not every vote has equal worth. Ignorance is not equal to informed opinion. If people vote based on misinformation, lies or prejudice and with only poor or biased information upon which to base their opinion then chances are the outcome of that vote will not reflect the best outcome for the people voting.

‘The will of the people’ may sound democratic but it is not always a democracy that will work best for the people.