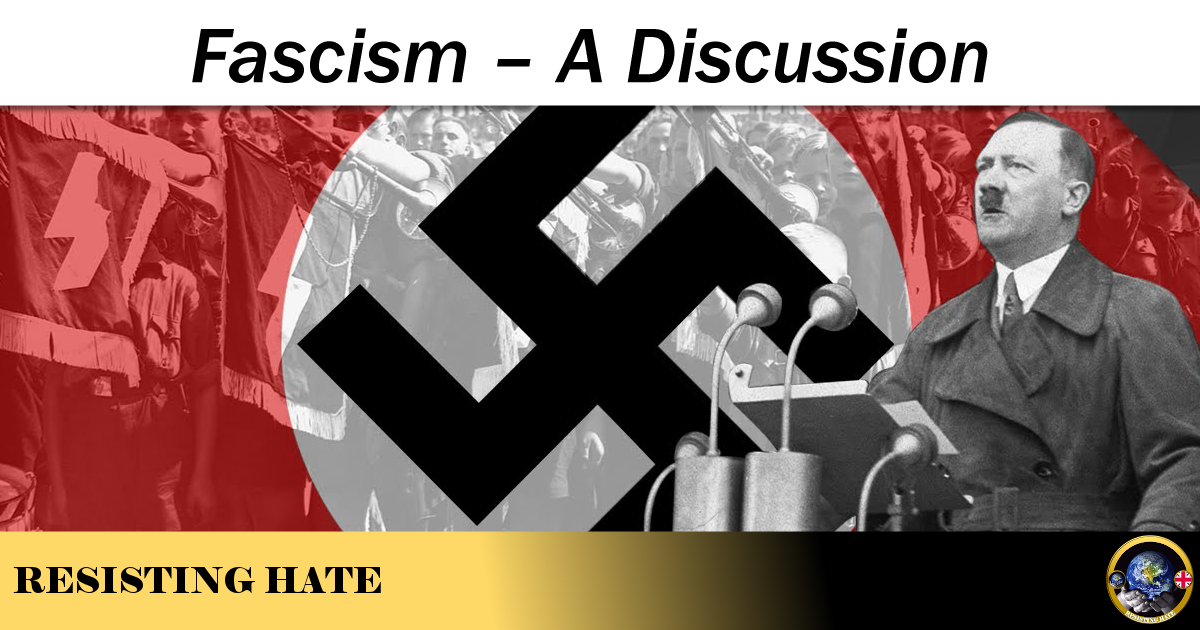 When people think of fascism, thoughts often turn to militarism and the associated iconography of Nazism; the black swastika on a white disc in a blood-red flag; the eagle grasping a wreathed swastika; runic letters that speak of ancient cultural roots. For others it is the holocaust; the murder and suffering of the Jews and before the Jews, the gypsies and Roma, homosexuals, Socialists and Trades Unionists. Fewer people think of or are even aware of the T4 programme – the post war designation of a programme initiated very soon after the Nazis came to power in 1933.

In 1935 Hitler announced at the Nuremberg Nazi Party to the Reich Medical Leader Gerhard Wagner that he should aim to “eliminate the incurably insane”, at the latest, in the event of a future war. Two important caveats need to be understood about this message presented during the most prestigious event in the Nazi political calendar: It should be understood that this was spoken at a time Germany was re-arming and preparing for what most considered would be an inevitable future war to enable Germany to re-establish its “natural” place as a leading European and world power.

The bureaucracy of Nazi Germany was, from the beginning of Hitler’s accession, something of a shambles. This stemmed in part from the chaotic state of German politics when Hitler came to power and partly from the particularly amateur approach Hitler took to Government. Hitler’s obsession with the triumph of the will resulted in a tendency to neglect detail. Disinterested in how things were achieved, Hitler allowed the various arms of Government to fight between themselves for influence and favour. This led to a system of bureaucracy in which all sought to “strive toward the will of the Fuhrer”. So, when Hitler suggested that the incurably insane should be murdered, that is precisely what happened. Families were encouraged at first to agree voluntarily to the death of their disabled children. In 1939 as war loomed; the sham of voluntarism was abandoned. In all, an estimated 70,273 lost their lives.

When reflecting on the horrors of Nazism the common refrain has been: “Never Again”. Never again what exactly? What should we never again tolerate to allow to happen? What will we – should we- do about it if we see it happening? How will we know if it is happening? Look at any everyday object close up and it can appear very different. Pages of a book appear like the threads of a thick woollen carpet; lipstick, lined and scarred like the surface of a strange, rocky planet. What happens when you look at fascism close up? And how does it look differently from a distance? When we look at fascism through the prism of history we see clear, concrete images: the iconography of Hitler and Mussolini modelled on that of Rome; the burning and looting of property at Kristallnacht; arms waving, hands grasping the bars of cattle-trucks; starving semi-naked concentration camp survivors like mournful skeletons; piles of bodies lying motionless in mass graves. Such are the signs of depravity of fascism run rampant. Such signs are easy to spot. But what did the Weimar look like before Hitler’s accession to Chancellorship in 1933? What did Nazism (as a particular and unique brand of fascism) look like to middle-class Germans?

The party that Anton Drexler founded in 1919 grew from a paramilitary group whose primary focus was to combat the rise of Socialism within Germany. To attract the middle-class vote and distinguish the party from the Socialists Drexler was keen to advocate for the growth of profit-sharing companies for a unified, Aryan “people’s community” as distinct from a community divided along class lines. Hitler’s accession to the position of Fuhrer in 1921 gave the party a more focused, anti-Semitic zeal. Economic collapse and political confusion characterised German politics between the wars. National Socialists and Socialists fought in the streets. While Socialists spoke to the German working class of economic conditions, Hitler promised a solution people were willing to believe in: to make Germany “Great Again” (a refrain we hear in today’s economic maelstrom). The Munich Post is chronicled as having exposed Hitler and the Nazis as their popularity rose in Germany. Hitler labelled the newspaper The Poison Kitchen and the Nazi party took a number of libel actions against its reporting of what was presented not so much as a dangerous ideology (here we have echoes with the way in which Trump is often perceived) as a party of gangsters and racketeers. (As early as 1920, the Nazis raised money by selling tobacco).

Hitler was right to fear the power of the press. In 1931 The Munich Post was the first to allege secret plans for what it termed The Final Solution (Endlösung). When in 1929 Goebbels acceded as head of propaganda for the Nazi party his approach was simple and extremely successful: basic slogans (tropes) were employed to repeatedly underscore stark, unsophisticated messages to win public support. As might be expected of the far right, such tropes focused on traditional values underpinned with references to enemies within and without. “The Jews are our misfortune” “National Socialism: The Organized Will of the Nation.” In his address at the Nuremberg trials Goering put it this way: “The common people do not want war (but) all you have to do is tell them they are being attacked, and denounce the pacifists for lack of patriotism and exposing the Country to danger.”

When the Nazis came to power, the focus was on a relatively new media used to incrementally undermine established institutions; to prepare the German people to accept dictatorship, through the continual presentation of enemies within; enemies that would ultimately be the focus of elimination. This new media arose in competition with the power of the printed word; a media more easily accessible, requiring less effort than the written word to inculcate basic messages; a media at once more immediate and more persuasive than print: radio. Much has been said about Trump’s battle with the media and how in this battle he denigrates the media as libellous or “fake” and how he presents his version of reality though a new media outlet, one which circumvents that of the traditional route, of mainstream media. As I write I have just come away from Twitter. On one account (not one I follow) was a news article. The Headline: “Muslim Rapes 8 year old Girl, 6 Years later she Gives Him Gruesome Payback” The article tells of the revenge attack of a 14 year old girl who had waited 8 years following his rape of her, until one day she sought her revenge by plunging a knife through his heart. What a story! Why is this not on the front pages of the tabloids? Two pictures inserted: a snarling Asian middle aged man taking out his bin; a blood-spattered step where apparently, his heart was punctured. The tale has it all: sex, violence, revenge delivered in the most palatable way- cold. And Muslims. The story feeds into all of the horrific stereotypes with which the internet (and Twitter) has been awash since Rotherham. Such stories are constantly regurgitated or referenced and distorted by right-wing media outlets. But despite all of this (or indeed, because of it), why is such a story not yet a front page headline of The Daily Mail?

Part of the narrative of the far right is that the mainstream media is run by a liberal left elite who tolerate and excuse any atrocity in the name of failed socialist ideology and policy. Here there is an interesting conflation of two culpable ideologies. When the focus is on policies that “ruin the culture” or are “ruining the country” (ask any fascist what is meant by either of these terms and they run for the hills) they appear to be socialist policies aided and abetted by permissive “liberal” values, which have facilitated their demise. Thus in its conflation its two enemies and with this distorted logic the populist right seeks to set itself up as offering a way out of this apparent “moral decline” represented most vividly by the myth of the “Muslim paedophile.

It is precisely this moral decline, and the answer to it, which this story mythologises. And a brief deconstruction of this story helps us reveal the truth of this mythology. The article is distributed by Mad World News (6th April 20 2016). They describe themselves as: “The Voice of Reason in an Insane World”. Their mission: To bring you the truth and the stories that the mainstream media ignores. “Together we can restore our constitutional republic to what the founding fathers envisioned and fight back against the liberal media.” The article was retweeted in March 2017 (such is the life-span of such sensationalist stories on Twitter) by an account whose biographical strapline includes the new right-wing doublespeak trope “truth-seeker”. The photographs depict one Zabhulla Boota, aged 56. The first paragraph begins: “A 50 year old Muslim man evaded jail time with only community service after abusing an 8 year old girl”. Embedded is a link to the purported source: “Sharia Unveiled”. Sharia Unveiled use the sentence above as its headline. We are offered the image of a very sad-looking blonde eight year old white girl with a gag across her mouth that reads: “help me”. Sharia Unveiled provides a further link, this time to the original source. The Telegraph and Argus indicates Zabhullah Boota was found guilty of sexual assault in 2010. For his conviction he received a community order and was allowed to return to his Bradford home in the neighbourhood where his victim lived. There is no indication of religious conviction. There is no indication of cultural heritage.

The name Boota is in fact a common Sikh name. Boota Singh is well known for his tragic love story with a Muslim girl he rescued during the communal riots in the time of the partition of India in 1947. Such nuances are not the stuff of right wing media. The image of a gagged, blonde white girl offered to the world by Sharia Unveiled feeds directly into a narrative that includes a common right wing trope: Muslim paedophile; but if such a construction (commonplace as it is) wasn’t hideous enough, we have another, far more sinister trope entering the lexicon: violent revenge. In this construction of the revenge-myth we have an example of how to respond to the barbarous Muslim paedophile on our streets who “rape our children.” The message is simple (and for many, all too effective). Our children are showing us the solution to this plague with which we are cursed.

In reality the victim is of Romanian heritage – but this misconstruction presented by Sharia Unveiled is the myth of heroic white revenge, served cold. This is fascism close up. Here, with disregard for the facts, a story is offered with thinly presented (all-too easily deconstructed) sophistication. This is how fascism stabs truth, and indeed us all, through the heart. This propensity to regurgitate denigrating tropes to incite fear and loathing; to propagate the mythology of the revenge tragedy and the celebration of the courage of a young white child-victim whose experience we are meant to engage with and whose courageous violent response we are meant to celebrate and perhaps, emulate.

This is Fascism in the “Alternative Media”. It is rampant and it threatens us all.