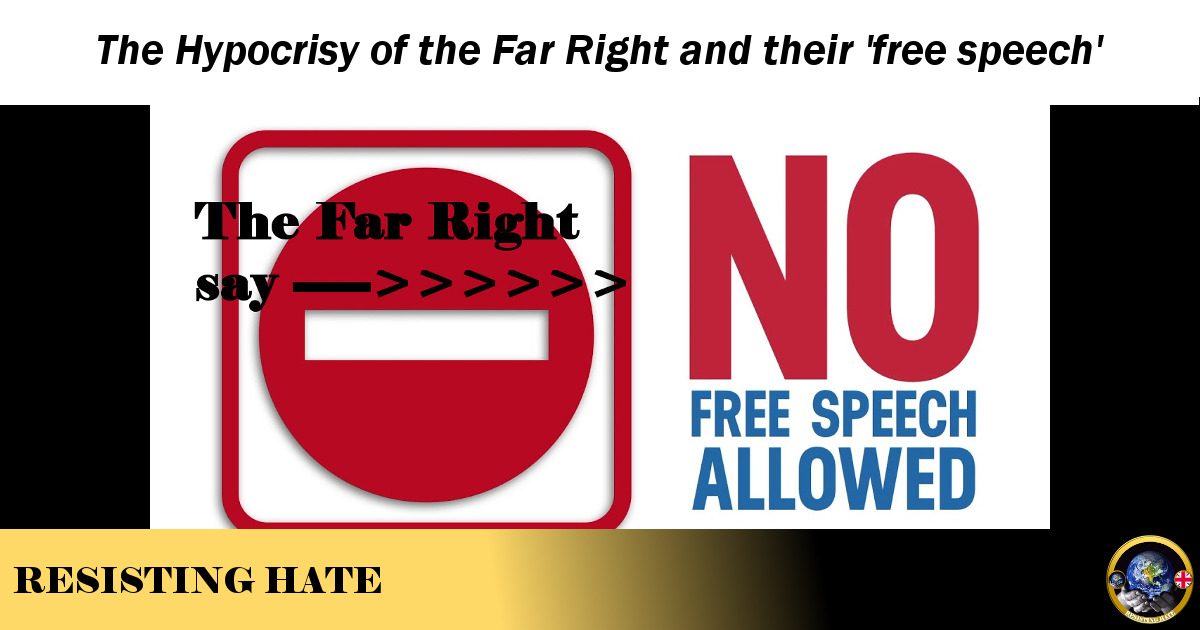 This week has given Resisting Hate the best publicity we have ever had. But publicity comes with a price and that price has been practically every single hate group in the UK trying to get our social media network deleted.

The far right claim to favour free speech. It is the cornerstone of their philosophy. The right to speak, the right to make their voices heard and the right to a platform. There was an outcry when Resisting Hate finally got Tommy Robinson suspended on Twitter and a further outcry when the silly man got himself suspended on PayPal, Instagram and Facebook.

Robinson’s followers were outraged that their ‘heroic’ little gnome had been denied a platform from which to radicalise others into anti Islam hatred. In fact they had marches about it, along with demos and petitions. (And tears…a lot of tears…)

However it would appear that the far right’s passion for freedom of speech only applies to those who share the same views that they do. Indeed, when those views are vociferously opposed, the far right abandon all pretence to free speech and do their absolute damndest to silence those who oppose them.

Resisting Hate are not hypocrites. I have spoken on numerous occasions about the fact that hate speech is not free speech and that our group do believe in censoring hate before it can indoctrinate and radicalise vulnerable people into adopting dangerous views. Does anyone really believe that murderers like Darren Osbourne and Thomas Mair would have been as easy to radicalise into violence if it were not for the likes of Tommy Robinson, Britain First, For Britain, Gerard Batten, Katie Hopkins and co telling them that it is perfectly acceptable to despise Muslims and to target politicians who make a stand against anti Muslim hatred?

This last week we have seen every idiotic high profile hater in the country (Looking particularly at you Lee Scheres, James Goddard, Vinnie Sullivan) and of course Robinson himself ordering their sheep like followers to mass report Resisting Hate.

No thought for the work we have done, the people we have helped, the communities we have supported and no thought at all for the right to free speech that you claim is so important. The hypocrisy is breathtaking. You bigots are no more committed to free speech than I am. Your focus is on serving your own self interests, persuading your naïve followers to fund you into more and more extremist hate and silencing anyone with the balls to stand up to you.

But you will not succeed in silencing Resisting Hate. We are dependent on no single platform and many of our pages and accounts are unbranded. We have extensive contacts on both sides of the Atlantic and fingers in more pies than I’ve had pies to eat (and as we all know, that is a hell of a lot of pies).

You know precisely what we want you to know and no more.

However we have moles in all of your petty little hypocritic mass reporting private groups. Remember that.

I’m publishing a selection of the attempts to silence Resisting Hate here. In order to keep our undercover acc anonymous this is primarily the public stuff. But it gives a clear indication just how hypocritical the people who howl for Robinson’s right for free speech are.

The far right don’t give a toss about free speech. They are fighting for the right to hate speech. Remember that.