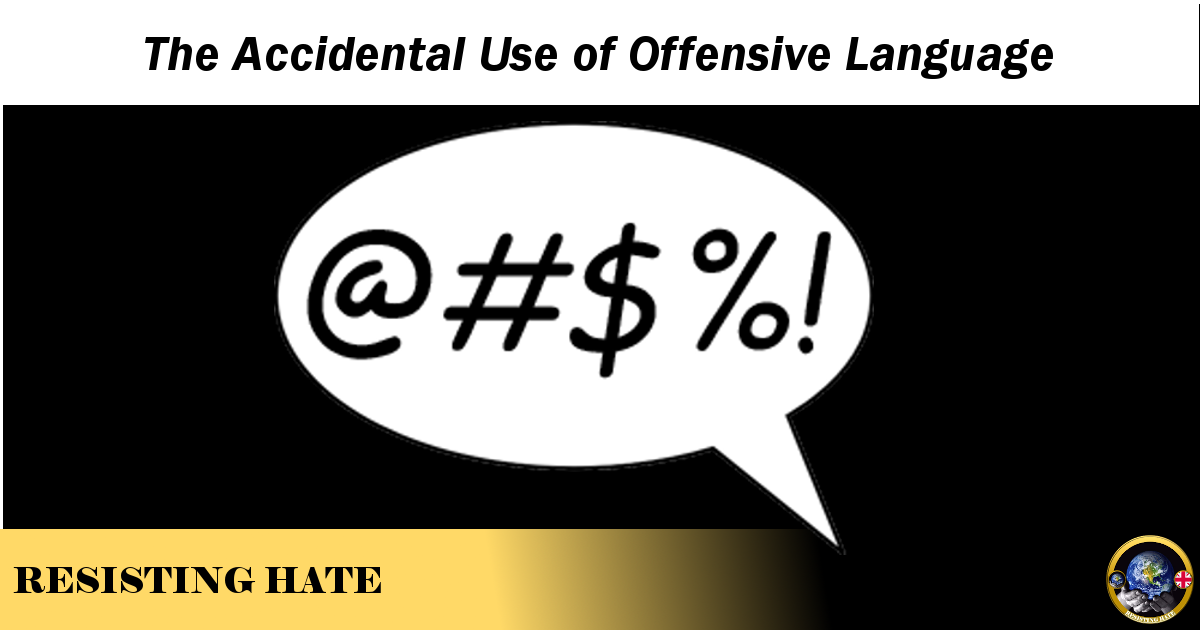 There have been three incidents recently that got me digging deeper into the etymology of some of the common words we use without considering the meaning.

The first was in a tweet on Twitter where I used the term “fuzzy wuzzy” to describe somebody’s feelings. I was thinking cute fluffy bears. It turns out that in modern usage the term is actually an offensive slur for Black people, highlighting stereotypical hair features in a racist manner. The fash were delighted at my slip up, my friends laughed but I was genuinely mortified!

In the second incident I was at home with my dog and had just had an interesting new ‘messy bun’ hair thing delivered from Amazon. I was waving it at my dog, offering to: “wave my wigger if you wag your wagger (his tail)” when my housemate looked at me in horror and told me that I’d just been very accidentally racist indeed! Apparently a “Wigger” is an offensive term for white people who attempt to culturally appropriate cultural behaviours attributed to black people.

The third incident (fortunately) doesn’t relate to me making another accidentally racist faux pas. It relates to a question I get asked a lot by the far right. Why is the word ‘Brit’ not offensive but the ‘P’ word is. They asked why, if the P word is a contraction of the word ‘Pakistani’ is it considered racist while the word ‘Brit’ is not?

The reason for this is that language changes. The word ‘Brit’ has never been used as a slur, a stereotype or a method of abusing and vilifying others. The ‘P’ word has a long history of being employed as a racial slur and in more modern usage it has picked up further undercurrents of Islamophobic hate. When we use the ‘P’ word we do not use the word in isolation, we use it with full knowledge of its history and all the connotations associated with it. We know it is offensive therefore when we use it there is an implication that we intend to be offensive. There may well have been a time when the ‘P’ word was not offensive but words evolve and change meaning. The onus is on the user to understand not just the word itself but the nuances associated with the word.

All this got me thinking about what other words we all use on a regular basis without realising they may have offensive overtones. I did some research and found that a lot of words and phrases that we all employ in everyday language are potentially very problematic

Sold down the River

This phrase originated in America and relates to the practise of selling slaves and transporting them to their new owner via the river.

The word ‘ghetto’ originated in Italy and has anti-Semitic origins as it was used to describe an area of Venice where the Jewish population were resident. The word evolved to relate to heavily populated areas of any city, particularly those with a large minority community.

This Greek word comes from the Greek for ‘womb’. It is offensive because the word echoes the long discarded belief that women are more susceptible to out of control emotions due to their biology. So use of the term is actually rather sexist.

While anyone can be considered ‘uppity’ the phrase has racial connotations as it was first used to refer to black people who were perceived to condemn black people who (quite rightly!) refused to view themselves as inferior to white people. This word is often followed by the ‘N’ word which very few people would not understand to be a gratuitously racist insult.

This is an interesting one because in light of the brevity of language favoured in modern conversation (due to text messaging and social media) this kind of phrasing is becoming more acceptable. However the origins relate to non native speakers of English and was intended to mock the non standard syntax.

This one is said to link to the African God named Maamajomboo. Employing the word could be seen as mockery of African culture and cultural practises.

This term was first used during World War I to describe a person who had lost all four limbs in battle.

There is some disagreement on this term but one popular school of thought is that it dates back to a law (thankfully long since repealed) where a man was legally entitled to beat his wife, providing he used a stick no thicker than his thumb!

This is a relatively modern term which refers to a tragedy of mass suicide carried out on the orders of cult leader Jim Jones. The phrase relates to blindly following direction without questioning it.

Cat got your tongue

This has nothing to do with pussy cats! It relates to discipline on the seas and the Cat-o’-nine-tails whip used on dissenting sailors. The whip caused so much pain that the victim was struck silent by the agony.

This is one that Nigel Farage could have done with researching. Tipping point in scientific terms is the point at which something cannot be stopped (Think Global warming, there will come a point when the heart heats up so much that no amount of human intervention will be able to stop it overheating and turning into a second Venus). However the term was actually coined as a reaction to community areas and the point at which white people would start to move out as the African American population increased.

This phrase has undergone two separate cultural shifts. The phrase was coined in the Sci fi film The Matrix. Taking the red pill opens the eyes of the protagonist to all the truths of the world. It came into common usage with people saying they had been ‘red pilled’ into rejecting lies told to them by mainstream media and governments. However the word has been adopted by the far right and Neo Nazi communities now. It can be used to refer either to what they call ‘The Jewish question’ (which is deeply anti-Semitic) or it can be used to refer to the fallacious concept that white people are becoming a minority race.

This is used as a perjorative for any given situation where negativity needs to be expressed. However the word was first used in relation to disabilities, particularly disabilities that impeded the ability of either humans or animals to walk.

When we say we are getting down to the ‘nitty gritty’ we usually mean we are looking for the fine details. But the original meaning was actually a reference to the detritus at the bottom of slave ships.

A bit of Googling suggests that this popular celebratory call actually links to the Hep Hep Riots in Germany in the 19th century. The call of “hep hep” as Jews were removed from their homes were based on a traditional German call used for gathering sheep but took on a more sinister and anti-Semitic purpose during the riots.

Grandfathering in usually relates to getting benefits of earlier subscribers. A person might for example be grandfathered into a final salary pension scheme. However the phrase came into being in America where voting was opened up to people who had a grandpa who voted before 1867. This largely excluded the Black community so was an intentionally racist act.

The Master bedroom may be a popular term on estate agent websites but the idea of a bedroom where the ‘Master’ slept dates back to colonial times. The whole concept of Master/Slave is racist to its roots

Colloquially a ‘cakewalk’ is an easy challenge. But it actually originated as a dance performed by black slaves to entertain their white ‘masters’. Performers who pleased their audience were rewarded with cake.

So language really is a minefield. Words are constantly evolving. What was fine to say yesterday may well not be fine to say today or tomorrow. Terms like being ‘blackballed’ which have negative overtones are already out of common use as are words like ‘blackboard’. Language changes. And keeping up with it is a challenge for our times!

2 thoughts on “The Accidental Use of Offensive Language”