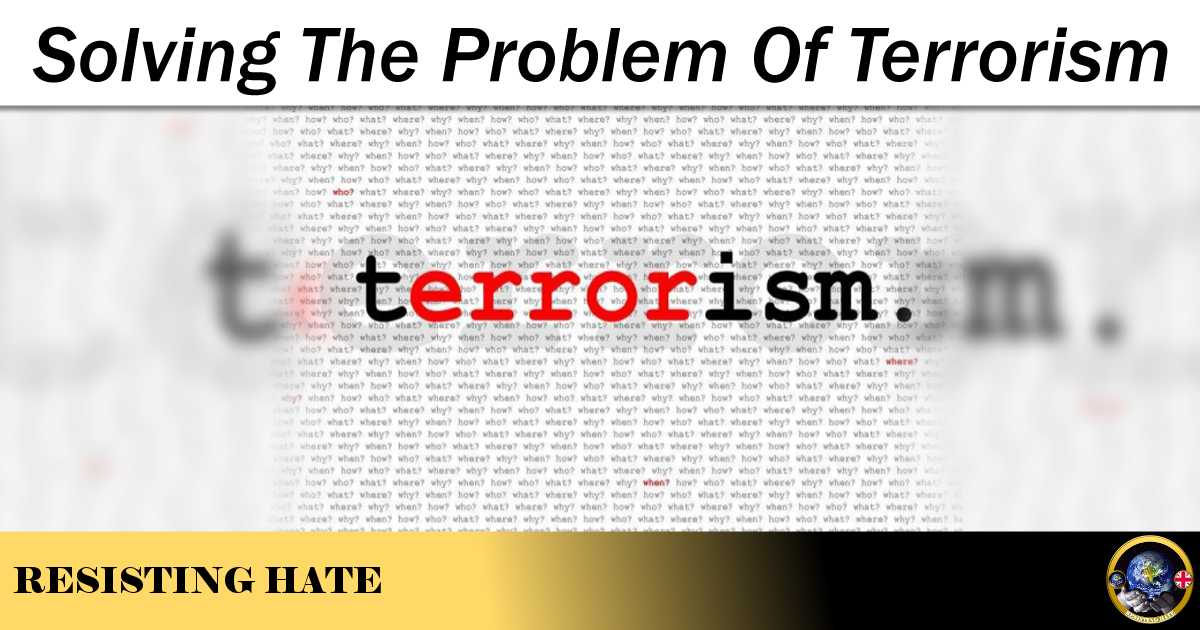 If you clicked on this article hoping for a pithy Hopkinseqsue one liner that claims to solve the problem of terrorism in a soundbite then I am afraid you are out of luck. Terrorism in the modern age is more complex than a few buzz words can easily express. Activists, newspapers and politicians may try to sell the idea of a simple solution but the truth is that terrorism represents the evil in human nature and there is no simple solution to human nature.

The difficulty with constructing a defence to terrorism is that the enemy is not a tangible united force. It is a fragmented and dissipated threat that springs up in individuals inspired by extremist ideologies. These ideologies can be a perversion of a legitimate faith (think ISIS and Islam) or they can be a corruption of a political ideology (Think the right wing and White Supremacy). The problem is that the individuals who develop views extreme enough to manifest themselves in evil acts of terrorism are not indicative of the ideologies themselves. Therefore it is too simplistic to blame any ideology for the individuals who commit hate in its name and, as a consequence of this, it is extremely difficult to predict where the next act of terrorism will arise from.

We may not have the answer to stop terrorism yet but what we do have is a lot of failed suggestions as to how it should be dealt with. Nigel Farage was in favour of closing the country’s borders to migrants: “Frankly, if you open your door to uncontrolled immigration from Middle Eastern countries, you are inviting in terrorism.” Yet this solution holds no water as the majority of terrorist attacks on both UK and US soil have been from citizens of those countries and not immigrants. If our terrorists are home grown it would seem futile to try and resolve the problem of terrorism with tighter immigration laws.

Ex EDL leader Tommy Robinson wants to resolve the problem of terrorism by deporting Muslims “Deport all the Muslims who want Sharia law and the problem would be solved overnight.”

But terror is not a Muslim problem, terror is a hate problem. Thomas Mair who savagely murdered MP Jo Cox was not a Muslim, Joseph Christian who fatally stabbed two men on a train in America was not a Muslim. The likes of Robinson want you to believe the problem is as simple as blaming all Muslims because, if you do believe that, you will buy into the simplistic rhetoric of his solution. A solution that will cause divisions in society, break families and communities apart and will do nothing toward making our streets a safer place.

UKIP have offered an equally ludicrous solution to the problem of terrorism. Prior to failing to secure a single seat at the General Election Paul Nuttall, then leader of UKIP was suggesting that we consider internment and tagging.The echoes of fascism ring loudly in the memory as we recall with discomfort who last proposed such extreme measures and the evil that such methods of inhumanity resulted in.

The trouble is that there is no fail safe method for predicting who will commit an act of terrorism. We can rely on police and government intelligence to a certain extent but this is by no means fool proof. Listening to members of communities, friends and families who might be in a better position to identify a radicalised or extremist individual is also of some value but it is inevitable that some people will slip through the net. How many times have we witnessed an act of terrorist atrocity for those close to the terrorist to be genuinely shocked that someone they knew and were close to could be capable of performing such an act of evil? Predicting human behaviour is not an accurate science.

If we cannot predict who will commit an act of terrorism we cannot prevent them from doing it. We cannot imprison people simply because we believe they might commit a crime. The British legal system is founded on the principle of actus reus, namely that without a crime there can be no culpability. The right wing shout about Orwell’s 1984 and the perceived eroded rights of the people but imprisoning people for a crime they may commit… that really is Orwell’s thought crime. It just isn’t a solution.

The only way to eradicate terrorism from our society is to create an environment where hate cannot survive. Terrorism borne from any ideology is based upon the isolation and segregation of people from the mainstream (in the majority of cases young men). By integrating our societies and respecting the rights of others to hold political and religious views that differ to our own we kill off the noxious weeds of hate before they start to flourish. Those seeking to radicalise our young people will find it a good deal harder if, as a country, we are offering our young people a positive future based on respecting them and the contribution we want them to make to our society.

Some of preventing terrorism starts with politics. It starts with giving people the right economic conditions to believe they have a future. But it also starts with our attitudes, ridding ourselves of the preconceptions and prejudices that cause people to become isolated and easily picked off by those who would seek to turn their nihilism into hate.

Those of you call for deportation, vigilante violence and (in the case of some real idiots) genocide are playing right into the hands of ISIS and the like. You are creating the perfect conditions for hate. You bay for blood and howl at the moon for a solution to terrorism without realising that not only have you nothing to offer to make our country a safer place, you are actually part of the problem.