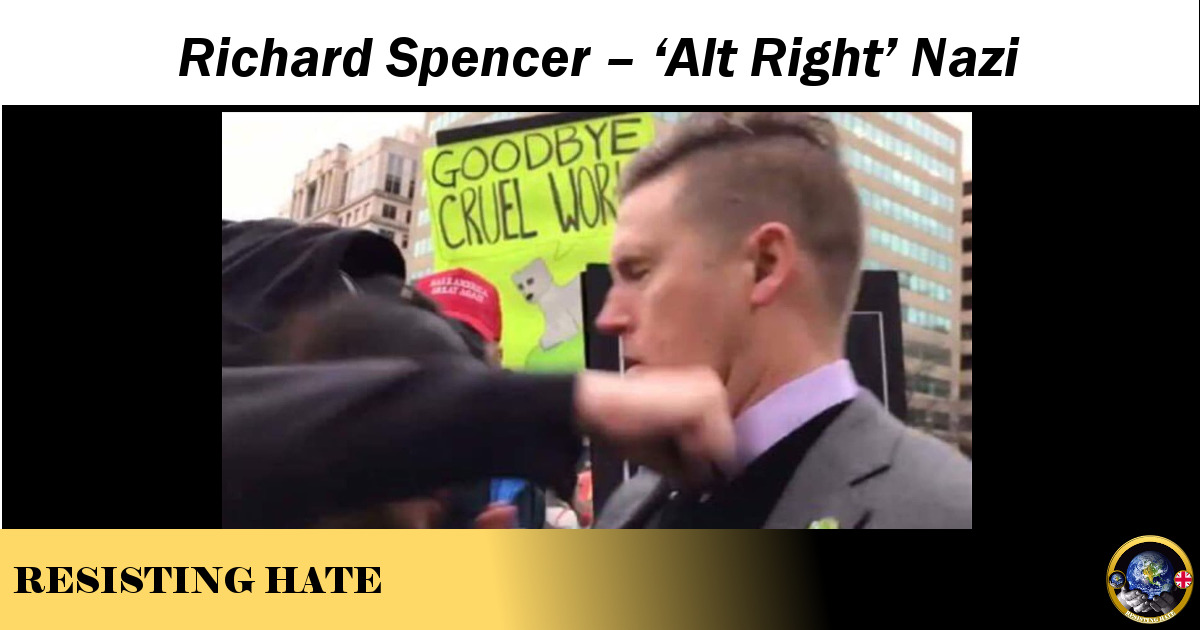 Richard Spencer was relatively unknown prior to Trump’s inauguration, when he got very publicly punched while trying to explain why he was wearing a Pepe the Frog pin on his jacket. The video of the punch went viral shortly after it happened, with many people feeling that in this specific instance the violence was justified. Seeing Spencer get his comeuppance highlighted the “social risk” of being a Nazi and many hoped that as a result haters would think twice before publicly affirming an allegiance to the far right.

Many right wing leaders tend to be sacked from professional roles when their views become too extreme. In Spencer’s case, he was sacked in 2008 from The American Conservative, a magazine which is opposed to left wing ideologies.

Spencer’s sacking came from his promotion of fascist Nazi doctrine including:

1. The creation of a homeland for the White race and discussion as to whether this racist objective could be achieved in the USA.

2. The belief that there should be a period of “peaceful” ethnic cleansing which will preserve the culture in Europe. (It must be noted that although Spencer continually says that he wants it to be “peaceful”, a large number of his followers advocate ethnic cleansing by non-peaceful means).

It is claimed by Spencer and a few other right wing people in his group that he coined the Alt-Right to describe the people who don’t wish to follow mainstream Conservative ideals but prefer more radical White Nationalism. I have not been able to find anything to validate that the term Alt Right did originate with Spencer and have only encountered non-verifiable claims online, including his own website AlternativeRight.com.

At the same time as starting work on WSP, Spencer became president and director of The National Policy Institute (NPI). As a savvy reader might expect, the NPI is a group which promotes a White Suprematist viewpoint. It has been in place since 2005 and has a long (and not very distinguished) list of members. Having personally been in entanglements on Twitter with both Spencer and the NPI, I did enjoy watching the NPI account shut down for breaching Twitter Terms of Service.

After being expelled from Hungary in 2014, Spencer was been prohibited from coming to the UK or any other EU country. The home secretary believed:

“In doing so [expressing his views], you would be committing listed behaviours and would therefore be behaving in a way that is not conducive to the public good. You are therefore instructed not to travel to the UK as you will be refused admission on arrival.”

This year has not been a good one for Richard Spencer. 2017 has seen him removed from the Conservative Political Action Conference. This removal was a notable public humiliation as, when Spencer was giving an interview to reporters in the lobby of the Gaylord National Resort, Ian Walters, the CPAC spokesman, said that “his views are repugnant and have absolutely nothing to do with conservatism or what we do here” and hd him removed from the hotel where the conference was taking place. Walters went on to further describe Spencer as “vile”, “venomous”, “horrible” and “repulsive.”

It was Richard Spencer who led the Nazi torch lit protest in Charlottesville, Virginia to protest the removal of a statue depicting Confederate General Robert E Lee. Spencer led the crowd in cries of the phrase “Blood and Soil” (Blood and soil or “blut und boden” was a Nationalist chant used by Nazis in WWII).

As mentioned above, Spencer’s aim is to create a “white homeland” by means of “peaceful ethnic cleansing”. For North America, he wants to create what he describes as a White Ethno-State (a state/nation which has a single shared heritage/ethnic ancestry).

Much like David Duke of Ku Klux Klan fame, Spencer is a major supporter of Donald Trump and hailed his victory in the 2016 Presidential election as “The Victory of Will.” This was picked up by some to be a reference to a film called “Triumph of the Will” by Leni Riefenstahl, which was a Nazi propaganda film.

Spencer does depart from Trump’s policy of access to birth control (including abortion) in that he agrees there should be freely available access to birth control for all. However as might be expected, there is a bigoted, racist reason for this. Spencer believes that birth control would mainly be used by People of Colour and Hispanic people which would reduce the populations of these communities in the USA.