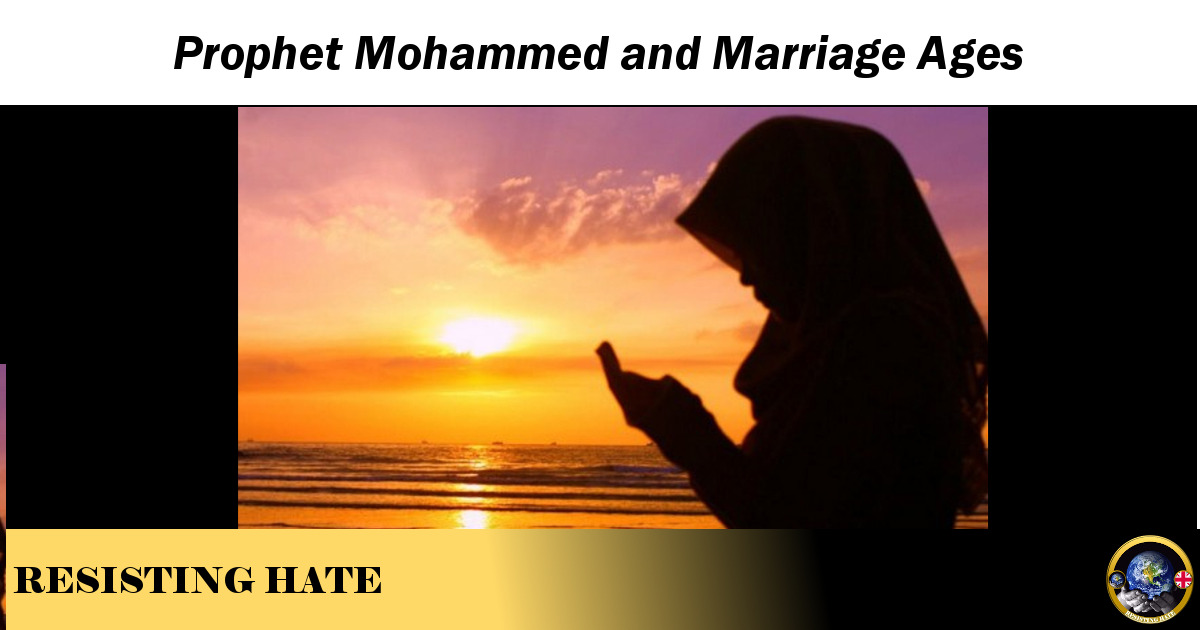 Articles with a religious focus at Resisting Hate are always written by a practising member of the faith in question so we were delighted to give one of our Muslim members an opportunity to discuss a topic that regularly comes up in debate on social media and which is often used to attack Muslims by the far right.

One of the weapons used by the haters of Islam is to say that the Prophet Mohammed was a paedophile since his second wife, Aisha was very young, by today’s standards, when he married her.

Aisha’s age at the time she was married to Muhammad has been of interest since the earliest days of Islam, and references to her age by early historians are frequent. Child marriage was not uncommon in many places at the time, Arabia included. It often served political purposes, and Aisha’s marriage to Muhammad would have had a political connotation.

According to Hadith sources, Aisha was six or seven years old when she was married to Muhammad but remained with her parents with the marriage not being consummated until she had reached the age of nine or ten years old which is interpreted by many observers to indicate that she reached puberty at this age. However, other Muslim authors who calculate Aisha’s age based on the more detailed information available about her sister Asma estimate that she was over thirteen and perhaps between seventeen and nineteen at the time of her marriage.

It is impossible to know with any certainty how old Aisha was. What we do know is what the Qur’an says about marriage: that it is valid only between consenting adults. We must assume, therefore, that, by the norms of those times, Aisha was considered an adult. In fact Aisha had been engaged to someone else before becoming engaged to Mohammed so must already have been considered eligible for marriage.

In 1254, Edward I married Eleanor of Castile when she was 13 years old and she gave birth to her first child within the year.

In medieval England Christians were allowed to marry from puberty onwards, generally seen at the time as the age of twelve for women and fourteen for men. Parental consent was not required. However there were still exceptions, in 1364, Alice de Routclif of York was either ten or eleven when she married John Marrays (whose age is not noted).

In the Semitic tradition, betrothal could take place earlier than puberty, perhaps as early as 7-9 years, but the marriage was not supposed to be consummated until the girl menstruated.

Traditionally, across the globe, the age of consent for sexual union was a matter for the family to decide, or a tribal custom. In most cases, this coincided with signs of puberty, menstruation for a woman and pubic hair for a man.

Sir Edward Coke, Barrister in 17th century England, made it clear that the marriage of girls under twelve was normal, and the age at which a girl who was a wife was eligible for a dower from her husband’s estate was nine years of age.

The American colonies followed the English tradition, and the law was more of a guide. For example Mary Hathaway of Virginia, was only nine when she was married to William Williams.

In the nineteenth century, the minimum age of consent for sexual intercourse in most American states was still only ten years. Even today there are many countries where the age of consent is well under 16 including notably Japan at 13, Nigeria at 11 and the Phillippines at 12.

Of course, and thankfully, the world has moved on and we now find the idea of underage marriage disturbing but I just seek to illustrate that using the age that the Prophet Mohammed married Aisha as ‘evidence’ of paedophilic tendencies are entirely spurious as it was perfectly normal at that point in time.