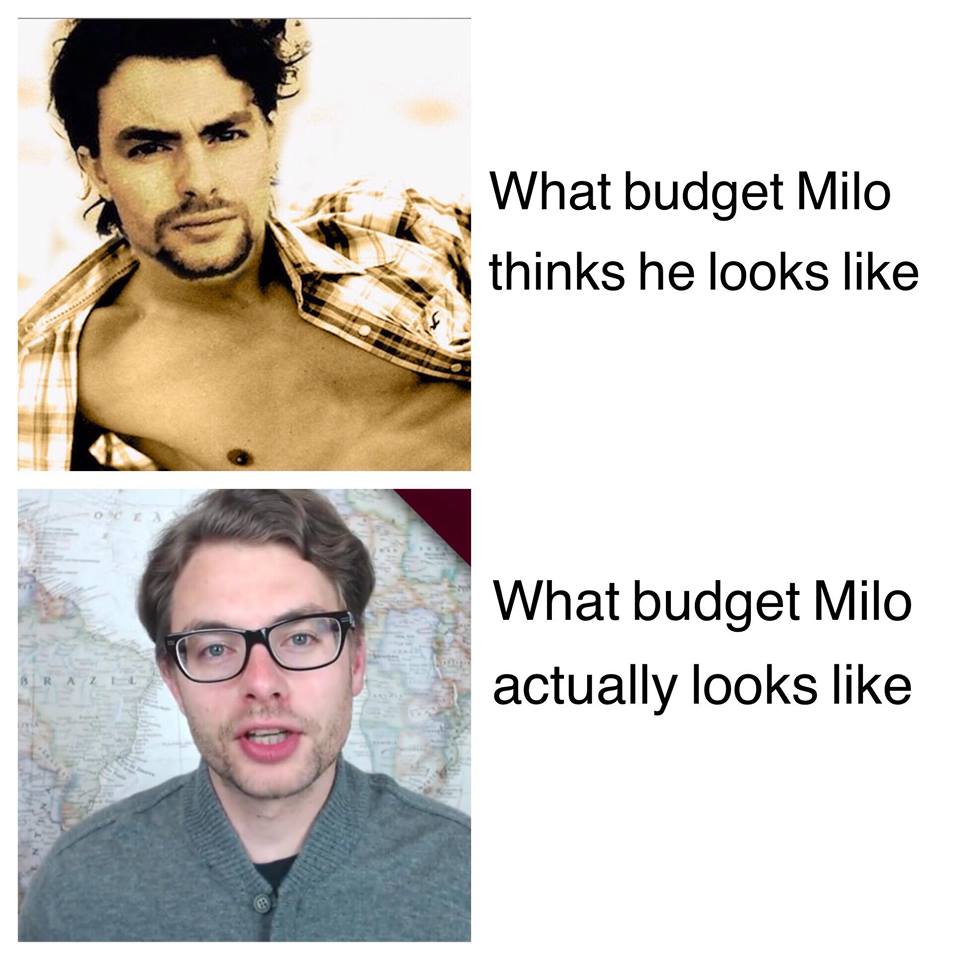 Today our featured hater is Budget Milo himself, Paul Joseph Watson – aka @PrisonPlanet.

Some of you may have seen his videos, short snappy little numbers where he rants and raves about “lefties” and “the evils of Islam”. He has his own YouTube Channel with quite a following of people who like his posts. He has in excess of 750,000 people and over 160,000,000 views since starting his videos.

Back in November 2016 Watson stated that he considered himself to be a member of the “New Right” rather than “alt-right”. He had commented previously that he was libertarian but ceased that self description saying that Gary Johnson (ex Republican who went on to be nominee for the Libertarian Party in the USA) made the word one he didn’t want to be associated with.

Watson was originally from Sheffield and moved from there in November 2016 to Battersea in London. From his London premises he has established himself as a public supporter of Trump but usually concentrates on attacking Trump’s opponents. To give a good example he pushed on with the “news” that Hillary Clinton had brain damage despite this being confirmed as a hoax. This clearly shows that far from being reliable, Watson does very little fact checking and often ends up with egg on his face.

In addition to the Clinton news, Watson also wrote and posted an article regarding Donald Trump using racist and sexist language which was allegedly caught on a recording made by the Secret Service. Rather than fact checking, Watson published the story on the InfoWars website. This was actually a hoax news story which was created to a Scottish gentleman. Details of the publication are on the BuzzFeed Site.

In February 2017, when news of “mass rapes in Sweden by immigrants” hit far right websites and Facebook pages, Watson posted a tweet offering to pay for any reporter to visit and stay in Malmo in (what he called) crime ridden migrant suburbs. Out of all the people who said that they would go, he chose a man called Tim Pool who got $2000 from Watson. The Huffington Post did a report on their conversation with Pool on the 21st February and looking at the comments Pool has made so far Watson may well get a different response to the one he was likely hoping for.

A quick scan of the website Watson writes on (“Prison Planet”) gives a clear idea on his stance in relation to society. Recent stories include:

1. The Deep State War on Trump
2. Proof: Muslims Celebrated Terror Attack in London
3. My Last Ever YouTube Video
4. Facebook Helps Pakistan Identify Thought Criminals
5. Joking About Nazis Makes You a Nazi, According to the Left

Now, as you can imagine, these posts are mind numbing and full of opinions dressed up as facts. Also, he posts a hell of a lot of content which is just plain fake (as well as using a confusing combination of upper case and lower case words in his titles). I did get hopeful about post number 3. I was hoping that it was going to be about him planning to disappear but no such luck. This was a clickbait post where Watson asked people to share it as much as they could because the ‘establishment media’ is pressuring YouTube to censor Alex Jones and Paul Joseph Watson as they are ‘extremists’.

Unfortunately it wasn’t Watson’s last video and he has actually made a further 7 videos in the last 6 days. (Wonder if he can be got for a breach of promise…?

In addition to plain old Islamophobic posts, Watson also shows he is both racist and a clueless conspiracy theorist. Now, we would never accuse anybody of racism without proof so our rationale of the accusation is as follows:

On the 5th January 2017, the Black Lives Matter group were accused by the far right of being involved in the kidnap of a white man by 4 black people, who were arrested the previous day. They used the hashtag #BLMKidnapping when talking about the kidnapping despite no actual connection having been made between the Black Lives Matter group and the 4 people arrested. Watson was one of the first to post, tweeting his followers to use the #BLMKidnapping hashtag to get the report trending. When he subsequently wrote an article about the case, he included a shot of his tweet but didn’t mention Black Lives Matter or how he tied them to the kidnapping, despite a further tweet being posted by Watson describing the victim as a “BLM torture victim”.

As you can see, Watson is obsessed with conspiracies, especially those relating to the Sandy Hook massacre. This is all something that needs to be kept in mind when listening to his rants about Muslims, rape gangs and the laughable “evidence” he tries to provide for ‘creeping sharia.’

Unfortunately, a lot of people believe the stuff that Watson writes, which sadly says as much about the people who share his stuff as it does about Watson himself. Hopefully as more people realise he is so poorly informed it will reduce the number of people who share it online.