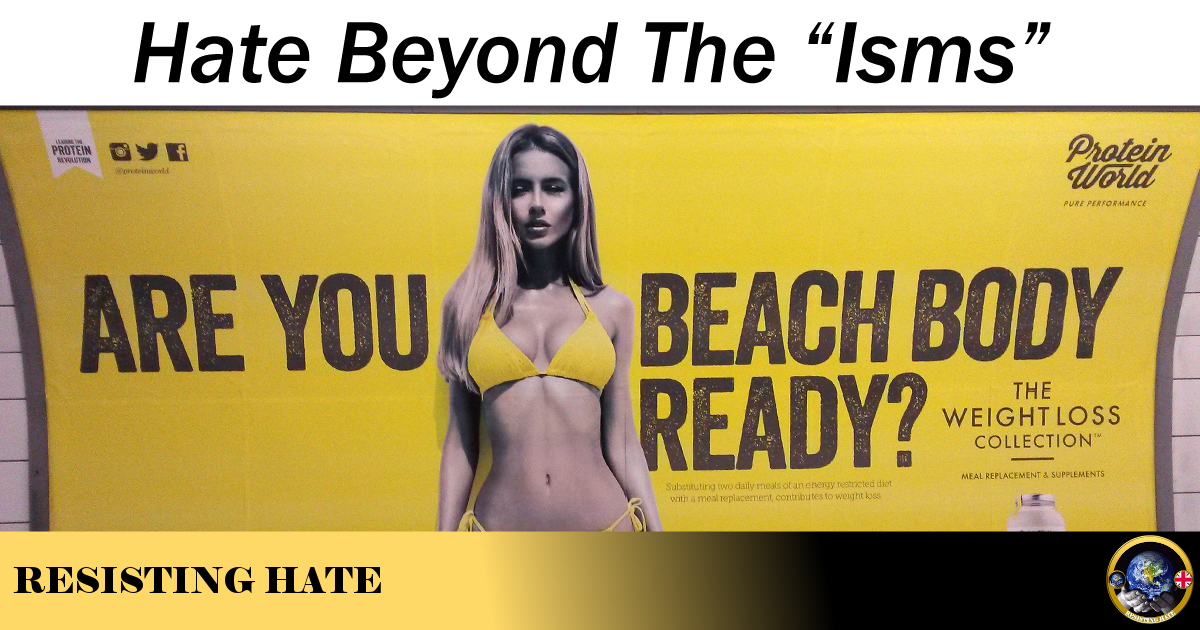 Most of the issues that come the way of our anti hate group Resisting Hate can be broken down into one of four key areas – Anti Semitism, Islamophobia, Homophobia and Racism. Hate trends come and go but fighting these key areas forms the basis of the majority of the work that we do.

However it is easy to lose sight of the fact that in our post Brexit, post Donald Trump world, religion, race and sexuality are not the only sticks being used to beat members of our society with. We are starting to see condemnation and abuse directed at a wide range of people who do not fit the emerging conservative stereotype relating to what is fast becoming considered “normal”.

I came across this personally the other week when it was suggested by a far right detractor that the fact I practise Paganism would lessen the credibility for our group because it is a “crackpot, made up, New Age practice”. Leaving aside the fact that Paganism in some form or another predates all the world religions it was a comment that surprised me as it suggested my ability to discern and tackle hate was somehow impeded by the fact that I believe in and work with elements that differ to those of the predominant faiths in the country. The criticism was clear – my belief set is different so I must be wrong, stupid or mentally impaired.

Discrimination against lifestyle choices is causing a lot of trouble for people who wish to actualise their individuality. Only last week in America  a top Trump health care appointee wrote about a supposed link between tattoos and drug addiction. Also in America this week, amidst much student outcry, a school decided to “slut shame” its female students by issuing a flier as to what nature of prom garment would and would not be considered admissible attire for the school prom night.  These examples are clearly legitimising the concept that it is ok to judge people by their appearance. All those years of telling our children to look at the book not the cover appear to have been wasted as it is apparently now perfectly acceptable to make a snap shot judgement of a person based solely on their physical appearance.

Physical appearance, especially in the form of body/fat shaming, is one of the most problematic growing forms of hate on the internet with a concern that it may be a contributing factor in both young men and women developing eating disorders.  Social media sites have made it easy to comment anonymously on the appearance of others and I have personally seen images with (literally) hundreds of derogatory comments all aiming to undermine the confidence and self-esteem of the individual posting their picture.

Sexism too is on the increase. The pussy grabbing US President has established a new low in the attitude to women in society. It is now common place to see memes on Twitter promoting a return to “old fashioned values” when the woman ran the home, raised the children and played no part in the workplace. These regressive attitudes are in danger of undoing the equality that women have fought for and, if we are not careful, will lead us back to a world where women are objectified and seen as inferior to their male counterparts.

The left wing have come in for a particularly rough ride recently (and I definitely speak from experience on this one). Progressives, Liberals and “Lefties” have been attacked with venom on every social media platform. It is perhaps for those they see as the greatest threat to their conservative dystopia that the far right reserve the greater part of their vitriol. Our group receive hate mail on a daily basis simply for speaking out about defying hate. The death threats some of the Antifascist groups receive are unprintable.

Many social prejudices are against a choice made by an individual but I have recently observed two hate trends that particularly churn my stomach, all the more repellent for the fact they are discriminating against something over which the individual has no control.

The first is Trans hatred. The Independent reported in 2016 that Trans related crime has increased by 170%. This may well be attributable to the obsession the media has with who uses what bathroom but is more likely due to the ignorant belief that people undergo gender reassignment surgery as a lifestyle preference.  Education explaining that gender surgery takes place to correct an individual’s body to match their true gender would combat a lot of this hate but, as is too often the way with ignorance, it is the wrong facts getting posted time and time again on the internet.

I am equally appalled at the upsurge in violence and abuse toward homeless people. Few things scream scumbag more than the people who find it funny to abuse others simply for a downturn in their personal circumstances. Seeing regular reports of homeless people tormented is sickening and a sad indictment on humanity in 2017.

The resurgence of hate may look like we have a bleak future but it is not all bad news.  Hate crime laws have been changing for some years now to keep up with the imaginative new ways human beings keep finding to discriminate against each other. In 2013 it became a hate crime to discriminate against individuals identifying with different musical sub cultures (including goths after the horrific murder of Sophie Lancaster)  and this month in North Yorkshire misogyny has been reclassified as a hate crime. There are also calls for acts of abuse against the homeless to be reclassified as hate crime and prosecutions for people committing acts of violence toward people with disabilities are up 40% which the CPS confirm is indicative of the fact that hate toward those with disabilities “will not be ignored.”

As our laws evolve to reflect the general public disgust with those who discriminate against and abuse others they will act as a deterrence for haters which will protect further abuses taking place. But the best way to eradicate hate is to educate our next generation. Parents and Teachers – your role in this will be invaluable. Teach our children that kindness, not hate, must form the backbone of the world we want to live in.