I have never encountered a person who does not object to the presence of child groomers in society and nor do I ever expect to. The abuse of children is one of the few subjects where the left wing and the right wing are in perfect agreement. It is always wrong to harm a child. It is always wrong to sexualise a child. There are no exceptions to this.

Child abuse is abhorrent not just for the act of pain and terror inflicted on a child but for the long term consequences resulting from it. People who have been abused as a child talk about how the effects never leave them. It can result in long term trauma, a loss of trust and an inability to form relationships. Child abuse can blight a life forever. This is why many believe that the sentence for a child molester should be the same as the sentence for murder. Both criminals are effectively stealing a life.

It is a natural reaction upon hearing of the abuse of children to be angry. Frankly I would be concerned about anybody who could read about the subject and not feel anger. Anger is a normal human reaction to hearing about the abuse and harm of the innocent. And that anger has power. Channelled in the right way our common human revulsion at those who would seek to harm our children can be a powerful tool. However it is imperative that the anger is channelled in the right way and toward the right people.

This is where I break with the right wing. I am as angry as they are when children are harmed but I am not willing to put innocent people at risk by blanket-blaming entire communities for the actions of the few.

The first is entirely incorrect and can easily be disproven by looking at the court cases for child abuse over the last 2 years. Recently convicted white paedophiles include Huw Thomas, convicted for possessing extreme child pornography and inciting a child into sexual activity. They include Brian Hudson who sexually abused three young children and they include Andrew Barlow who groomed a young girl in Bexhill. This is a list of all the paedophiles convicted in this year to date in Merseyside who are, in the main, not Muslim men.

The second erroneous extremist belief that ‘All Muslims are abusers’ is clearly nonsensical but has far reaching implications when these lies are repeated and believed. Resisting Hate actually saw a social media post the other day (below) suggesting that ‘white people’ know committing a sexual act against a child is wrong but Muslims do it because they believe they have a right to do it. If you ever needed an example of the consequences of hate rhetoric then look no further than social media, it is awash with the lies of the cynical and the gullibility of the vulnerable. 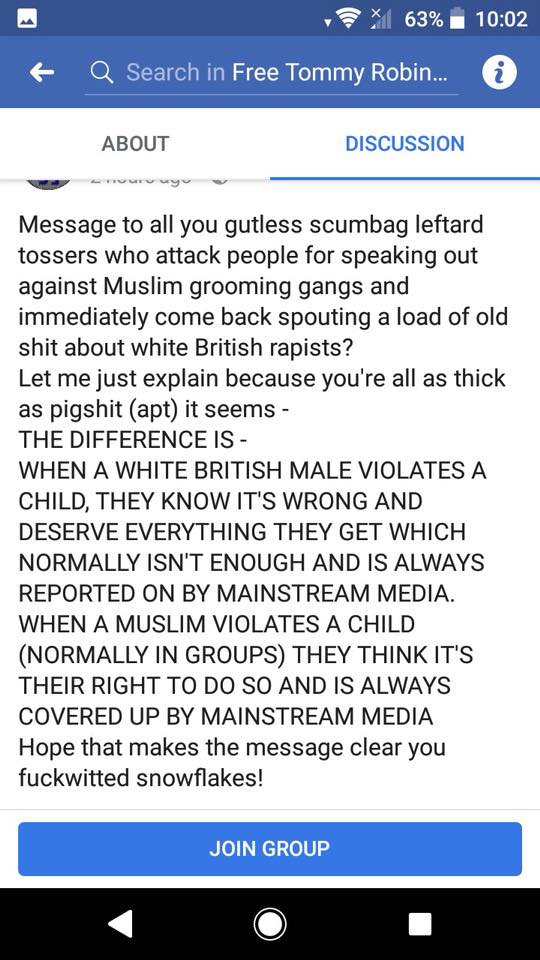 The far right try to justify their anti Islam agenda by making a distinction between solitary child abusers and grooming gangs, the latter of which they believe to be exclusively Muslim/Pakistani.

This belief is also not true. This group of four raped children between the age of 2 and 15 over a period of thirty years. This paedophile network was exposed after a mother sold her eight year old son to members of the inner circle. Nobody can deny that paedophile rings and grooming gangs include Pakistanis and Muslims but it is incorrect and inflammatory to say that they are made up of these communities exclusively.

In addition I would argue that child abuse is child abuse whether it is a lone pervert or a gang of perverts. Cheap point scoring to attack all members of a faith based community does nothing to tackle the problem of child abuse and achieves nothing but causing civil tension and divisions between communities. If you want to stop child abusers (and we all do) then focus on tackling the causes of child abuse. Stigmatising an entire community only puts more innocent people in danger.

There is a misconception that the law does not do enough to tackle child abuse and grooming gangs. The recent furore over convicted fraudster Stephen Yaxley-Lennon’s arrest for ‘reporting’ on grooming gangs resulted from the erroneous far right belief that the Government and the judicial system are failing in the battle against child related crime. Only Robinson, the far right assert, has the guts to speak out about grooming gangs.

Except that isn’t actually true. Because the alleged groomers that Robinson was spouting about were on trial at the time for child related offences. So Robinson wasn’t bringing these men to the attention of the law, they were already very much under legal scrutiny and going through the correct process to establish guilt or innocence.

If Robinson genuinely was exposing a hidden subculture of child molesters, I would not be involved in working to shut him up on social media. If he was actually involved in bringing perverts who would harm children to justice, then, hell, I’d even back him. But he isn’t. There is not one single example of Robinson alerting the law to any individual paedophile or group of paedophiles. He obstructs British justice by risking the cases of those the law has brought to trial and he ignores every example of non Muslim related child abuse to further his aim of whipping his followers into anti Islamic hysteria.

Child abuse is evil. We know that. Harming and abusing children is as low as human beings can sink. But it needs to be tackled properly. Baying for blood in the frenzy of vigilante justice or accusing all Muslims of being involved in abuse just distracts from the real issue of identifying the individuals who abuse children and bringing them to the attention of the legal system.