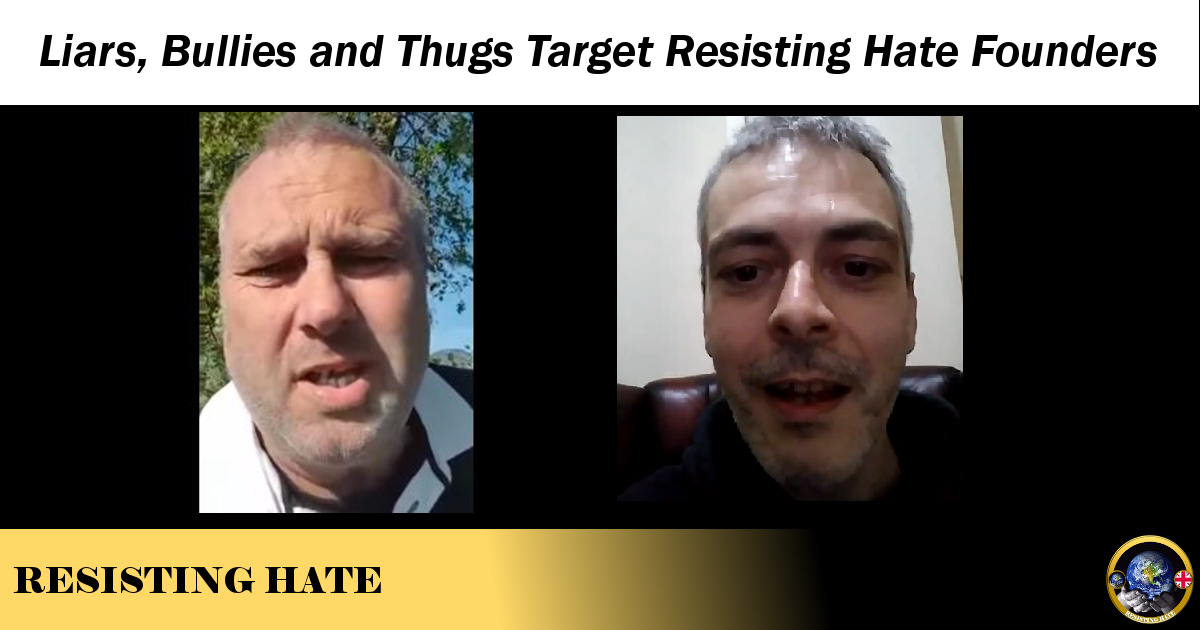 It is rare I bother addressing any of the threats I receive. Being a co founder of an anti hate organisation it is sadly part of the job to expect death threats, rape threats and abuse. And I get them, daily. And usually I just ignore and delete. But I am making an exception with this article as I believe the systematic, vicious trolling I have been the victim of for the past two years warrants a detailed public exposure and a response.

There are several perpetrators of this trolling gang and Resisting Hate are working on identifying them all. To date however I am only comfortable releasing the names of two individuals whom I can prove are involved. I will update with the names of the others as and when I can be certain we are naming the correct people.

The individuals pictured are (left to right) Steve James and Ryan Breheny. Both have been reported to the police for their behaviour toward myself and others.

Over the period of the last two years this trolling gang have abused me online, visited my house, body shamed me, sent pornography to my neighbours, sent the media lies about me, mass emailed my fellow anti hate activists with lies about me, contacted my landlady to tell her I am ‘running a brothel’ , made threats of violence toward me, stolen my private pictures and posted them on the internet, posted my home address, told lies about my husband being ‘a nonce’, lied about members of my household being internet trolls, sent me hate mail, made abusive phone calls, kink shamed my husband and best friend for their BDSM lifestyle, made false allegations to the police that I expose myself in playgrounds, made false claims I am a ‘jihadist’, made threats against my life, forged tweets, made sexually suggestive parody accounts of me, tried to claim I run troll accounts, tried to claim internet trolls are part of Resisting Hate and sought to smear myself and Resisting Hate at every possible opportunity.

Occasionally they admit that ruining Resisting Hate is their goal:

I am going to evidence in some detail the harassment I have been subjected to, including screenshots of the many accounts Steve, Ryan and the rest of their witless gang use for harassing purposes. I am then going to post a series of social media posts from both Steve and Ryan showing the type of people they are and why these bigots attracted the attention of Resisting Hate in the first place.

A false claim was made against me that I expose myself in children’s parks. This caused an officer from Derbyshire Police to come to my home. They used a stolen twelve year old picture.

They told the police I am a ‘jihadist’

They sent stolen (not nude as claimed) pictures of myself to a network of anti hate individuals and organisations. The purpose of this was to discredit Resisting Hate as an organisation.

They discovered I had been nominated for an anti hate award and spammed the organisers with malicious emails.

They contacted my landlady and lied that I ‘run a brothel’. I involved the police at this point.

They made a parody account of me soliciting for pornographic photography sessions with photographs of my home.

Numerous examples of body shaming. (Ironic as given the pictures of Tweedledum and TweedlerDumber they are no oil paintings themselves)

They deliberately and falsely named my housemate as well known anti hate activist ‘Monkey’ in an attempt to blackmail me into handing over the activist’s true identity.

They sent pornography to my neighbours and local shops.

Barefaced lies. I don’t even know what Steve is referring to here!

Then of course there are all the threats of violence…

This is why myself and Resisting Hate oppose Ryan Breheny. He is a Racist and an Islamophobe.

As can be seen from the videos below, Ryan has a bit of a drug problem

It may or may not also come as a huge shock that Ryan has an unhealthy obsession with weapons.

This is why myself and Resisting Hate oppose Steve James. He is a Bully and a Misogynist.

Would you like to hear from Steve? Steve has a bad habit of drinking far too much then making abusive phone calls. Everybody needs a hobby I suppose.

Frankly these degenerate trolls disgust me. They play the victim and pretend they persecuted by Resisting Hate and other organisations who seek to stop them spewing their venom across social media. Above is the filth they think they should be allowed to post freely without criticism or censure.

No member of this trolling gang has ever been able to produce anything I have done or said that I would not be happy to publicly put my name to. The best they have is ‘Roanna’s husband has made BDSM films’ (perfectly true, I don’t have a problem with it) and Roanna has friends who post mean things on the internet (Yep, I have a very wide range of acquaintances and contacts and I acknowledge that some people do go too far when expressing their views. However I am not accountable for the content of others, particularly those who are not members of Resisting Hate).

This tirade of personal abuse has been one long pointless attempt to silence me. They want to scare, shame, intimidate or threaten me into closing down Resisting Hate. They fear Resisting Hate because we have challenged, exposed and de-platformed key figures on the far right.

They have not succeeded in silencing me or Resisting Hate and they never will.