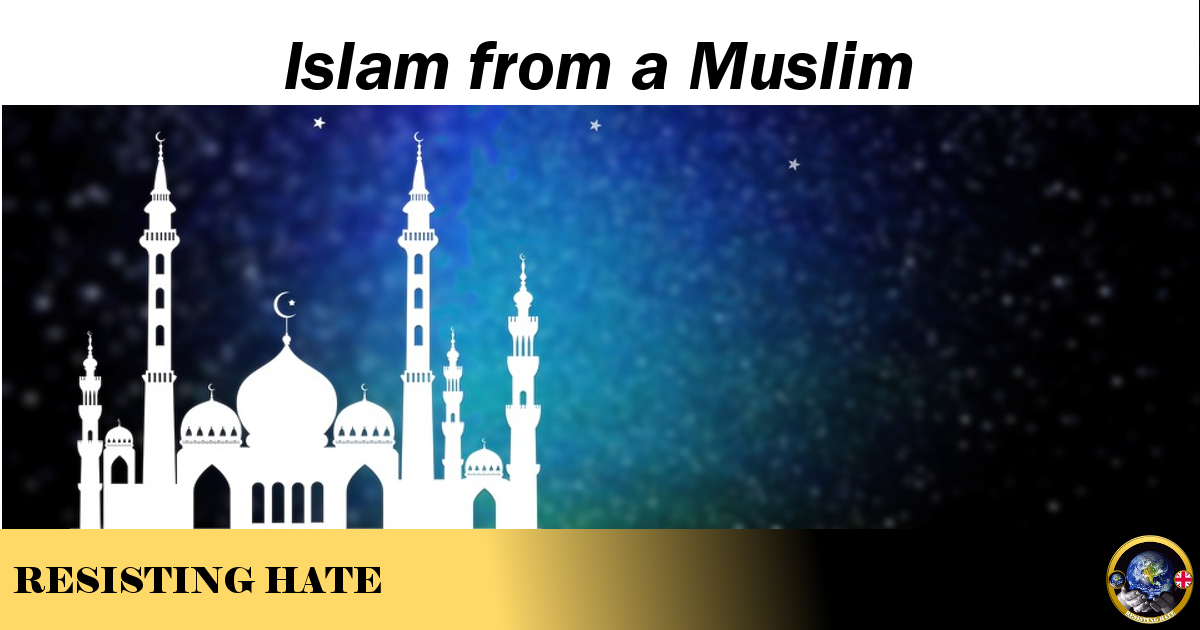 Thank you to a Resisting Hate member who has taken the time to write this post about the true nature of Islam and why it is never compatiable with terrorism.

Islam is the world’s second largest religion yet it is also one of the most misunderstood. For various reasons – be they political, economic, biased media or fear of the “other” – mistruths and misconceptions have been spread about Islam. The key to understanding Islam and Muslims is to resist stereotypes and to examine each situation according to Islamic teachings and authentic sources.

I would like to discuss the most popular misconception about Islam, and that is “terrorism”. I’m not trying to debate or compare religions. My intention here is to clarify and deliver a true message of Islam way of life.

I’m just a normal guy. I’m not a scholar nor do I have a college degree in theological studies.  I’ll deliver my message my own way, as a Muslim. And if there’s something wrong in my post I’m gladly take any criticism or correction in order to educate myself to become a better Muslim.

The media generally portrays any Muslim who fights as a terrorist, regardless of whether they fight justly or unjustly, or whether they are oppressing others or being oppressed.

In war, the targeting of innocent non-combatants is a despicable act which Islam clearly prohibits. In fact, Muslims are not allowed to destroy plants and animals unnecessarily, let alone innocent humans. However, it is important to distinguish between terrorism and legitimate resistance to occupation, as the two are very different.

The Quran clearly demonstrates the seriousness of killing an innocent person, or killing oneself like a suicide bomber and emphasises the value of human life.

“And do not kill yourselves [or one another]. Indeed, Allah is to you ever Merciful.”

God has made life sacred for human beings, and it is mentioned in Quran:

“Come, I will rehearse what God hath (really) prohibited you from”: Join not anything as equal with Him; be good to your parents; kill not your children on a plea of want;- We provide sustenance for you and for them;- come not nigh to shameful deeds. Whether open or secret; take not life, which God hath made sacred, except by way of justice and law. This has He instructed you that you may use reason.”

So, we cannot easily take a life.

Here is a glimpse of some of the Islamic rules of war based on the Hadith of Prophet Muhammad (PBUH):

What does the above list tell us? Take a look at our modern-day concepts of war. How many innocent civilians have died as the result of combat? Do our armies always care about the elderly citizens or the refugees? Where has the mercy, respect, self-restraint, humbleness and righteousness that define us as “human beings” gone? Why each and every day do we lose more of our  humanity by allowing these unacceptable act to continue without restraint?
The answer is simple, money and power.

The most famous and finest example people who followed the Islam rules during war is Salahuddin Al-Ayubi.

The killing of innocent civilians by suicide bombers and terrorists is strongly condemned in the Quran. Taking any life—except in the course of justice, is forbidden. Even so, capital punishment is discouraged. Thus, those who commit these horrible acts are clearly not Muslims, rather very evil people who try to justify their hatred and actions using God’s name.

If you want me to explain about current situations in the world where terrorist and suicide bombings happen frequently then I can explain to you no longer. Because that is no longer a matter of religion but a matter for politics and human greed. Terrorists use the concept of religion only as an attempt to justify their horrific and inhuman actions. Millions of people around the globe have died because of the actions of these religious pretenders.

2 thoughts on “Islam from a Muslim”