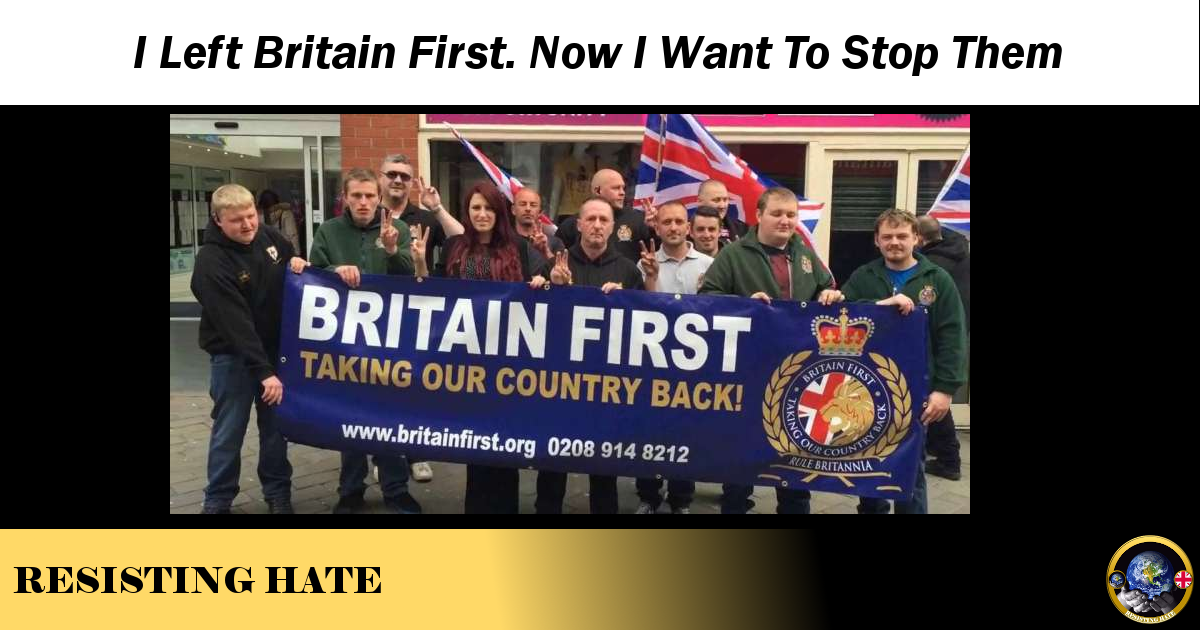 Guest article by a former member of Britain First

Hello, my name is James Crow, I’m from Rotherham in South Yorkshire and I’m a former member of the far-right group Britain First, I’ve decided to write this article to tell you all about my experiences in the far-right, why I left and what I believe needs to be done to properly oppose the far-right today.

So, how do I get involved in the far-right? Well, it all started with a simple Facebook video that was shared on my timeline by a friend The video was of a protest in Rotherham Town Centre by a group calling itself “Britain First” they were protesting over the recent Jay Report that had been published highlighting the grooming gang scandal that had just hit my hometown. There seemed to be hundreds at the rally and it captivated me, seeing these powerful people giving speeches, I listened to every word as they tried to turn the crowd against the Muslim residents in my town.

The speeches really impressed and angered me. At the time I was still a student in school, I think I was in Year 10 or 11, I was suffering through constant bullying for over 4 years at that point and I was starting to have mental breakdowns and entering into deep depression with suicidal thoughts. At first it wasn’t too bad as after I left school for the day I would just lock myself in my room, listen to music and forget about it until the next day, but after I got Facebook that all changed, now it didn’t matter if I was at school or not I would still get messages, calling me all the names under the sun, I would get into fights and school, I would report the bullying to the teachers and still nothing would be done to deal with my bullies.

The most anyone got was a detention after one of the bullies threw me into a staff room. But I would get put into Isolation for defending myself against the bullies. It really felt like the establishment had it out for me.

I remember on the last day of school, I only had 2 lessons and an exam then I would be free! Before I went to school that day I smuggled a knife into my school bag. I had lost hope and wanted to dish out some pain on those who bullied me. Luckily though when the lesson came around that I planned on doing it in I had second thoughts.

After school was done I completed college and then got an apprenticeship, I had been watching Britain First for quite some time and now that I was 18 I decided to sign up as an activist, I filled in an application online and a few weeks later, a skinhead from Barnsley called Jeff got in touch. Before I knew it I was travelling around the country, taking part in protests, rallies and whatever chaos Paul Golding and Jayda Fransen wanted to cause that day.

I could go on for hours about all the stories I learned and the experiences I had while I was in Britain First. But what I will say is that over time I became very fed up with poor leadership from Paul and Jayda. After a new recruit started threatening me and Paul refused to take any action I chose to leave Britain First for good.

I would then go onto join Generation Identity for a few months before ultimately not agreeing with their white supremacist view of the world and choosing to leave that group as well.

Just before Theresa May stepped down as PM I went down to Parliament to protest for Brexit, while I was down their I met Femi, I had a brief debate with him over Brexit where he completely destroyed my views. He recorded it for his social media but I don’t think he uploaded it because of how cringeworthy it was, there were multiple times when he would bring up points and I would just have no response.

This was the moment I saw the error of my ways, I realised that my right wing views were just anger going back from my time in school and I decided to leave the far-right.

I was in the far-right for 3 years and I want to use that experience for good, so after a lot of thinking I came up with a good strategy that has been adapted for the way the modern far-right operates. Unfortunately, in my view the modern far-right are no longer just the knuckle dragging alcoholics who chant “Allah is a Paedo!” on a demo.

A new tactic had been formed that makes the job of an anti-fascist a lot harder. Now the far-right want to get the word out on social media, where they can reach millions at the click of a button. Great work has been done by Resisting Hate and other groups, getting accounts reported and taken down, which is one of, if not the best way of stopping the far-right, forcing them into echo-chambers where they have a limited reach.

From a protest point of view, the far-right have changed strategy, while some groups still like to organise a ‘big’ rally in a City Centre against whatever the far-right are mad about that week, some have started more direct action. The most recent example of this is Britain First going into hotels housing asylum seekers and knocking on every door in the hopes of confronting people who have come to Britain, escaping persecution from their homeland, hoping for a better life.

Other organisations have taken to direct action. When I was in Generation Identity myself and two other activists put on white t-shirts covered in fake blood and lay on the floor of a Manchester Train Station after a Muslim man stabbed people there. We had a sign next to us saying some racist slogan.

These activities are a lot harder to oppose as they are usually over and done with in a matter of minutes and are rarely announced beforehand, therefore I believe a new strategy is needed. I believe we need volunteers to go into their local towns or areas which the far-right may want to oppose (e.g. Mosques, Halal Slaughterhouses etc.) and keep an eye out in case a far-right group turns up to cause trouble. If anyone did turn up to cause trouble a quick message could be posted in a Whatsapp group or a Facebook post, asking people to head to your location as soon as possible to disrupt their activities.

It would be great having big networks that could communicate and gather intelligence of far-right activities, ruining their plans at every turn, it would take a long time to set up but the end goal would be worth it.

Finally, and in my opinion the most important thing we can do to stop the far-right is infiltration of these groups, Britain First, and other groups such as Patriotic Alternative do everything they can to keep their plans secret, if people infiltrate these groups and after a few months start leaking information to anti-racists it would seriously undermine their credibility, making members untrustworthy of each other.

This is dangerous though and if you decide to do this you should let somebody know where you are going to be on a activity just in case your cover is blown and you need to get yourself out of a situation. Infiltration should only really be done by people who have little to no history in politics just in case they try to research you. It also does great work for lowering the morale or the far-right, they don’t know who to trust, the person they consider their best friend could in fact be passing information to anti-fascists.

Of course they are many ways to slay a beast, but going from my experience in the far-right I can tell you that these will be the most effective.

If you aren’t comfortable with being on the frontline on the streets you can sign up to Resisting Hate’s emails who regularly send out campaigns of fascists that need deplatforming.