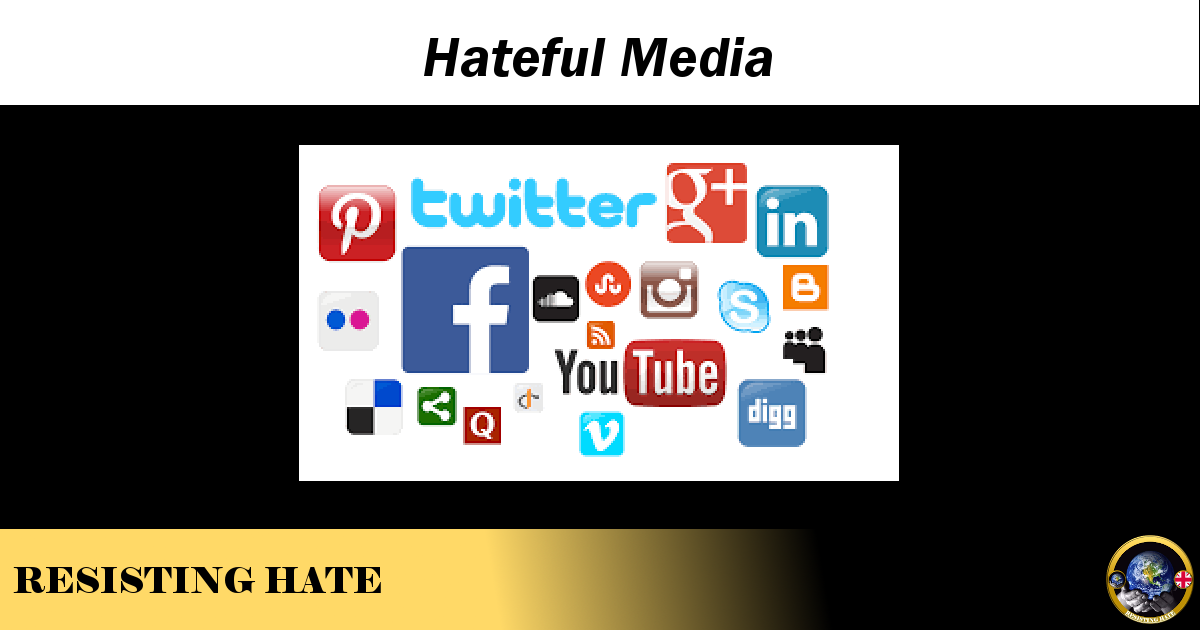 This is a guest article, first published here and reproduced with permission from the author.

I have already discussed fascism in my article previously published on Resisting Hate and I detailed how the characteristics of fascism are reflected in the modern world. But without the means of propagation, fascism along with other extreme ideologies, would rightfully remain on the fringes of society, scorned by most and only embraced by the most deranged flotsam in the sea of humanity.

The emergence of these ideas into mainstream consciousness has accelerated with the explosion in social media usage. Extreme ideas are disseminated covertly under the guise of divisively written news items, opinion pieces or simply comments responding to a mainstream source.

Social Media sites are infested with accounts set up purely to spread hatred and herd unsuspecting consumers towards fascist or other extreme ideologies. The accounts may belong to individuals who have accumulated vast numbers of followers, alternative “media outlets” or even extreme political groups. The accounts will often share the stories from the same unreputable sources, increasing the reach of fake or exaggerated news, and in the eyes of the consumer, making the items more trustworthy. Cross sharing posts also helps to ensure that the accounts gain the same followers, unifying their message of hate.

Typically, these extreme accounts will exclusively post news where the perpetrator is a particular group. These days, the target is commonly Muslims.

The stories will often be 100% true, but it is the relentless targeting of Muslims which is the problem. Relying on such accounts for news consumption results in a skewed world view where it seems most of the ills of the world are caused by Islam and its adherents. Crimes which we know are committed by all groups, whether it is simply fraud and robberies, through to vile rape and murder, will seem to be mostly perpetrated by Muslims. Barbaric events occuring in Muslim majority countries will push the notion that Muslim culture is incompatible with the West. Posting videos of Islamic events taking place in the UK such as Ashura, or simply of Muslims praying in public, is done with the intention of making Islam seem like an alien invasive force, threatening the existence of “British culture”. Muslims are framed as the  “other” – a homogeneous group lacking individuality and humanity.

The process of dehumanisation is an important target of extremism – whether this is the far right dehumanising religious or ethnic groups, or Islamic extremists dehumanising non believers.

Additionally, there are the ultra-extreme accounts which deliberately post fake stories and videos in order to inflame hatred towards the target group.  These accounts may not last too long before being banned, but often achieve what they set out to do. Once a fake story or video is out and shared enough times, it is impossible to retract.  For every consumer of the fake story who learns the truth, there will be hundreds of consumers who never learn and accept the fake message.

Take for example a post I saw some time ago by a prolific Islamaphobic Twitter account based in Canada.  The user posted a video showing some tanned individuals laughing and abusing a dog by throwing the animal over a high fence.  The sound was distorted to make it difficult to make out what they were saying or the language being used. The user captioned the video to indicate that the individuals were Syrian refugees in Germany.  Of course, this prompted a torrent of outraged replies expressing their disgust at Syrians, refugees and Muslims. It seemed that trying to outdo each other, repliers to the thread escalated what they believed to be the correct punishment for the perpetrators and refugees in general, suggesting they should be incarcerated, deported, tortured or killed.  However, the video was not of Syrian refugees in Germany, but was actually of drunk Israeli teenagers in Tel Aviv. This was identified by one viewer of the thread and even linked the news article (https://www.haaretz.com/.premium-18-year-old-arrested-over-dog-abuse-video-1.5355017).  Unfortunately, in a thread with over 500 replies and a video which had been shared over 2000 times, it is unlikely that the truth was seen by more than a handful of people – a victory for the extremists and a useful contribution to their aim of spreading hatred against Muslims.

It is worth at this point, mentioning that these methods of dehumanisation and creating an enemy are nothing new. Propaganda has been disseminated by more traditional means for centuries to achieve the same aim. Even in recent decades, both tabloid and “respectable” press continually publish divisive sensationalist headlines designed to outrage the public in as few words as possible and encourage a purchase. Outlets such as the Daily Mail are notorious for this, and their contribution to the hateful environment in which we find ourselves should never be underestimated.

By often reading such press, and following Hate accounts, consumers find themselves submerged in a rancid swamp which distorts their view of reality. Every post they see is designed to prompt outrage at “the establishment” or ill feeling towards other racial or religious groups. They feel like their eyes have been opened and that they are uncovering a world hidden by the mainstream. They feel like they have found the truth and are part of a cause, fighting against evil “global” forces. While treating mainstream news sources with suspicion, they will unquestioningly absorb articles from the purveyors of hate, their world view shunted so far to the extremes that they will ravenously devour opinions which regular people would balk at.

It is in this environment which leaves the Hateful Media user teetering on the brink of fascism, and most susceptible to the final steps of radicalisation. Most of the time, people will go no further, and may even pull back from the brink as real life experiences soften their views. However, an increasing number of people, perhaps those with a limited real world social life or a circle of friends of homogeneous mind, will step over the brink. Whether they themselves seek out interaction with extremist groups, or whether they are groomed by extremists, the consequence is that they enter the dark dangerous world of extreme activism from which it may be difficult to return from intact.

It is for this reason that any decent person, anyone opposed to extremism should be mindful of the intentions of the accounts they follow. Hateful media should be reported with the aim of removal. The extremists will claim this is an infringement of free speech. No, hate speech is not free speech – such actions are required in defence of our tolerant society and are a means to protect our vulnerable people from radicalisation, whether that be from fascists, Islamists or any other extremists vying to inflict their hateful ambitions on the public.